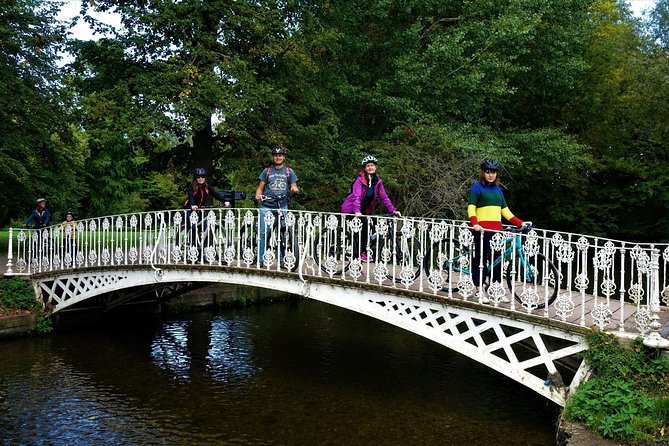 This is a fascinating bike ride, free of traffic, with a maximum group size of 7 people, along a charming river with plenty of stops to admire some of South London's most beautiful parks, wildlife, waterwheels, a local market, cottages, churches and an ancient village that became part of London. You will also stop at a marvelous 17th century pub for lunch/refreshments. An enthusiastic local guide, who has been living in the area for over 20 years, will meet you at his hundred- year- old house and lead you along winding paths on this 4 hour/12 mile/20km long relaxed ride through a mesmerising part of London where once a church stood as big as Westminster Abbey and a King was crowned. Are you ready to enter a peaceful world of lush greens and serenity? Only a short distance away from the busy centre of London a different world is waiting for you.

INR 5,187
p.p. onwards
Meet your guide in the morning at his 100 year old house only a one minute walk away from Colliers Wood underground station in South London. You will be provided with a bicycle and a helmet before setting out on a 12 mile trip lasting around 4 hours. We will start off admiring old cottages along a river, that was once known as 'Europe's hardest working river', because of the amount of waterwheels that operated here. We will stop at London's only still working waterwheel which is now part of a local market and you will learn about an important monastery that included a massive church and once inhabited this site. We will continue along winding paths to one of South London's most beautiful parks, steeped in history and you will learn about the industries that made some inhabitants of the area incredibly rich. We will than follow the river to an ancient village which became a part of London but has kept it's charm and and has one of the United Kingdom's tallest tree and ponds full of wildlife. We will stop at the fantastic 17th century village pub before turning back.

star star star star star
Amazingly, the trip was all in London, but the parks and trails we rode through felt like the country. Stefan was wonderful to talk to, very knowledgeable about the area (and even had keys to open one of the mills.).

star star star star
Stefan was a cool guy and it was a nice scenic cycle, also the pub he took us to served great food only negative is it was quite expensive.

star star star star star
Amazing ride through gorgeous countryside with a native who is knowledgeable and interesting. Of all our london tours our time with Stephan was tops!

star star star star star
Being invited into the home of our guide as he matched us up to our bicycles, getting acquainted with a family of four who would be traveling with us, and witnessing the guide educating us on the history of the villages, the national trust, the waterways, and the buildings on our path was fascinating. We could not tell we were in London due to the peaceful paths, foliage, water features, etc that we rode past. Having the group stop for lunch at an old, old vintage pub was an extra surprise and delight. I would highly recommend this experience. As for feedback to consider: Ensure each of us has a water bottle or brings one to the onset of the experience. Ensure that each bike is equipped with a water holder. Consider having at least one E bike for those with joint issues so they can still ride and enjoy the experience with their family/friends, etc.

star star star star star
All through parks and countryside, and visiting very interesting historic old mill sites. Visiting a very interesting community park area, where we chatted with the older gentleman who has created this beautiful artistic garden nook in the city out of what used to be an abandoned garbage area. We stopped and had a relaxing lunch at a pub before we headed back. I rate Stephan's bike tour the best in London that I've experienced! Stephan was very nice and interesting to talk to. Very relaxing and delightful.

star star star star star
Beautiful parks, history, waterwheel mills. Very nice to be to see many things including the above parks, former industrial history plus the fauna and flora.

star star star star star
The Bike Tour is a unique of its kind with the polite and cheerful guide Stefan. You get to see some very beautiful parks in South London, historical places and London's only operational waterwheel. The best part of these parks is that they look like countryside or track through a forest or beautiful gardens! Stefan knows the place well and takes good care to ensure you have a good time. Thanks Stefan!

star star star star star
Wonderful bike ride. Went as family of four. Very friendly host, very knowledgable, great to see parts of London that we wouldn’t normally see. Lovely bike ride, no hills, nice countryside, it didn’t seem like we were so close to the city centre. Enjoyed stop off at water mill and the pub.
Previous Next
keyboard_arrow_up