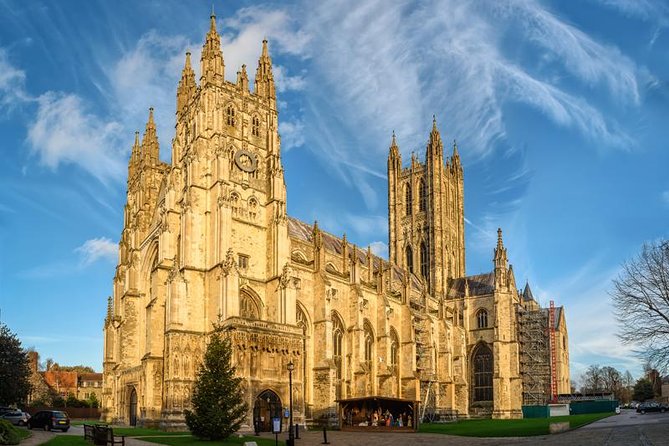 Join us on a 11 hour small group, maximum 16 people, day tour from London, to Canterbury, Dover and Kent Villages. This tour takes us through the county known as the "Garden of England". We will travel through time - literally, with a visit to Greenwich where GMT began. Then out deep into the beautiful Kent countryside and a stop in the glorious traditional Kentish village of Chilham. Following Chilham we take the scenic route onto the famous White Cliffs of Dover where we descend down to the shore for spectacular views along the coast and up at the glistening white cliffs immediately behind us. On from the cliffs we head to Dover Castle, where you can explore and see over 2000 years of history, from the Roman era church, to the Medieval embattlements and tunnels dug during WW2. Then on to the city of Canterbury, with its world famous 900 year old cathedral. Visit the cathedral and join us on a guided walking tour of Canterbury before our return to London after a full day exploring.

Itinerary
This is a typical itinerary for this product

We make a short stop in Greenwich on our way out of London. Greenwich forms part of our natural route out of the city and is a great place for us to stop and grab a coffee and use the bathroom before we get out into the countryside. Admire the Cutty Sark - a famous restored 19th century tea clipper sailing ship. Hear stories of Kings and Queens visiting, and learn about the observatory that gave birth to Greenwich Mean Time (GMT) and see the famous Royal Naval College.

Wander round this beautiful example of a traditional English village. Full of charm and centred around a village square, with a church, pub and tearooms. Chilham is perhaps Kent's most beautiful village

We bring you down to the shoreline under the world famous White Cliffs of Dover. One of England's most iconic natural locations, and a welcome sight for soldiers and pilots returning home from warfare in history. Stroll along the pebble beach with the cliffs behind you, and weather permitting, a view 20 miles across the English Channel to France.

Explore this glorious medieval castle - describes as the "Key to England". Huge defensive significance throughout English history, and in use as a defensive position since the Iron Age 3000 years ago, also used by the Romans - evidenced by a Roman lighthouse on the site - the most complete standing Roman structure in England. You'll have a couple of hours to visit this incredible castle - perhaps have a bite to eat in one of their cafes.

We spend 2.5 hours in Canterbury. Time to explore this famous English city, perhaps do some shopping, have a bite to eat or a drink in one of it's many charismatic pubs. Perhaps take the time to visit the spectacular UNESCO world heritage site cathedral - the enormous 11th century Canterbury Cathedral. Later, join your guide for a walking tour of the history and highlights of Canterbury, hear stories of Chaucer and the founding fathers, follow in the footsteps of pilgrims visiting the shrine of Thomas Becket, before we head off