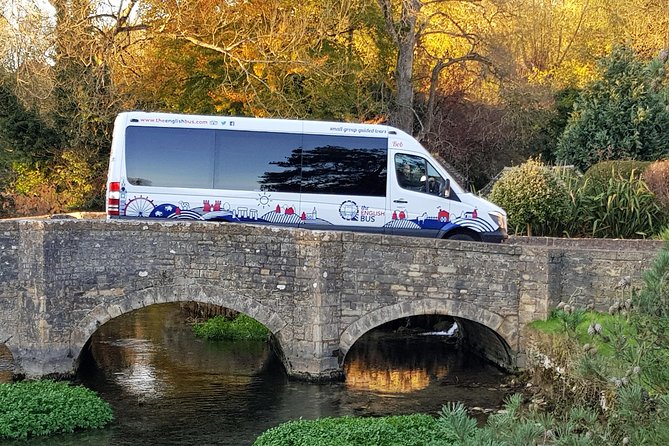 Explore Oxford, Stratford-upon-Avon, and the Cotswolds, and discover the best of England in one day on this small group tour, maximum 16 people, from London. Visit historic Stratford-upon-Avon with a guide and learn of the life of William Shakespeare — widely considered to be England’s most famous poet. Spin through the pretty countryside to characterful Cotswold villages, where life ticks by at a relaxing pace. Then, explore the medieval city of Oxford — home to one of the world’s oldest universities and join your tour guide for a walking tour to learn and see more. Tour includes guide and round-trip luxury mini-coach travel from central London.

London Eye departure point 08:45
Join us at our first pick up point for this tour, from the corner of Belvedere Road and Chicheley Street, near the London Eye. See departure point information for more details. Departure time: 8.45am
Starting point:
London Eye, London SE1, UK

INR 8,946
p.p. onwards
Itinerary
This is a typical itinerary for this product

Visit the world famous beautiful historic town - birthplace of The Bard - William Shakespeare. Explore the charming streets, shops and cafes. Stroll along the River Avon. Visit Shakespeare's birthplace if you wish, and see the huge RSC theatre. Your guide will show you round the town, and detail it's fascinating history and culture.

Explore the buzzing Henley Street - home to William Shakespeare and family in the 16th century.

Experience the most beautiful and picturesque countryside anywhere in England. Rolling lush green hills, dotted with charming stone cottages. Fields, hedgerows, wildlife & flowers, this part of the country is stunning.

Pass through this charming Cotswolds town

Visit "England's most beautiful village" - as described by historic style champion William Morris. The is the ultimate in Cotswolds beauty. A perfect charming village with small stone cottages and a babbling trout filled brook running right through the heart of the village. Take photos you will treasure forever.

Walk amongst Oxford University's most famous, historic and beautiful buildings. Hear stories of the English speaking world's oldest university and some of the characters it has produced over the last 900+ years.

You'll have the chance to enter the house where William Shakespeare was born back in 1564 - resorted to it's 16 century character.

Oxford's most famous and breathtaking view

Admire the Cotswolds most famous and most beautiful row of stone cottages, set in the exquisite backdrop of England's most beautiful village - Bibury.

star star star star star
This was one of the best tours I’ve taken! Chris and Tony created an enjoyable and fun day visiting beautiful places and learning a bit of history. Their small group tours make for a more personalized experience, something you will not get on big bus tours. Everything was very well planned and allowed for just the right amount of time at each stop. Their guides are very knowledgeable and friendly. I plan to take more of their tours next time I visit the UK. I highly recommend The English Bus!

star star star star star
The reason we chose The English Bus tours was their 16-passenger bus. The smaller bus was perfect for driving through the hidden places of the Cotswold region! Johny Davies was a phenomenal, knowledgeable, and entertaining tour guide! Our tour was the highlight of our trip to Great Britain!!!

star star star star star
JOHNNY is hands down the best tour guide in the world. He is highly experienced, extremely knowledgeable, charismatic, funny/hilarious, and an excellent driver. He went out of his way to ensure we ALL experienced the best out of this tour. We'll ensure to look/book his tours only.... that's how great he is. Thank you for a fabulous tour. Andy and Zoila from USA

star star star star star
This small-group tour on The English Bus was perfect for travelling on country roads and through city streets, especially in areas of the Cotswolds where otherwise big tour buses couldn't travel. Andy was an excellent guide; he was very knowledgeable, entertaining, down-to-earth, and I loved how he added his own local flavor to the tour by sharing personal stories, tips, and opinions. The tour itself was a nice mix of commentary while on the road (kudos to Andy for talking and noting points of interests while driving for much of the day), walking on his guided tours at Stratford and Oxford, and free time to explore on your own. Highly recommend this tour!

star star star star star
My family of three really enjoyed this well paced tour. The mix of light walking and scenic drives, as well as guided versus unguided time to explore the areas of focus was great. Johnny was an engaging and informative guide that made everyone feel welcome and at ease.

star star star star star
This was an outstanding small group tour experience. Chris was a great guide: friendly, engaging and informative. We learned so much about the culture and history and heard interesting stories about the places we visited. Would definitely book another tour with The English Bus.