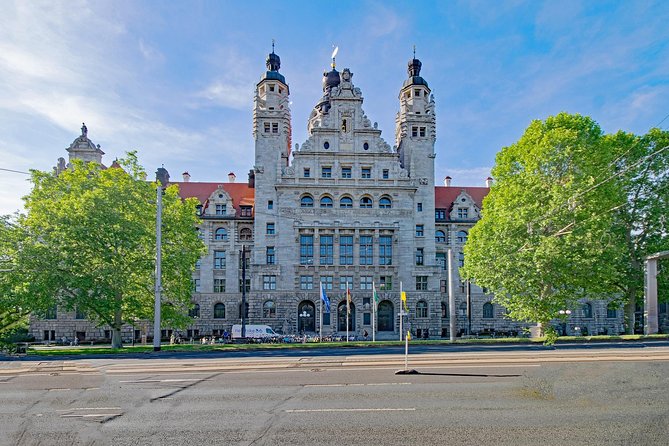 Meetingpoint: in front of the Old Town Hall or Meeting Point at hotel possible if central, without extra charge

INR 13,055
p.p. onwards
Itinerary
This is a typical itinerary for this product

Let’s begin our adventure into the hidden stories of Leipzig by meeting in front of the Old Town Hall, where you will learn about the town center of one of the oldest trade cities in Europe and the place where Napoleon was defeated. Here, you will admire the XVI century Renaissance building, still considered to be one of Germany's largest Town Halls. Built in only 9 months, this impressive building also houses the infamous local jail and torture chamber. Close by have a look inside Auerbach's Keller, one of Germany's oldest continuously operated pubs. Opened in 1525, soon became a very popular place, Goethe, the master of German literature, being one of its regular clients. From here go through the Mädler Passage that brings to life so impressively the architectural and historical grandeur of the renowned exhibition hub and trading center that is Leipzig City. Move on to St. Thomas Church and Bach Museum. This is the place where Bach worked as a cantor and also where he is buried, under a bronze epitaph, near the altar. Hear the stories about its famous choir and about its bells and their strike notes. Next we continue our walk to Nikolaikirche, Leipzig's largest church and also the starting point of the peaceful revolution from 1989, when its residents organized protests against the communist regime. Proceed to Augustusplatz, where you can see the main campus of Leipzig's University and also Krochhochhaus, Leipzig's first high-rise. Continue along Grunewaldstrase, passing by the Concert Hall, famous for its fine acoustics and continue until you reach Rossplatz, an area where you can see some Stalin era architecture. Continue walking on the boulevard to reach the New Town Hall. Admire the 114.8 meters tower that makes this the tallest city hall tower in Germany. Also, learn about the terrible stories of numerous mass suicides that took place inside during the final days of the Third Reich.

For a full refund, cancel at least 24 hours in advance of the start date of the experience.

Friday, 8 Nov, we took the Viator “Leipzig Private Walking Tour”. Our guide was Christine. We threw her a curve by announcing at the start that we were musicians and wanted to see everything related in Leipzig. I think she had planned the tour to show us the role Leipzig played in the revolution to bring down the wall and unite the two Germanies that occurred in the eighties. This was reasonable since Saturday, 9 Nov, was the thirtieth anniversary of the tearing down of the Berlin Wall. Although we threw her a curve, she gamely tried to do both. Unfortunately, the weather did not cooperate, and the day became rawer and colder as time went on and eventually it rained. Another complication was that it was impossible to cover all this in a two-hour tour. Christine did go over time but had another tour scheduled an hour after ours was scheduled to end. It should be noted that the Leipzig Tourist Information Office has a self-guided music tour and a self-guided revolution tour with guideposts all over town. Nevertheless, she at least showed us where a lot of things were which we could return to at another time. You can’t expect much more from a two-hour tour.