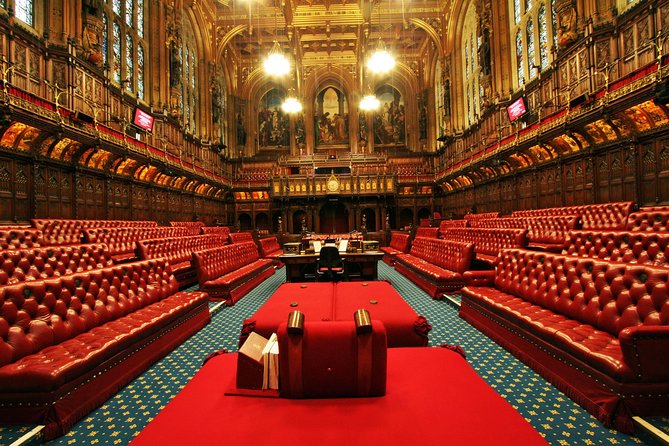 Spend a day in the political heart of London in Whitehall and Westminster with this tour that visits the mother of all Parliaments where modern the democracy movement got underway and evolved over centuries followed by a tour of Parliament Square and then on to the Churchill War Rooms where the fight against tyranny was overseen.

INR 19,121
p.p. onwards
Itinerary
This is a typical itinerary for this product

We will visit the House of Lords (Upper House), House of Commins (Lower House) and the original Westminster Hall... learning the history following in the footsteps of The Queen, Lord’s and Ladies as well as great leaders such as Churchill, Lloyd George, Thatcher and Blair.

Another term for the Houses of Parliament. Originally a Royal Palace before it became the Parliament we have today and you'll find out all about it.

The majestic upper chamber of the Houses of Parliament. It's beautiful purple benches, ornate wood carvings and gold encrusted throne is where each year the Queen opens Parliament.

The very famous lower chamber of Parliament where figures such as Lloyd-George, Churchill, Thatcher and Blair amongst many others have spoken at the Dispatch Box as you'll have seen on television.

Having left Parliament, we will visit nearby locations relating to Parliament, Churchill, WW2 and Democracy.

Our tour ends at the Churchill War Rooms with an audio tour of the preserved bunkers from which Sir Winston Churchill ran the war. You will see the famous battle map rooms, briefing areas, his personal bedroom and spaces as well as enjoying the interactive room... all deep below the streets of Westminster.

Portcullis House, London SW1, UK
Traveler pickup is offered
We can meet you at any Central London hotel or alternatively from outside Westminster Underground Station, right next to Caffe Nero.

star star star star star
I booked tickets for this because my husband is military history buff. I wouldn’t particularly have chosen to go myself but I actually really enjoyed it. The audio guide that it provide is excellent and gives you the flexibility to go at your own pace, choosing as much or little as you want to learn about. It was a well put together experience and I learned a great deal. Definitely recommend it.

star star star star star
Guide Martin Emery was expert re Parliament and Churchill and his commentary on landmarks and history during walkarounds was first rate. He knows and loves his subjects which immensely enhanced our tourist experience.

star star star star star
We had a smooth and stress free day exploring Parliament and the War Rooms. Martin shared so much wonderful information and history and got us exactly where we needed to be to enjoy line-free access to our tours. Highly recommend this tour if you want to enjoy some one-on-one attention and be spoiled by a local that knows the ins and outs of London!

star star star star star
Stephen is the most knowledgeable tour guide! He is a master historian and we appreciated his communication before, during, and after our tour. He tailored our experience to our needs and provided suggestions for activities that suited our group! Having an ACTUAL person contact me about the tour right away and communicate through the whole process was invaluable. The tour had to make some changes because of changing Covid restrictions and thanks to Stephen, we felt confident in the process. We were extremely disappointed the Parliament closed to tours, but Stephen made the most of it by showing us sites we would have never seen on a bus tour. One person in our group who has made many trips to London said this was the best tour he has ever taken. I'm confident any tour provided by Stephen would be excellent.

star star star star
This was my second visit to the war rooms and I found it fascinating. I used the London pass and it took forever to get in as those who had prepaid were on a separate and priority line.

star star star star star
Bought for my husbands birthday, the day exceeded our expectations. We were met at our hotel by tour guide Kevin, who’s knowledge and passion of historical London was inspiring . We look forward to more tours in the future. Many thanks for a memorable day. The Lloyds

star star star star star
Stephen was brilliant. My husband is a fan of Churchill so our tour was catered to his historical interest- my husband was thrilled. Besides the war history around Westminster, we visited several neighborhoods to experience some more colorful things, like where certain nobility have their tailored suits made and many interesting tidbits that kept the tour from feeling like a history lecture. We both enjoyed every minute and have already recommended this tour to others.

star star star star star
Me and my wife had an amazing tour. Houses of Parliament were fascinating better then we both hoped. We got so lucky with our guide Kevin, he is so incredibly knowledgable, friendly and so passionate about London’s history. Would definitely recommend Kevin and will ask for him In the future.
Previous Next
keyboard_arrow_up