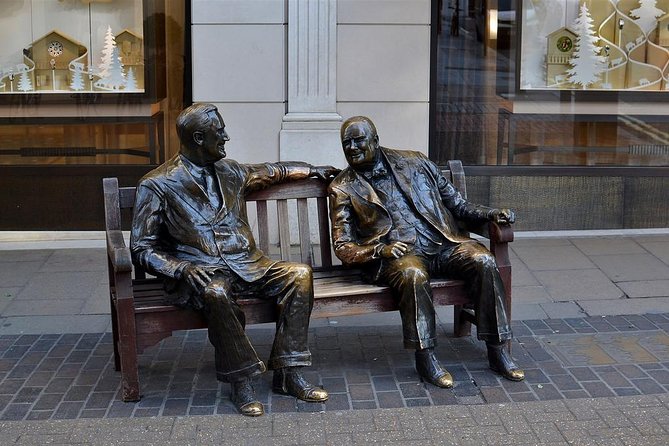 This one is for all fans and affecionados of our Greatest Briton of all time, war time Prime Minister, Sir Winston Churchill.

This walking tour takes around the streets of Picadilly, St James and Westminster and takes us to places that were important in the life of Churchill. Finally we finish at the Churchill War Rooms, the underground bunker from which Churchill ran the war and which are perfectly preserved to this day.

Our Churchill tour has even been featured on international television.

INR 12,487
p.p. onwards
Itinerary
This is a typical itinerary for this product

We will explore the Mile of Style as we make our way to the prestigious Mayfair area of London.

Perhaps the finest tailoring street in the world and we will see where everyone from The Queen downwards gets some of their clothing.

Perhaps the most auspicious tailors in Saville Row and with a typically Churchill story to tell.

Follow in the footsteps of Prime Minister Sir Winston Churchill. As he said, he is happy to please as he only wants the finest of everything and this is where you find it.

He will visit one of the finest tailors in the world where we can see one of the surviving Siren suits that Churchill wore during WW2 in the shop of the tailors who made it.

A chance to have your photo taken between the war-time Allies in one if London's most high-end destinations.

We will see the senior Royal Palace (above even Buckingham Palace) where Prince Charles lives today.

We will visit the Reform Club, one of the greatest Gentlemans Clubs in the world and find out about Churchill's time there.

Here we will see monuments relating to the Battle of Britain as well as the only 'NAZI' memorial in Britain and we'll find out why this incredible situation came about.

We will pass along London's premier ceremonial road.

We will visit this plush store where Churchill would buy his cigars. They also supplied Napoleon as well as British Royalty and much more, If the room is open, you can sit on Churchills smoking chair or get a unique Churchill or cigar related momento.

London's number one public square with its famous memorials to another British hero, Lord Nelson.

We will visit this famous military location and see the Citadel from WW2 and find out what it was for and why Churchill hated it.

We will visit the childhood home of Churchill and find out why his family we living there.

We will also learn about the Womens Cenotaph and find out the meanings behind the carvings on the memorial.

Get up close and personal with the offices where Churchill worked during WW1.

Stand outside the gates of Downing Street home of British Prime Ministers through the centuries from Churchill to Lloyd-George to Thatcher and Blair.

Our primary monument to remember our fallen from The Great War onwards.

The Mother of all Parliaments.

The Church where Sir Winston Churchill got married in.

We will explore Parliament Square and learn of its importance to politics and democracy. We will also see from the outside, the church where Winston and Clemmie got married.

Explore the underground bunker from where Prime Minister Sir Winston Churchill ran the war as London above was being bombed. Perfectly preserved as it was in 1945.

Take a photo of Churchill's statue and learn the story behind it.

star star star star star
Stephen was amazing! He was extremely knowledgeable and expertly navigated my mother and I through London despite the large crowds. We especially enjoyed the interesting facts that he would point out to us about the buildings and our passing surroundings, and was very gracious letting us stop to take many pictures throughout the day. Highly recommend this tour/tour company if coming to London!

star star star star star
Our guide Kevin has a lot of know-how and showed us places we would have never seen. The walking tour made also a lot of fun and we can highly recommend it as you will receive much more information than you expected- excellent job, dear Kevin!

star star star star star
Kevin was an excellent tour guide. He was so knowledgeable about English history and the buildings we walked by. We loved all the information we learned about Winston Churchill.

star star star star star
Stephen provided a most edifying and enjoyable tour - his considerable knowledge of the city and its history enhanced the experience. He anticipated our interests and clearly made an effort to get to know us to do so. A lot of walking but worth every steP. I highly recommend this tour with the personable and professional Stephen.

star star star star star
This tour with Kevin was PERFECT. It was everything we were looking for. Kevin was so knowledgeable and fun, and the tour was well adapted to us. My partner and I have both been to London many times, and we still learned so much and saw new things. It really was like walking around London with a local friend. We would definitely do it (or another theme) again.

star star star star star
Kevin did an amazing job of making the city and Churchill history come to life. He interwove all kinds of music and movie filming locations. So much fun and fascinating!

star star star star star
Kevin was a wealth of knowledge about London and Churchill. He took us to some hidden gems in the city and had lots of stories to share. He is an excellent guide.

star star star star star
A very immersive experience. We felt like we were taken back in time. A thoroughly enjoyable experience. Highly recommend it for those who are interested in World War 2 history and Winston Churchill’s life, especially his time spent as Prime Minister during WWII.
Previous Next
keyboard_arrow_up