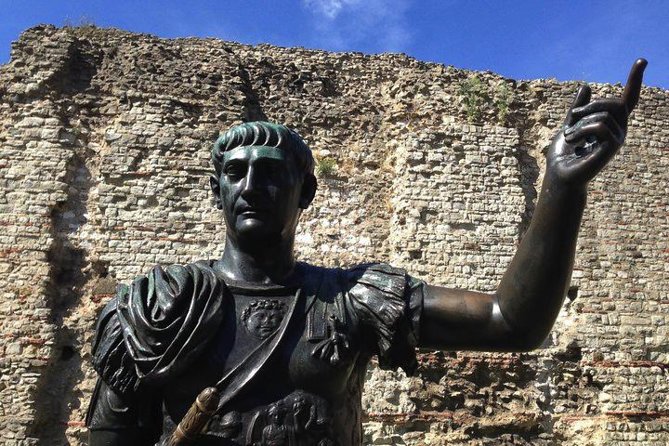 You don't have to go to Rome to see Roman ruins, or even St Albans,  Bath or York.  Though people were all ready living here, it was the Romans who founded the modern city of Londinium that through the millennia has metamorphosed into today what is possibly the greatest city in the world.

This private walking tour will take you to little visited spots in the heart of the City of London where the remains of Roman buildings can still be found, hidden amongst all the skyscrapers of the 21st century.

We will see hundreds of Roman artefacts before going underground to visit the old Temple of Mithras.

Learn about the legendary stone that is as old as London itself.

Here we will find possibly the only remaining part of the original Roman London Bridge.

We will visit the locations of the Roman Baths in London.

Stop At: All Hallows By The Tower, Byward Street, London EC3R 5BJ England

Not strictly Roman related but perhaps the most beautiful and peaceful ruins in London.

We will pass by the Tower of London, home of The Crown Jewels and just outside the old Roman City of London

This old Victorian market is built on top of its Roman predecessor and if we are lucky we might get to see a chunk of it where you'd least expect it.

We will visit several different parts of the old Roman Wall that at one time surrounded the city.

Standing in front of this magnificent old building is like being in ancient Rome.

The old official residence of the Lord Mayor of London

The beautiful old hall which is central to the ancient City of London Corporation dominates the square but if you look closer we will see the Roman connections.

Under the original Roman streets of London we will stand in the footsteps of Gladiators in the Roman Amphitheatre that was only discovered a few decades ago.

The very heart of old Roman London with its majestic and overpowering stone buildings.

We finish outside the Museum of London which has plenty of Roman history and artefacts inside. You're welcome to spend a few hours here or return to the nearest tube station just a few minutes walk away.

Saint Martins Court, St Martins Court, London EC4M, UK
Traveler pickup is offered
We can meet you at any Central London hotel not just those listed before going by Tube to the tour starting point.

star star star star star
Kevin provided an expert tour of Londinium. He's in fantastic shape so we had a complete workout walking all of the City of London and came away with many stories and factoids about Roman life in Londinium. He was helpful advising on getting around the city. We provided info to him he did not know about - St Helen's Bishopgate's association with Shakespeare in the 1590s.

star star star star star
Our guide, Stephen, showed a high level of enthusiasm as well as knowledge about ancient London and took us to see many ruins, a number of which would be difficult to find on one's own.

star star star star star
We are so glad we booked this tour during our London getaway. Kevin was our guide and he absolutely exceeded our expectations! My husband is a history buff who has lived in the UK before and visited London several times, yet he still learned a tremendous amount from Kevin. All the knowledge we gained about London’s amazing history added the depth and meaning to make our visit so much more memorable! Kevin led us down many winding streets, tucked away alleys, and down stairs beneath the city to reveal their past and secrets with us. The experience made us feel like explorers which was so much fun! The time seemed to fly by and we only wish we were staying in London longer so we could fit in another tour with Kevin. He was great company and an absolutely sincere and kind person to add. We highly recommend this tour!

star star star star star
Our host presented us with such knowledge of in-depth history on our tour, Wide range of topics around historic London. Providing us all with an abundance of information setting the scene for such a memorable day. Highly recommended.

star star star star star
My wife Stephanie and I had the pleasure of meeting Stephen for a pub walking tour through Central London over the Christmas holiday. Late pub closures due to Covid, did not slow Stephen down. We not only had a few pints, including in the oldest pub in London, but saw a side of London we never expected to see. A true expert and author, Stephen tailored the tour in real time based on what we liked and wanted to see. WWII, Roman ruins, plague pits, no matter what, he had us covered. Can't recommend him enough. Good luck with new book Stephen, great idea.... Marshall

star star star star star
It was great seeing things off the normal routes. Through alleyways and behind areas, inside churches etc. A number of places you just wouldn't know were there. Stephen arranged the tour extremely well to fit in with our schedule and I would recommend the tour to anyone. Thanks for sharing your knowledge with us. As it was a walking tour the extra titbits of information also added to the experience.

star star star star star
Stephen is so knowledgable! This private walking tour was a super experience full of history that the average person would never see or notice. Thank you Stephen!

star star star star star
A 28th wedding anniversary gift from my wife, we were blown away by Stephen's breadth and depth of knowledge of all things London (and Roman!) We would highly recommend the Roman London Private Walking Tour to anyone with even a hint of interest in the subject - there is so much more than one imagines!
Previous Next
keyboard_arrow_up