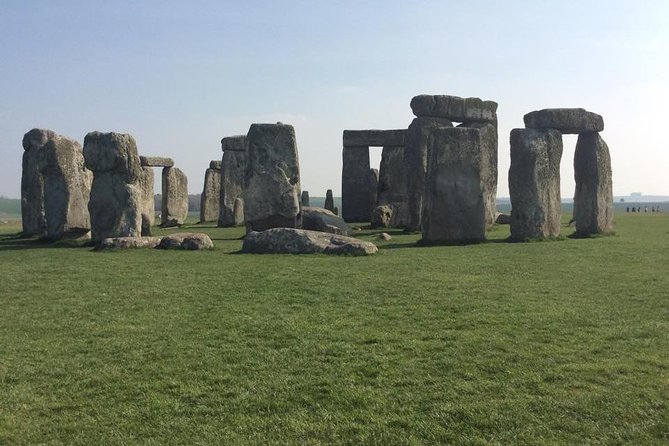 Private Full-Day Tour of Bath and Stonehenge from London

Take in two of England’s top UNESCO World Heritage–listed sites on this private full-day tour of Bath and Stonehenge from London. Follow a private guide through the old streets of Bath and learn what attracted the Romans here 2,000 years ago. Take in top attractions such as the Roman Baths and the beautiful Abbey, and admire traditional Georgian architecture along the 18th-century Royal Crescent. Then, delve into the Wiltshire countryside to prehistoric Stonehenge and hear the theories behind the stones’ construction. This tour includes round-trip travel from London in a private vehicle with English speaking guide. Romans Baths is with Audio guide which is compulsory with tours in the Baths.

INR 27,797
p.p. onwards
Itinerary
This is a typical itinerary for this product

See one of the most elegant streets in England.

Pass By: The Circus, At the Convergence of Brock, Bennett, and Gay Streets, Bath England

After parking up, we will walk through some of the beautiful streets of central Bath. If time allows then we'll pop into beautiful Bath Abbey but it looks incredible even from the outside.

Learn the history of why the Romans built the baths and what they were used for... it's not just bathing! See some of the many treasures that have been excavated around Bath and walk on a paltform just above the original Roman streets and deep underground from the modern streets above.

Parking up by the visitors centre, we will get the courtesy bus up to the stones themselves. Whatever time of day, whatever time of year and however the weather is, there is nothing quite like Stonehenge.

Traveler pickup is offered
We can pick you up from any Central London hotel, not just those listed above.

star star star star star
We booked a tour to go to Stonehenge and Bath, and our tour guide, Kevin Pearman was so exceptional. He called prior to our tour and suggested an early departure time if we were up to it (and we were) to avoid any crowds at Stonehenge. He was so right and we got to experience it at our own pace - it so exceeded out expectations. Kevin was so great at explaining the history and practices that happen to this day. Bath was awesome as well and Kevin, once again, navigated the tour after having talked with us during the day and knowing what we might find most interesting. We're going again and will reach out to him first!

Prepare for a long day, but very much worth the experience. We truly enjoyed our private tour as we feel we were able to take our time but be on schedule. Our tour guide, Stephen was prompt in picking us up at our hotel and was very knowledgeable. He made as feel very welcomed and excited to visit Bath and Stonehenge.

star star star star star
We had spent a full day touring Bath and Stonehenge with our tour guide Kevin and had a wonderful time. He was very knowledgeable and personable. We would love to have Kevin again as our guide when we book another tour through Viator.

star star star star star
We had a great day with Kevin! Just driving out of London we learned so much about places we had previously walked by. Bath was a fascinating visit - the engineering was incredible. Kevin filled in all the details of the aromas bath and the town. Seeing Stonehenge was incredible - it had been a long time desire. Kevin shared the history & highlighted parts of the scene we would never have seen without him. Kevin knows so much & shares it in a comfortable easy to understand way. Highly recommend this tour.

Great tour with a knowledgeable guide. Please don't hesitate to book this tour and visit stonehenge!!

star star star star star
My husband and I had a great day traveling to Bath and Stonehenge! Our Guide, Kevin, was delightful, providing us with all kinds of wonderful historical tidbits and information throughout the day. We never felt rushed and had plenty of time at the Roman Baths and at Stonehenge. I would highly recommend this tour and recommend Kevin as a guide.

Well, this trip was a surprise. My details said Professional Guide
Tour escort/host

I give Erin of Ye Old England Tours credit for being a driver and an escort but not more. She was it! She picked me up in her personal vehicle and drove. I was her third tour and she was not a guide, my audio was. Not bad but certainly not what I expected.