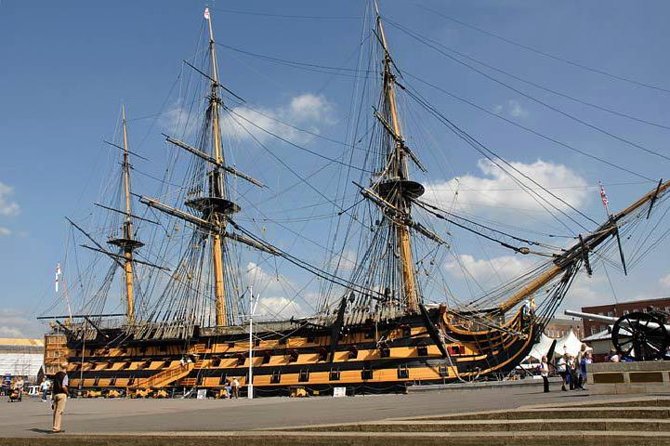 Delve into Britain’s rich maritime history on this 1-day Portsmouth Historic Dockyards and HMS ‘Victory’ tour from London. Follow a guide through the dockyards and learn of the ships who have fought — and sunk — protecting the British Isles. Discover famous vessels including Henry VIII’s flagship the ‘Mary Rose’, HMS ‘Victory’ — Lord Nelson’s flagship in the Battle of Trafalgar in 1805 — and the 19th-century HMS ‘Warrior’. Climb the rigging, learn of life on the high seas and explore centuries of sailing history. Tour includes round-trip travel from your London hotel.

CNY 3,076
p.p. onwards
Itinerary
This is a typical itinerary for this product

Explore a range of old Royal Navy ships, museums and shops with nautical themes and possibly see some current warships too.

The Mary Rose was the pride and joy of King Henry VIII but sank centuries ago, only to be recovered in a partially preserved state along with tens of thousands of objects. Now open to the public after decades of preservation in the worlds largest airlock.

HMS Warrior was the nuclear option of the Victorian era. The most powerful vessel in the world with a mix of wood and iron, sail and steam.

The oldest commissioned warship in the world. Flagship of the Royal Navy under Lord Nelson and most famous for its leading role in the heroic role in the Battle of Trafalgar.

Explore this perfectly preserved ship that saw action at the infamous WW1 battle at Gallipoli as a floating gun platform built under the orders of Winston Churchill.

Traveler pickup is offered
We can pick you up from any Central London hotel.

star star star star star
Just simply a brilliant day.... in fact it took us 2 days !! Staff extremely friendly, helpful and very knowledgeable. Hard to describe all the sights and how interesting it all is highly recommend Don't miss the Harbor tour . Also the Ultimate Explorer ticket gives you unlimited visits for a year, so no need to rush each exhibit. We plan to return to visit the submarine base at Gosport (included in ticket!)

star star star star star
If you are a UK resident then I recommend you buy the Ultimate Explorer ticket even though it is expensive. On leaving the ticket building you find HMS Explorer to your left. We went in and walked round finding it to be interesting. Before we left we were approached by one of the Curators (Mr William Knight) dressed in a Matelots uniform. He asked us if we had any questions? I very strongly advise you to search him out. His knowledge and the way that he explains the life of the sailors and the ship are incredible. We were lucky it was not a busy day on our visit and before we knew it we had spent 1.5 hours learning about the ship from him. He alone made the visit worthwhile and we will return to learn more. Search this incredible curator out. Our time was limited to one day with our family for this visit, so we moved on to HMS Victory which was interesting. Then we went to the Mary Rose museum where another incredibly knowledgeable curator "John" explained the artefacts including a leather waistcoat which was permanently imprinted with he rib cage of it's previous owner. These two fantastic curators meant that we had no time to visit the museums or HMS M33. It was for this reason I recommend the expensive Ultimate Explorer Ticket. Once again my thanks to William Knight and John. We will be back.

star star star star star
Portsmouth As fans of British Navy historical novels (Patrick OBrian, Hornblower, etc) and biographies of heroes like Nelson, we have always wanted to see Portsmouth and HMS Victory. This tour did not disappoint. Our guide, Kevin, was very well informed on not only the history of the port and Navy, but other cultural features of the area. He was an expert on logistics like where to go at which time for best viewing, etc. He guided us through the displays and threw in tidbits that only an enthusiastic fan of the sites would offer up. The HMS Victory was everything we imagined and the adjacent Mary Rose exhibit was an added bonus. It was a great day trip and we highly recommend Kevin and Ye Olde England tours.

star star star star star
Our Guide was Kevin J. Pearman. He was the BEST tour guide .... EVER. VERY knowledgeable of the history of the boats we toured, friendly and professional. Thank you Kevin for a wonderful tour.

star star star star star
It was so great to have a guide for our trip to Portsmouth! Mark was amazing, highly knowledgeable and made the day really special. Highly recommended!

star star star star star
You'll need more then a day to tour the Historic Area but lucky the ticket last for a full year, great value for cash. It would be wonderful if the Chatham Naval Dockyard and HMS Belfast joined up as one or offering a 50% discount on each other's ticket entrance fee. Despite that it's a great place to visit. The food halls are also good value for you cash.

Private tour is the only way to go to a place you know little about. Kevin, our tour guide, was wonderful! He had a passion for history and it really shined through! The dockyards were interesting but I enjoyed all the conversation the royals and Jack the Ripper also. Plus it was fun asking questions about cultural differences.

My guide and driver, Richard, was very knowledgeable about the history of the southern coastal communities, and the Naval History of Portsmouth, it's incredible sailing vessels, and Lord Horatio Nelson. Very enjoyable journey which left me wanting to visit other towns in the area, at some future date!