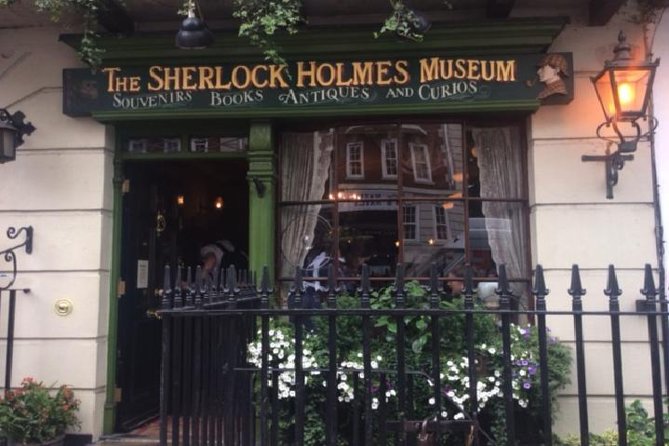 The original, oldest and best 'Sherlock' tour/ Immerse yourself in the world of Sherlock Holmes and Dr. Watson on this private 4-hour walking tour in London. Explore central London sites made famous in the filming of the BBC adaptation ‘Sherlock’, as well as places relating to the life of Sir Arthur Conan Doyle and some of the movies. Along the way, hear behind-the-scenes stories from the set and why locations where chosen as well as visiting some fascinating places along the way including New Scotland Yard.

We end at the real-life 221B Baker Street where you're free to visit the Sherlock Holmes House Museum or go on a Sherlock spending frenzy at the Sherlock Shop!
**We are proud to have recently been chosen by BBC Comic Relief to provide a very special Sherlock tour with special prize winners and Sherlock actors**

Stand in front of the famous New Scotland Yard and the revolving sign. Learn a little about the home of the Metropolitan Police, the oldest professional police force in the world and hear of how Sir Arthur Conan Doyle sought advice when creating the character of Sherlock Holmes

See sights used in the filming of BBC Sherlock

Stand on the spot of where much of the BBC publicity shots are done. See where Sherlock finds a washed up body on the banks of the Thames and the real-life history of this spot. For fans of Irene Adler, a scene was shot near by too.

Not only were parts of a pivotal Sherlock episode filmed here but we will learn about the real life Old Bailey and the nearby sights relating to executions and other gory things!

As we go on the tour, we will pass by several famous sights such as St Pauls Cathedral and learn a little of its history. Of course the front steps were featured in a recent Sherlock movie.

Enroute to our next spot we will see this famous place where Braveheart was executed along with others who weren't burned at the stake!

This was a location in a recent Sherlock movie. From the outside, we will visit this ancient spot that survived the Great Fire of London, see a Plague Pit.

See the spot where Sherlock fell from the roof and where Watson ran into the cyclist. Some fans like to lay on the spot and have a photo taken!

This beautiful square is where we first meet Dr Watson in Sherlock. There are good reasons why they chose this location which you'll learn soon.

Visit the street with the longest history of Sherlock Holmes on the big screen. It was here that the very first 221B Baker Street was filmed almost 100 years ago and it has been used in recent movies too!

See the place where Sherlock had his rainy night rendevous with the mysterious woman in the final season of Sherlock.

Visit the iconic location from Sherlock. Maybe pop inside and grab a drink and see some of the photos on the wall of where Benedict and Martin sit and eat. Next door of course is the door where they fi;m 221B in Sherlock and we'll tell you how and why they do it here.

We finish the tour outside of the actual 221B Baker Street. Here you have the chance to buy some Sherlock souvenirs or visit inside the Sherlock House Museum which is exactly as Sherlocks house would have been in Victorian days. Watch out for Professor Moriarty and that big bad Hound of the Baskervilles!

This where we find the home of Sir Arthur Conan Doyle. We will explore the streets of literary Bloomsbury and see the spot where Sherlock lived before he moved to Baker Street.

Westminster, London SW1A 2JR, UK
Traveler pickup is offered
We can meet you at ANY central London hotel or meet you at the starting point outside Cafe Nero by the exit of Westminster Underground Station where the tour commences.

star star star star star
My husband and I did the Sherlock Holmes walking tour with Kevin three weeks ago. Well, it was supposed to be the Sherlock Holmes walking tour but it was WAY MORE than that! The things we learnt about London were amazing and so many gems hiding in plain sight! Our guide was SO knowledgeable and interesting, we could have walked all day listening to his stories! If you only have one time to do one tour in London, this has to be it!!

star star star star star
It’s hard to say which part of this tour was the most exciting. Kevin, our tour guide made every part of the trip so interesting and our grandchild flipped over following Sherlock’s story. Wished we could have spent more time with kevin .

star star star star star
Stephen kindly adapted his tour to our requests - my husband for Sherlock Holmes, for myself for some of the older buildings and communities that merged over the years to form London. Stephen's depth of knowledge was apparent, but he adapted his tour to our level! He also shared lots of fun facts to keep us smiling. I would thoroughly recommend one of these tours, especially to people like us who used to commute into London for work, but who never took the time to really look at and think about all the history around us.

star star star star star
I absolutely loved this walking tour! Not only did I visit the show's filming locations (which was such a thrill!) , but I also learned so much about London's history. There's nothing like a walking tour to familiarize yourself with a destination. This is my 3rd time to London but through this tour, I definitely discovered more things compared to my past visits when I toured on my own. My guide Kevin was very knowledgeable, and was also the nicest and most patient guide I've ever met! I absolutely recommend this private tour to any Sherlock Holmes fan, and to anyone wanting to learn more about London! Another plus: the owner is very quick to respond if you ever have any questions or concerns.

star star star star star
A very interesting walking tour, specially for Sherlock's fans and for all who loves walking through London. Special thanks to Kevin, a very friendly guide.

star star star star star
Ryan was our tour guide. We love Sherlock and especially the BBC version with Benedict Cumberbatch. He is also a tour guide at the Sherlock Holmes museum. He knew a ton. Then when we went to 221 B Baker, he knew everyone so we were given lovely and special treatment. We did the store, but not the museum on the tour. In addition to all of the sites from the show and also historic Sherlock sites, Ryan knew a ton about London. He is patient and polite. Highly recommended if you are a Sherlock fan.

star star star star star
Our tour guide, Dewi, was very informative and fun. The Sherlock fans in our group loved all the locations and details of each given. For the not so much Sherlock fans, he was great about pointing out other sites, giving information and answering all of our questions. The tour took us all over London via walking (LOTS of it!), the bus and tube.We loved it!

star star star star star
This was an absolutely wonderful tour. Our tour guide, Stephen, was passionate and kind throughout - always keeping us interested along the way and happy to provide additional facts where they popped up. He knew the material extremely well and seem to have lots of knowledge and it was fun to ask him plenty of questions. He was flexible and able to help us arrange things so that they worked specifically to our needs and timetable. Recommended!
Previous Next
keyboard_arrow_up