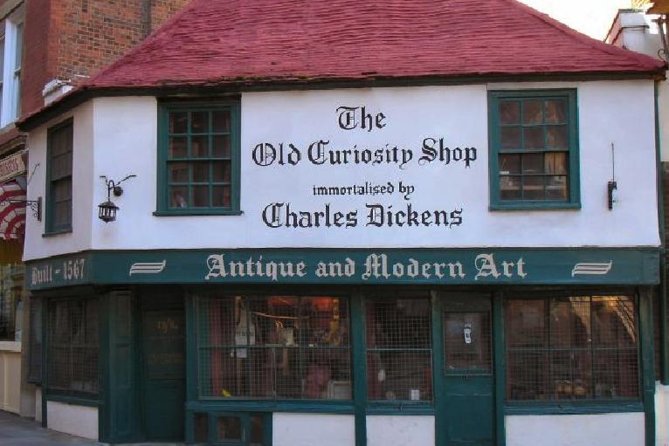 This walking tour will take us to places that both inspired Charles Dickens the writer but also those real locations that shaped Dickens the man.  All writers take inspiration from the people they meet and places they visit, and Charles Dickens was no different.  His novels are so successful because he so enjoyed wandering the streets of London and picking up the rich details of everyday life.

See locations relating to Little Dorrit and visit where Dickens family were imprisoned.

The site of the old debtors prison that so influenced the young Charles Dickens.

These beautiful and largely unvisited gardens were created by a contemporary pf Charles Dickens and in her own way equally famous social reformer in what was one of the worst streets in London and close to where Dickens lived as a boy.

Stand on Nancys Steps where poor Nancy met her end

Visit sites of poverty that inspired Dickens to write. See the places where the pick-pockets operated in Oliver Twist and much more

We will pass by this famous theatre and learn about the history and locations nearby.

The oldest court in the western world in effect is next to the notorious old Newgate Prison and site of public executions to Victorians in fact and fiction.

Learn about Winchester Geese and the lives of the poor and forgotten as we follow in the footsteps of how Dickens would walk to work.

As well as seeing the outside of this very famous church we will visit the legal districts where characters such as Pip would feature. Please note sometimes at weekends, access to this area is closed to the public.

Visit the outside of the actual Old Curiousity Shop, perhaps the oldest shop in London and right next to what was then a place of terrible poverty.

The most famous newspaper street in the world which amongst other things not only played an important role in the life of Charles Dickens but the alleys and taverns also feature in his literature.

See some of the pubs that Dickens himself drank in and where characters visited in the novels.

We visit other literary places along the way, including the outside of the home of the man who wrote the Dictionary.

Visit the alleyway where poor Krook spontaneously combusted infront of his shop.

Pass through parts of Bloomsbury and see where Charles Dickens lived after he had become successful and enjoy the sumptuous streets of this literary hotspot.

We finish the tour at the front door of the Charles Dickens Museum, his perfectly preserved house which you'll no doubt want to explore and perhaps have a well deserved cup of tea in the delightful restaurant at the back.

Borough High St, London SE1 1JX, UK
Traveler pickup is offered
We can meet you at your Central London Hotel (not just those listed above), otherwise just outside Borough High Street Tube Station where the tour commences.

star star star star star
This tour was amazing! Kevin, our guide, shared his encyclopedic knowledge not only of Dickens locations but of London in general. Every corner and alley, he offered a new, fascinating nugget of information. We loved the fact that, as a tour for just the two of us, we could move at our own pace and ask questions without the worry of slowing down a group tour. I will definitely book with this tour company if I visit London again.

star star star star star
This walking tour is equal parts Dickens and London. I had an exceptional experience with Kevin. What better way to learn about the city than through the eyes of one of it's most famous inhabitants. I believe that you would not have to know much about Dickens to enjoy this tour. It encompassed so much more than I ever thought possible. I lived in London for a time and am quite familiar with all things Dickens yet I learned/experienced/observed so much more! Kevin was so knowledgeable about London, about history, about the origins of expressions and about Dickens. The perfectly paced tour covered so much, I’m still soaking it all in weeks later.

star star star star star
Stephen Liddell came highly recommended to us by our good friends but he was not available during our visit. However, he connected us with his colleague, Kevin Pearman and Kevin proved to be a wonderful guide. He was neat and organized and met us at our accommodations in Covent Garden promptly at the agreed time. Having assessed our desires after a conversation the previous day, Kevin led off and we quickly began cutting through alleys and small walks, showing us the London of various ages from medieval to modern ( as in; "here is the Roman wall" and, "here is where Boy George got his start as a table busser"). My daughters (mid-twenties) and myself (mid-sixties) found Kevin's knowledge and delivery fascinating! He hails from London's Docklands in the east end and is a legit Cockney so he knows his way about the city having run many of its streets as a youth. He is also very professional, having worked his way up through the ranks of England's printers and publishing houses. His enthusiasm for history, especially its quirkier aspects is really fun and informative. Be prepared to walk! We were on the move on both sides of the Thames for about 5 hours. This was absolutely our choice and he was very attentive to our needs and wants but I warn you, you will not out-walk Kevin! You will however thoroughly enjoy his tour

star star star star star
Stephen did a fantastic job telling us all about Dickens and the world he lived in, plus lots of other interesting facts about London along the way. I highly recommend!

I booked this tour for my daughter, a huge Dickens fan. What a delight it was! Our guide was Stephen and he was great. Very knowledgeable and funny. He took us places few tourists will see. Down back alleyways, entering into a hidden garden. A hidden cemetery. We lucked out and had a private tour - just my daughter and me and Stephen and Richard who was shadowing him. They both took time to take our pictures and slowed down for me numerous times. While the tour seems long, at three hours, it actually went by pretty quick. The tour ends at the Charles Dickens House, which was perfect. You really don't want to miss this tour. One of the highlights of our London visit.