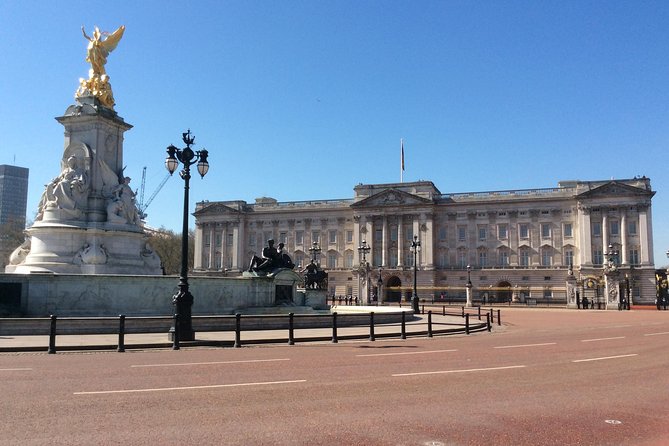 Discover top attractions and famous landmarks across the British capital on this private 3-hour London walking tour. Follow a private guide through the ancient streets of London and gain insight into centuries of British history. Along the way, hear the chimes of Big Ben and take in key sites of interest such as Covent Garden, China Town, and Trafalgar Square. Soak up the atmosphere in Piccadilly Circus and see the royal soldiers at Buckingham Palace. This private tour includes pickup and drop-off at selected London hotels.

Additional 2 hours Touring 10:00
Everything in the standard tour plus we will then get the Tube a few miles across London to visit St. Pauls Cathedral, The Millenium Bridge, Shakespeare's Globe Theatre, Tower Bridge+Tower of London!

INR 17,170
p.p. onwards
Itinerary
This is a typical itinerary for this product

Behind Parliament is the River Thames and you'll learn a little of the life it has played in shaping London.

We won't go on it but we'll see it from the river.

The Mother of Parliaments. Once a royal palace, it has inspired democratic movements in the France, the USA and around the world. We'll learn of its history and the role it still plays today.

Parliament Square the the political heart of Westminster. Full of statues of people dedicated to Democracy and Liberty from Winston Churchill to Abraham Lincoln to Nelson Mandela. Surrounded by Parliament, Westminster Abbey and the High Courts.

The broad avenue in Westminster full of beautiful and famous London government buildings.

Our national memorial to the fallen of WW1, WW2 and recent wars.

The home of the Prime Minister at Number 10.

The primary ceremonial parade ground is surrounded by beautiful buildings and parks. It must be why the Queen has her birthday celebrations here.

Beautiful Westminster Abbey is where every monarch has been crowned since the times of William the Conqueror almost 1,000 years ago.

The beautiful old headquarters to the Royal Navy.

The most famous square in London. Home of fountains, statues, galleries and culture.

Overlooking the fountains and large plaza, The National Gallery is full of paintings on the inside and street performers and art on the outside.

This beautiful old street is full of niche art and cultural shops and the inspiration for Diagon Alley in Harry Potter.

The cultural heart of London with a unique vibe. From Opera to sword jugglers, this is the place to be.

The beating heart of the West End. Surrounded by cafes and movie-cinemas.

Learn the story of the women who died during the epic war effort.

New York has Time Square, London has the much older Piccadilly Circus.

One of many high quality retailers in Piccadilly and one where everyone from The Queen downwards buys their goodies from!

One of the Royal Parks. It is called Green Park for a particular reason!

From Green Park, we will see the London family home of the Spencer family.

The primary Ceremonial road in London. You might recognise it from Royal Weddings and national celebrations.

Buckingham Palace, the home of The Queen.

Chinatown in Soho is a unique mix of old London, Chinese heritage and contemporary culture.

An ornately beautiful Royal Park with great views of the palace and Westminster. Sometimes used in TV shows such as Downton Abbey.

On the extended tour, we will see the cathedral for London and learn its fascinating history.

The largest modern art gallery in the world. (Extended Tour)

Londons most famous food market, here since Roman times. You can get food from all over the world here... freshly made. Many a tour has come to a halt here :-) I like the dairy free goat ice-cream and also the Ethiopian curry but everyone has their favourites! (Extended Tour)

One of the smaller and less famous London cathedrals but beautiful nonetheless. (Extended Tour)

The original bridge was built by the Romans and pulled down by the Vikings. A millennia later and this modern bridge still has a tall spike on the end with a gory story to tell. (Extended Tour)

Learn the story behind the famous Globe theatre and all things Shakespeare! (Extended Tour)

From London Bridge we will see this old Royal Navy Cruiser. (Extended Tour)

From out of nowhere, the epic Monument to the Great Fire of London appears. (Extended Tour)

Built by William The Conqueror and home to the Crown Jewels and with an active military history up past WW2. We will visit the ominously named Traitors Gate. (Extended Tour)

We finish by one of the symbols of London, Tower Bridge and learn a little of its interesting history along the way. (Extended Tour)

This is just one of over 50 tours run and organised by Ye Olde England Tours. Believe it or not the list of places we visit in this tour is not exhaustive. This is the tour for you for your first or only day in London.

Westminster, London SW1A 2JR, UK
Traveler pickup is offered
We can pick you up from any Central London hotel, not just those listed here.

star star star star star
Steve was amazing!!! Full of fun facts and interesting stories. We really enjoyed the pace of the tour and how many hidden treasures he showed us. We have travelled Extensively and have done many tours, by far this was the best. Worth every penny! Can’t wait to have The privilege of another tour with Steve.

star star star star star
I would recommend this tour to everyone visiting London! the tour guide was extremely knowledgable and never felt by any means boring. He catered directly to our liking and seemed to know everything about the city. We were extremely impressed by all the various opportunities he made us aware of! I wish we had another day in the city to explore all the options. I loved how the guide was always informing us about information and history of the city, I feel like our family had never learned more about any place we have visited! I would recommend to anyone visiting to definitely go with full energy, and be willing to follow the lead of the guide, I was astounded by the quantity of things I had never known before, yet perfectly catered to what we wished to see.

star star star star star
This was a fantastic tour and Simon a very knowledgable tour guide. Although we had been there for a few days before our tour and walked by some sights, Simon answered all the questions we had and added points and facts we would not have know about (with lots of humour). The tour covered a lot and probably one of the best things we did.

star star star star star
Kevin was absolutely wonderful Not only was he so informative on the facts but he told me so So many wonderful stories I am still telling my husband all Of them ❤️❤️❤️❤️ We spent almost four hours together and it was honestly the most enjoyable way to start my trip in London! Just wonderful! Ask for kevin!

star star star star star
We had a great time on our walking tour of London. We saw Parliament, Buckingham Palace, Trafalgar Square, Westminster Abbey, and even the changing of the horse guards where one member of our party got some extra attention from one of the horses! Stephen was very knowledgeable and told us a great deal about the things we were seeing. He met us at our hotel and led us everywhere we needed to go saving a lot of time and planning on our part. The day before we had another company cancel our tour we had scheduled with them which led to us doing some unplanned wandering and seeing things such as St. James Park which had originally been scheduled for this tour. Stephen was great about being flexible and adjusting on the fly to show us things we hadn’t seen yet. This made for a great day and I recommend doing it early in your stay to get a feel for the city.

star star star star star
Stephen, He was early for the walk and very knowledgeable. He was so friendly and we learned a lot about England. It was one of the best tours we have ever taken. I highly recommend him for a tour of london. Found out he does several different kinds of tours so there are so many to choose from. He has written several books on history of England and was one of the first private tour operators in England. We had so much fun walking the streets of london and learning about all the little ins and outs of london.

star star star star star
Simon really made our tour special. He showed us everything we asked for and even more. He was considerate of our time constraints and got us exactly where we needed to be on time. He kept the pace quick but also was very patient with us taking pictures, asking questions, etc. 1000% would recommend if you’d like an insider view of London!

star star star star star
Kevin was a great tour guide! He’s a local that grew up in London. He tailored our tour to our interests and was enthusiastic about sharing his knowledge with us. He had tons of little funny trivia information that you would never learn from a book or online. He also gave us great recommendations on where to eat and visit after the tour. I highly recommend this tour to get accumulated to London.

star star star star star
Our guide, Kevin, was extremely knowledgeable of everything he showed us but also of random questions we asked of him. We viewed popular places and hidden gems! We also got to see to see a royal leaving St James Palace! Everything was quite brilliant really!

star star star star star
Stephen was a wonderful tour guide. He showed us so many sites in London in a very short period of time. Stephen had so many stories that were interesting and humorous. Would highly recommend his tours. Could not have had a better experience!
Previous Next
keyboard_arrow_up