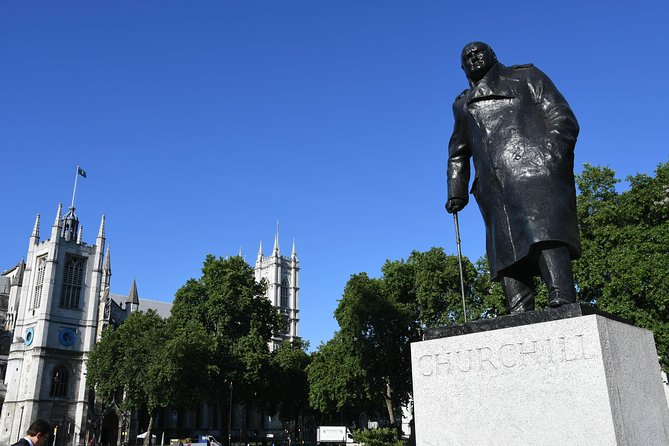 After the walking tour : Visit the Churchill War Rooms

Discover the secrets of the Second World War in the underground nerve centre where Churchill and his war cabinet lived and worked.

Sights you will see include ;

Changing of the Guard (Daily during the summer months)

INR 4,811
p.p. onwards
Itinerary
This is a typical itinerary for this product

Spend as long as you want in the War Rooms

star star star star star
We were there a few days after the Queen's passing, and almost cancelled but were reassured that the tour would be fine, and it was way beyond that! Will made sure that we were in the right spot at the right time to see various changing of the guard, motorcades (the new King!), and other unusual activities, as well as giving us the complete tour. It was fabulous. And the War rooms were very interesting.

star star star star star
Our tour with Christophe was enjoyable with many interesting historical facts along with light humor. In that it was the Tuesday before the Queen's funeral, the area was tricky to navigate yet Christopher was adept at negotiating the ever-changing situation. Highly recommend

star star star star star
Christopher was fabulous—knowledgeable, friendly, terrific sense of humor. Bring water. Fun getting to meet fellow tourists. Initial meet up near Ritz Hotel was a bit chaotic but everything got sorted eventually.

star star star star star
Tim was a great tour guide: funny, articulate, knowledgeable and personable. He navigated through downpours well, too! The walking tour was well-choreographed and my sister in law LOVED the Warm Room self-guided tour, as she is a history fan. Highly recommend as you can have fun AND learn in a couple of hours!

star star star star star
This was one of the true highlights to our London vacation. Chris was our guide and he made history come alive with his interesting stories and insights. Through out the remainder of our time in London we often referred to “what Chris said”. He was great and made this tour exceptional. The Coles

star star star star star
Cliff was very informative and at the same time amusing. Just what we were looking for on our first visit to London. He kept the pace going so everyone could manage well. Gave some other insights and recommendations as well!

star star star star star
We had a great experience on this tour with our guide Christopher. He did a great job keeping us together when things got busy, such as near the changing of the guard. Christopher has a ton of fun facts about London and delivers them with a great sense of humor. I would highly recommend this tour for first-time London visitors.

star star star star star
Amazing 3 hour walking tour covering the popular spots in London. Our guide Connor was knowledgeable, entertaining and helpful. We had a good balance of walking, exploring, photo ops and breaks. I would highly recommend this tour to friends and family to start your London vacation.
Previous Next
keyboard_arrow_up