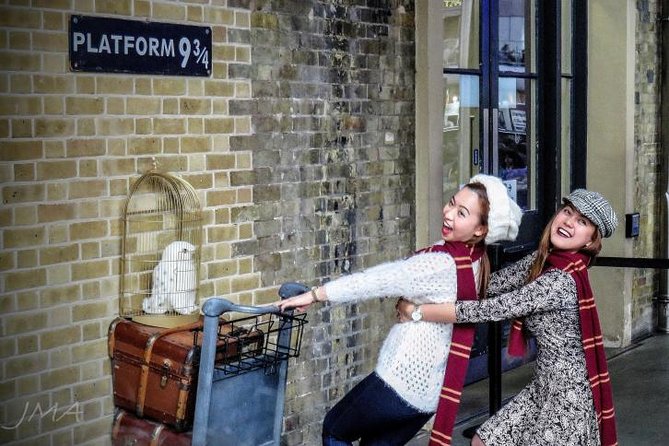 This walking tour of London unfurls the movie set locations of the world's most famous Wizard (you know who he is!) Great day out for the family

You will see over 10 movie set locations and several locations that inspired JK Rowling. We will visit actual filming locations in London!

The tour starts at King Cross Train station : for a special photo stop at platform 9 3/4.

After visiting this incredible area we head to London Bridge where we see more film locations. These include the Millennium (aka Wobbly) Bridge and the Leaky Cauldron. In addition to the film locations we will see sights and buildings that inspired JK Roling when she was writing each of the books.

INR 5,507
p.p. onwards
Itinerary
This is a typical itinerary for this product

star star star star star
This tour was overall a great experience! Our guide (I believe his name was Chris?) did an excellent job detailing the parts of the tour with the movie and was amazingly friendly. Would love to do the tour again!

star star star star star
Our guide, Freya, was incredibly engaging! She captivated my 10-year-old daughter (a big Harry Potter fan) and my seven-year-old son (who typically has a short attention span) as well as my husband and me. The private tour was well designed, interactive and comprehensive. What a perfect way to start our vacation in London. We all learned so much. The time flew by! I would highly recommend this tour for adults and families with kids.

star star star star star
She informed us. She really knew her stuff and made the tour so much fun. She was so sweet and took pictures for us. She seemed to really enjoy her job.

star star star star star
I'm a big harry Potter fan but it's very pricey in my opinion, I'd lower the price. But worth going and plenty eatery's and coffee ☕ shops to have food in.

star star star star star
This was not only a wonderful way to need out to Harry Potter facts and places, but to experience London period! I can't recommend it enough. Ask for Julie Ann. She was wonderful.

star star star star star
The private tour with Brian was absolutely amazing. He was friendly and really Nice. We thought we would Just get some information and visit some Harry Potter places here in London, but we got alot of information about London in general aswell. We are very happy with it.

star star star star star
This tour was a fun way to see different parts of London. It was neat to be able to see where JK Rowling got her inspiration and where parts of the movies were filmed. Our guide Julie Ann was great her knowledge and love for Harry Potter made our tour fun!