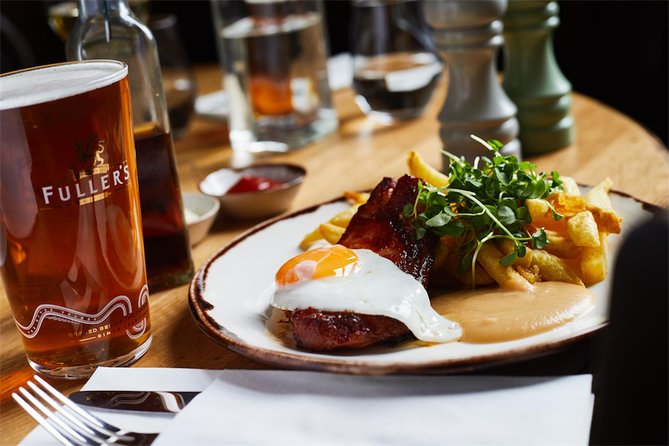 We will stop for an hour and taste the best of British foods in one of London's best food markets: Borough market.

Foods you will try include: Scotch Egg, Fish & Chips and lots of other British foods.

At the start, we will head through Green Park to Buckingham Palace, where we'll watch the world-famous Changing of the Guard ceremony (if it is on). We then head to Westminster. Sights we'll see include Parliament Square, Westminster Abbey, & the Houses of Parliament.

We then go to the London Bridge area, where we'll see Shakespeare’s Globe, the Shard, HMS Belfast, Tower Bridge & the Tower of London.

You'll be hungry and thirsty (hopefully) at this point: we then go for a feast of the best of British foods.

INR 5,380
p.p. onwards
Itinerary
This is a typical itinerary for this product

Best food market in the world

star star star
Our tour guide was absolutely wonderful, but she took me on a different tour than I booked. When we started off, there was a question that should have set the warning bells off, “Are you on the 3, 5 or 6 hour tour?” I should have wondered why they were cramming so many people on my tour that was specified as a small group tour. The first problem was the nearly sprinting speed we flew around London, I was thankful my daughter with a bad knee had to stay home. The second problem was I was hungry! All the reviews I read said don’t eat before you go, so I found myself running through London and starving. Not a great combination and we didn’t even stop for coffee or tea, so I was undercaffeinated. Regardless, our guide was very knowledgeable and extremely funny and answered all the questions easily. The only problem I had was the fact that she didn’t take me on a food tour. We rushed everywhere to see all the sites, but when we FINALLY got to the market to try out the London food varieties, it was closing. I was given a box of fish and chips with no tartar sauce and then she disappeared to only return with a “Goody Bag” filled with 7 items from the market. Some were ridiculously silly prepackaged items you get in the grocery store and others needed to be refrigerated, a fact I should have been told before I left it sitting out overnight. But honestly, who would think they would shove a pork ball into a paper bag with no instructions?! There was no description of the food items or explanation of their relevance to the area, nothing like any food tour I’ve ever been on. Honestly, I waited a few weeks to post this until I calmed down. I should have asked for a full refund at the time, but the tour I went on was lovely, other than the breakneck speeds….it just wasn’t the tour I booked and paid for.

star star star star
Our guide Tim was the best ever. Great sense of humor, excellent knowledge of history, and lots of inside info on the lives of the Royals! Best tour to get the most out of London in a short time.

star star star star
Tim was my guide and he was great! Appreciated the knowledge be gave and the walking was manageable as we did it in stages. It is still a fair amount. For food I had to leave early but he gave a great recommendation for fish and chips as well as the bear doughnuts ever. Worth it to do an activity to popular areas -- gives you a taste for many locations.

star star star star star
This tour was amazing. You get to see a little bit of everything in London so you know what you want to do later in more detail. Chris, our guide, is very knowledgeable of the history. The food tasting happens towards the end of the tour so don’t go hungry. You get to eat many UK traditional food. You will not leave hungry. I highly recommend this tour. You should know that it is a lot of walking. You cover a lot of London.

star star star star star
My partner and I selected this tour hoping to have a good time and learn a little more about London and try some quintessential British food. We were beyond thrilled with our experience! Our guide Chris was amazing and funny! He was super knowledgeable about the sites he showed us, and he even threw in some Harry Potter references! I would recommend this tour without hesitation!

star star star star star
In our European trip we took several tours and this one was by far the best! Our guide, Chris, was informative and funny, showing and teaching us volumes more about London then we expected! We recommend this tour for anyone who’s visiting London for the 1st time.

star star star star star
Andrew was funny and informative. We learned a lot about London sites and history and tried some very good local food. Done at a good pace and now we know which places we want to revisit in more detail.