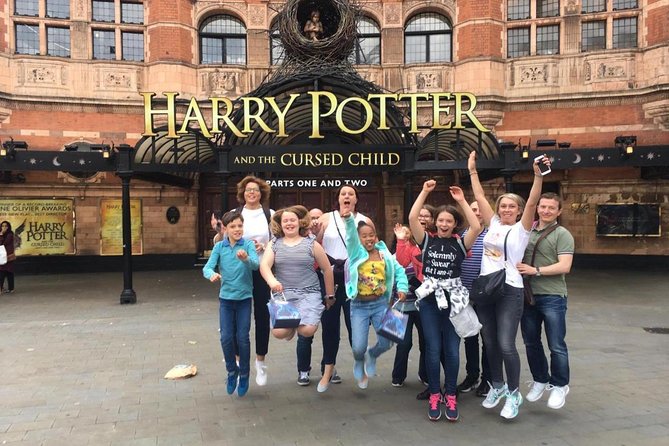 You will see the famous movie set locations and several locations that inspired JK Rowling. We will visit the actual filming locations in London!

We then head to Leicester square area to see some of the film locations & visit 2 famous shops. The first: inspired & made all of the paper props for the films and the second a very nice treat for the kids (We keep this one a secret!)

We then go to the London Bridge where we see more film locations. These include the Millennium (aka Wobbly) Bridge & the Leaky Cauldron. We will also see sights & buildings that inspired JK Rowling when she wrote each of the books

And finish off on a Thames Cruise: where you can some of the Potter filming locations from the River Thames!

INR 5,438
p.p. onwards
Itinerary
This is a typical itinerary for this product

star star star star star
We had a great time and especially loved our tour guide, Tom!! He was so kind and helpful, made us laugh and had lots of great knowledge to share!!

star star star star star
James was our tour guide and he was great! Very pleasant person with knowledge and we really enjoyed the three hour tour! I highly recommend this tour to everyone with any age group!

star star star star star
The tour was very interesting, as well as showing/ explaining Harry Potter shooting locations, we got tour on the most amazing streets and magical part of London that not more people are aware of. Very impressive.

star star star star star
A booking was mistakenly made through Groupon, where through their policy you are unable to cancel. I was provided the the number to speak directly, and I was provided a refund within minutes. Great customer services, and I'll definitely be keeping an eye out for tours in the future. Thanks once again.

star star star star star
The tour was amazing! Many interesting informations dir harry potter fans!!.. the guide was very kind!... I will do the tour a second time !

star star star star star
Sara, our guide was the best !!!! She was very enthusiastic vey kind and helpful too!!! Because I had my kid with me she was waiting us because we were slow. We had an accident with some candies and she helped us to pick up them from the road. She was the best. Thanks for the grate tour. It was the reason that we Visit London and it was worth it!!!

star
Absolutely appalling to have traveled for 3 hours for this tour and be told BY EMAIL an hour before that it had been CANCELLED, NO response from the tour guide or trip advisor company !! Two very unhappy children.

star star star star star
This was a fantastic experience! Our guide, Julianne, was incredibly knowledgeable and did a great job navigating us around London. We enjoyed getting to see locations from both the films and areas that inspired J.K. Rowling while writing the books. Julianne also included some London/British history as well which was great because we really felt like we saw the sights! One of our favorite parts of our London trip.
Previous Next
keyboard_arrow_up