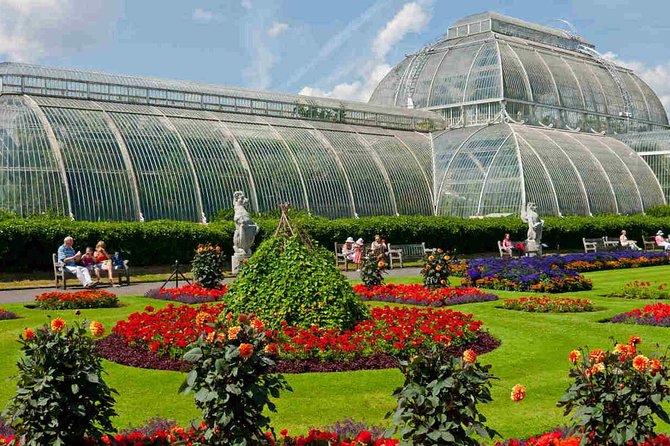 Our tour guides will guide you on an exploration of London’s major 30+ landmarks. Buckingham Palace. Westminster Abbey & The Tower of London to name a few !

After the walking tour you will then head to Kew Gardens. World-leading botanic gardens and discover the amazing science and conservation work.

We will head through Green Park to Buckingham Palace, where we'll watch the world-famous Changing of the Guard ceremony. After witnessing this impressive, traditional ritual, where the New Guard exchanges duties with the Old Guard, we'll head to Westminster.

INR 5,090
p.p. onwards
Itinerary
This is a typical itinerary for this product

The Monument to the Great Fire

star star
Overpriced and most of the attractions were closed during December. Also they kicked everyone out at 3pm before we could even see any Christmas lights. So if you're planning on going there in December you'll just end up seeing dead plants and get kicked out early. On the plus side we did see some geese and at least the greenhouse areas were open. But not worth the price. Oh and the cafe was expensive. They have a single piece of fruit (apple or banana) for £1.50. A gluten free muffin for 5 quid and various other atrociously priced snacks. There was one good canteen there which had freshly made pizza for about a tenner. It was decent but not the best. If you want to eat there I recommend going to the larger canteen not the cafe. In short, it was an "ok" day out but a rip off. I wouldn't bother going again.

star star star star star
Brilliant, we have peaceful walking around the gardens weather is really cold but worth to visit them we have leaving early due Christmas light

star star star star star
Visited gardens for the first time and started with a one hour tour. Our guide was Peta and she gave just the right information to go on and visit the areas of particular interest.

star star star star star
A healing place for anyone. Great plant species, quite, creative zones with music, friendly birds and lovely sounds. We will come back for events. Definitely a place when you can reflect even by your own or enjoy with friends, family.

star star star star star
Couldn’t find a page just for Kew Gardens and felt this was the closest to it. We wanted to let everyone know how great this place was. Plenty to do for families, couples and children. Such a large space for plenty of walking and sight seeing with lots of attractions to visit. Be prepared to queue for the Palm & Temperate House but will be worth it as you will be in awe of the variety of plant species. Top tip - try the amazing ice cream stand located by the pavilion restaurant (you will not regret this) and if your a ‘Blue Light Card Holder’ you can get free entry and only £10 extra to bring a guest. Enjoy!