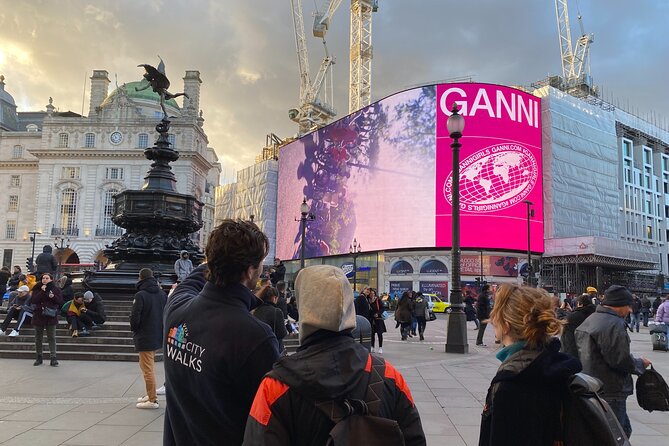 Explore London as it comes alive during the evening, on this entertaining 1-hour walking tour!

Your guide will introduce you to London's vibrant nightlife, showing you some of the capital's most-loved landmarks at the same time. Before you stroll along the River Thames towards the iconic London Eye, enjoy hearing about the famous sights in Parliament Square, including Big Ben and the Houses of Parliament!

As you continue along Southbank, you'll spot countless bars and eateries boasting panoramic waterfront views. Leave your tour for a bite to eat, or cross Waterloo Bridge as the tour takes you towards Piccadilly Circus. Here, you'll be amazed by the treasured National Gallery, and one of London's most bustling squares.

This tour is the perfect way to introduce you to London's best evening spots!

INR 906
p.p. onwards
Itinerary
This is a typical itinerary for this product

Discover hidden facts about this iconic landmark – why does it sometimes glow green at night?!

Visit the world-famous headquarters of the Metropolitan Police Force and see the eternal flame that burns bright beside it.

This monument commemorating the famous WW2 battle is specifically designed for the public to interact with. Your guide will tell you all about the history of this piece of artwork sculpted from metal.

This is a luxurious 5-star hotel with an interesting history... learn which famous spies are associated with this impressive building.

Discover the history of the most famous square in London, find where the true centre of London is and marvel at Nelson’s Column.

See the world-famous advertising screens that tower above you and learn who has held a coveted spot on these screens since the 80’s.

Tread the same pavement as world famous actors and see where the most important film premieres happen. Hear about this square which is at the heart of British culture and entertainment.

Visit this architectural jewel nestled in the corner of one of the most famous squares in London.

This is the most important railway station in London. Learn about its history and the famous Victorian monument that stands at its front.

Travel along the strand, full of glimmering theatres and once the beach and bank of the River Thames!

This is the most famous hotel in the world, the birthplace of room service. See the only street in the UK where cars can drive on the right-hand side!

Once a Royal Palace, this building is home to one of the most beautiful courtyards in Europe and has had many different uses over the years...

Stroll over Waterloo Bridge at sunset and take in the best view in London.

See the most famous theatre in the world and hear how it acquired its royal seal!

Stroll along the bustling Southbank at dusk and visit the largest Ferris wheel in Europe.

star star star star star
This tour was excellent and was in a small group. It was a through introduction to the major sights in London. Hannah was a wonderful guide and a great source of interesting facts and knowledge. It was much better than a cycling tour I did with a different company, which was way too rushed. I'd highly recommend this tour!
Previous Next
keyboard_arrow_up