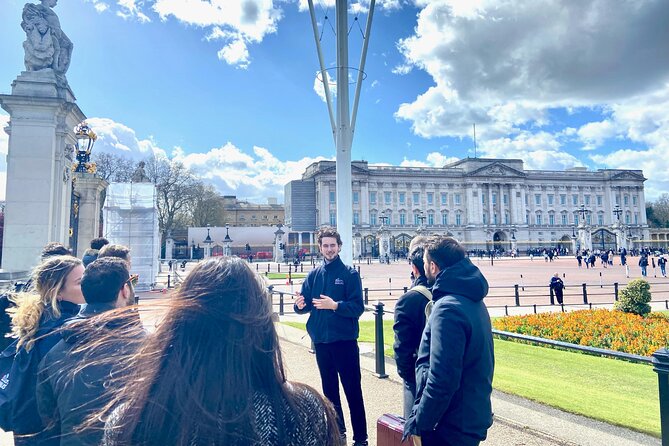 As you leave Parliament Square, your guide will introduce you to the whimsical Westminster Abbey. Admire it's striking facade and enjoy hearing about the iconic royal weddings and coronations that have taken place here. The tour continues along St James Park, London's oldest royal park, to the amazing Buckingham Palace. Have your camera at the ready as you stand outside the world's most treasured royal residence!

From here, sing and dance your way through the West End! You will pass some of London's oldest venues, including the Piccadilly, Sondheim and Apollo, that have been home to some of the world's most popular theatre shows. The bustling West End is known for it's dining and nightlife scene, so remember to ask your tour guide for some recommendations!

INR 906
p.p. onwards
Itinerary
This is a typical itinerary for this product

Hear all about the history of this majestic clock tower & learn how the bell was irreparably damaged just months into operation.

The centre of political life in the UK, this palace was once home to Britain’s Monarch.

Marvel at the bronze statue of Winston Chruchill, one of 12 statues of iconic political figures that line the square.

Visit the highest and most prestigious court in the land

This Abbey is the finest gothic cathedral in the UK. Marvel at the architecture and hear tales of the wonders that lie within.

Wander down the most exclusive street in Westminster and hear all about the intriguing “Chairmen” who once waited there...

These winding steps once led to the largest cockfighting pit in London!

Pop in to Buckingham Palace and see where the Royals reside! Hear all about the history of the Palace and wonder at the Royal Flamingos that used live in the gardens... If you’re lucky you might even witness the famous Changing of the Guard!

Gaze at the beautiful royal park and find out what King Henry the 8th originally used it for...

Visit the lesser-known Royal Palace just around the corner from Buckingham Palace...

Wander up the most regal street in London and see all of the illustrious shops that supply the Royal Family directly and hold Royal Warants.

This fascinating building was the first ever ‘shopping mall’ and is guarded by the oldest police force in the UK.

Take in the wonderful Regent Street, the most famous shopping street in the world, named after the Prince Regent.

Glimpse the most bustling and vibrant street in London’s West End, home to theatres, jazz bars and restaurants galore! Get top tips telling you were to visit from your friendly local guide...

Explore what was the oldest market in London.

Hear about the famous bunkers hidden underneath the most central part of London.

star star star star star
Booked this tour after having done the Wizard Walk with the same company the day before. Once again it was a top notch tour and really interesting. Lew was a great guide and a nice bloke as well. Loved getting a bit more history on the houses of parliament and Buckingham Palace.

star star star star star
Hidden gem in London! Met my guide in parliament square at 11. The tour was wonderful we even saw the changing of the guard! Very personable and lovely host. Thank you!
Previous Next
keyboard_arrow_up