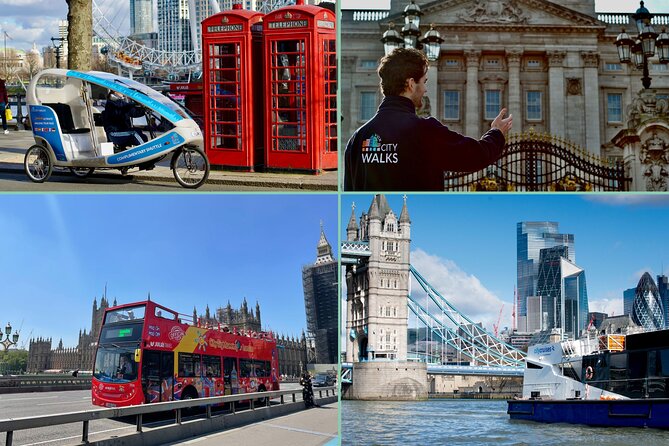 Join a walking tour and be introduced to the iconic UK capital by your friendly guide. With three walking tours to enjoy, you will stroll past the greatest sights in London, including Trafalgar Square, Big Ben and Buckingham Palace, all the whilst enjoying captivating commentary!

Hop on-board an iconic double-decker bus and enjoy panoramic views from the open-top deck, as you pass by the London Eye, The Shard, St Paul's Cathedral and plenty of other hotspots! Continue enjoying sensational views as you board your one-way River Thames sightseeing cruise, taking you past the Tate Modern and Tower of London!

As if this wasn't enough, your pass includes complimentary access to an eco-friendly Veluba shuttle (e-tricycle) and a sightseeing app with 9 self-guided walking tours and more!

INR 4,752
p.p. onwards
Itinerary
This is a typical itinerary for this product

Did you know Big Ben isn't the iconic clock towers real name? Listen as your guide tells you why!

The Abbey is iconic for the countless royal coronations, weddings and burials that have taken place over the years

Admire the official residence of Her Majesty The Queen

The palace originally served as a residence for Henry VIII, making it one of London's oldest royal palaces

Hear why singing and whistling is banned in the arcade!

Located on the bustling Shaftesbury Avenue, the Apollo is home to the Wicked musical!

Surrounded by bright billboards and the hustle-and-bustle of central London, you'll truly feel like you're at the heart of the capital!

Iconic for being one of London's most vibrant yet historic squares

Admire the spectacular National Gallery that is home to over 2,300 paintings (Entry ticket not included)

See the UK's most talked about political residence

Did you know, this striking 5-star hotel used to be the Secret Service's HQ?

At the heart of the West End, Soho is lined with vibrant bars, hip restaurants and a buzzing nightlife

This vibrant square has a fascinating history, including how it's been the home to famous faces such as Karl Marx and the Prince of Wales

Did you know, The Strand was much closer to the Thames before the construction of the Victoria Embankment?

Marvel at the world's most famous bridge

Learn how Cleopatra's Needle in London is one of three Ancient Egyptian obelisks - the other two are in Paris and New York!

The perfect day out for all the family as you discover penguins, sea turtles, sharks and so much more! (Entry ticket not included)

Take your child to meet the real life Shrek! (Entry ticket not included)

Madame Tussauds' first ever location was on Marylebone Road in 1884 - making it extra special if you ask us!

On your river cruise, enjoy panoramic views of the River Thames and surrounding landmarks including Tate Modern, The Shard and the Tower of London!

star star star star star
Lew was wonderful! Knowledgeable and fun to be with. Showed us landmarks and hidden lessor known landmarks. Great introduction to London. I highly recommend.

star star star star star
Did you know that a Roman Amphitheater was discovered when excavation was under was for Guildhall Art Center. Well, Nick knew and that is just one of the unique places that he took us too . He is friendly, informative and Fun! .

star star star star star
I loved every part of our tour. Hanna was very knowledgeable, and fun. We took all three tours that day and each one was fun and unique.

star star star star star
We did all 3 walking tours in one day. Great tours and great content. Hannah was our tour guide for all 3 and we definitely hit the jackpot with her!! I recommend these tours to anyone visiting. Hannah shared so much info with us that helped us get familiar with the area. I am SO thankful I decided to sign up for these tours. Otherwise, we would be staring at our phone, trying to navigate and we wouldn’t have seen half of what she showed us! Great tours and I highly recommend!

star star star star star
Really loved this, what better way to see London, on a bus, a boat and on foot! Just a really lovely combo. We pretty much did it all in a day but you dont have. Must just mention the guides we had on the walking tours Hannah and Lew! They were brilliant!

star star star star star
Amazing experience! My girlfriend and I we really enjoyed this new concept of guided tour. After 45mins we could jump off to have a quick break and then we jump on to finish our tour. Both guides were fantastic! - I recommend it!

star star star star star
It was a fantastic experience enjoying both the comfort of a hop-on hop-off bus through London, then strolling on foot with super audio explanations having lunch and.finally a great Cruise on the Thames. All in one.

star star star star star
This is such a fantastic pass if you're looking to go sightseeing across the whole of London. We visited the capital last weekend, and after not visiting London for years, it was great to see all of the best parts of the city from a bus, boat AND walking tour. I'd highly recommend this pass, especially for first timers, or if you haven't been for a while. Great value for money too.

star star star star star
After so many months locked in, I decided to take the family to do something different. We all enjoyed it and got the opportunity to see London at our own pace.
Previous Next
keyboard_arrow_up