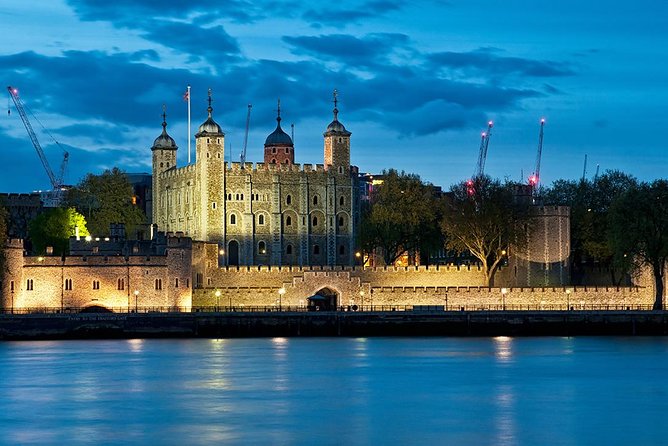 As we retrace the trail of the notorious Jack the Ripper murders, you will learn about the plague pits, the Bloody Tower, Traitor’s Gate and several notoriously haunted areas of the East End of London. Discover how traitors and criminals were punished, why the Ripper was never caught and what life was really like for people living and dying here. This walking tour lasts around 2.5 hours.

Tour in English 18:30
2-hour walking tour with an English-speaking guide.

Tour in Spanish 18:30
2-hour walking tour with a Spanish-speaking guide.

INR 1,576
p.p. onwards
Itinerary
This is a typical itinerary for this product

Meet your guide by the Sundial, outside Tower Hill Station.

This tour begins in the 1400’s – a time long before an official police force patrolled the shadowed alleys in the London's infamous East End.

Explore the Tower of London, believed to be the most haunted building in the City. Learn about the stories of those who where imprisoned and executed in the Tower.

As we retrace the trail of the notorious Jack the Ripper murders, we get a taste for a new breed of soul harvester born of the Victorian age, the world’s first psychiatric hospital, plague pits, the Bloody Tower and Traitor’s Gate and several notoriously haunted areas of the East End. You will also see the emblematic Spitafields Market and Brick Lane and will hear the stories of London's most haunted building - the Tower of London.

In a city so full of light and beauty, this walk will show us the darkness waiting behind every corner.

The London Grim Reaper Tour finishes at the Ten Bells pub next to Spitalfields Market.

star star star star star
My mom and (adult) me did many walking tours with Sandemans while in London. We loved them--they made our trip sooo pleasant and fun and engaging. We started off with the free tour with Luke, which was a great introduction to West London sites. We did the Old City tour with Ivo, who was an excellent and informative guide. (When we got lost on this tour because of our own dilly-dallying, Ivo even staged a miraculous reunification!). We visited Oxford with Peter, a former student himself who as able to give us all the insider tips. And the best tour by far was the Grim Reaper tour with Dave. Dave was an incredible guide/performer/historian. The tour was SO interesting and gripping. We would highly highly recommend taking ALL of these tours with ANY of these guides during your visit!!

star star star star star
Went on the Grim Reaper tour with Ali and it was wonderful! Though it was really cold that night, Ali kept our spirits up and made us motivated to follow her till the end. Very sweet, knowledgeable, funny and friendly guide. Learnt so much. She really sparked our curiosity to look into the Jack the Ripper casebook. Highly recommended!

star star star star star
Dave was the kind of guide we continued to rave about in the hours and days after the tour. Funny, educational, engaging and clearly adapting to the group, I learned more in those few hours than I had done in all my years of coming to London and doing the "tourist" thing around the same sites. As I have an interest in history I wasn't new to the Ripper story but throughout the tour it was brought to life (no pun or disrespect intended!) through the retelling and interaction with the locations around us. We were a mixed group of Brits and Americans and he took the time to talk to most of us individually as we moved between sites, always with a comment or a joke to help pass the waiting time as the lights were against us or to help ward off the February chill. Bonus points must be awarded for not making a comment about my sneezing fit at the plague pit. Pretty sure I don't have the plague, sorry for spreading it if I do. The fact that it was two and a half hours long seemed a lot at the time of booking but it flew by, the walking never felt like too much or too fast, and it didn't take up a huge amount of the tour (my tracker measure about 40 minutes of movement over 2.5km). Walking shoes, wrap up warm, and enjoy the tour of some of London's creepiest, chilling (figurative and literal in February), and infamous sites.

star star star star star
Our guide Dave's passion for the history of London inspired this not-to-be-missed walking tour, sprinkled with humor, storytelling, and just plain fun. He was full of recommendations of places to eat and other activities to enjoy, as well--his recommendation of Poppies in Spitalfields for the best fish and chips was spot-on! I would do this again when bringing someone new to London.

star star star star star
Decided to go on this tour while I was staying in London, and it was an amazing decision! Ivo did a fantastic job engaging with the group and answering peoples questions in a way that gave everyone something to walk away with. If you have the time, I can't reccomend this tour enough.

star star star star star
Dave was a fabulous guide his storytelling is exceptional and recall of facts and dates amazing! We all really enjoyed the tour even our 13 and 16 year old daughters! Thanks Dave!

star star star star star
It turned out that Ellie, our guide for the evening, is a walking-talking-living-breathing expert on Jack the Ripper and all things London..! What an absolute joy it was to spend a couple of hours in her enthusiastic company. A wholly recommended tour.

star star star star star
We took this walking tour on a recent trip to London. We had already gone on a ‘ghost’ tour on a previous trip and did worry it may be similar. However it wasn’t and it was absolutely fantastic. We did go on this tour with our two children (almost 10 year old and 12 year old) which may not appeal to everyone, but having done previous tours we knew they would enjoy this. The stories/facts told we not too gory for them. Our tour guide (I think she was called Ellie) was so knowledgable and interesting. When she was retelling stories you could tell she was passionate about what she was talking about rather than just reciting words/stories. We were all absolutely gripped and I could've listened to her all night. I am a big fan of history and it was nice to have a lot of interesting history in amongst more gruesome tales. I will be booking another tour when we return to London and would highly recommend this tour to others.

star star star star star
My friend’s and I have taken this tour every time we are in London and we love it! The experience changes from tour guide to tour guide which keeps it fresh every time we have taken it. Our last tour we took was with Dave, he was very knowledgeable and a great story teller. He was also very friendly (he offered to stay as long as he needed to if anyone had questions or needed directions AND he offered some water to a lady who had a bit of a cough at the end of the tour)! I would definitely take this tour again, especially with Dave as the guide!
Previous Next
keyboard_arrow_up