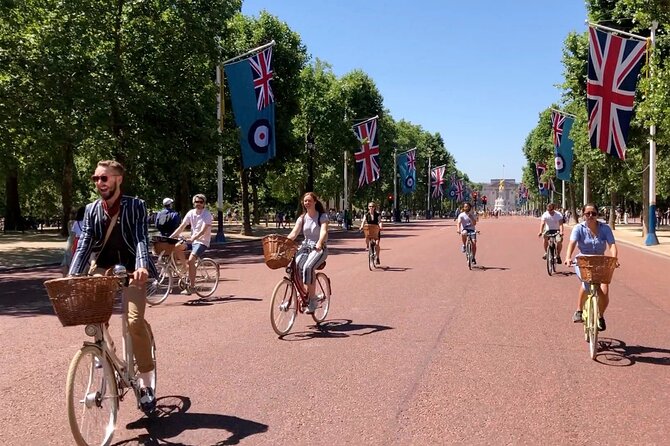 The London Landmarks Bike Tour is an award winning, bucket-list-ticking, small-group tour of Royal London & Westminster. Designed around a safe and easy-going cycling route, the Landmarks tour offers a half-day introduction to London’s top iconic locations, Royal Palaces and hidden gems.
You'll get an experience of London's history and modern culture. The tour combines just the right amount of fun facts, quirky stories and local insight. Riding a classic British bike is the perfect way to explore London and you'll also get the chance to stop for a beer at a quaint pub and try graffiti in a legal street art area.

INR 2,890
p.p. onwards
Itinerary
This is a typical itinerary for this product

Your tour will meet at the Walrus Pub (SE17RW) to use the facilities. Tally Ho guides will then bring you over to the bicycle storage location to get kitted up with a bike and helmet or tweed flat cap (optional). Secure bag storage is available.

Your ride starts with a loop of Archbishop's Park to get comfortable with your bike and to make any adjustments. The park is a popular spot for Lambeth residents and hosts a Zipwire in the summer months.

Lambeth Palace is home to the Archbishop of Canterbury and located on the south side of the River Thames, across from the Houses of Parliament.

You'll stop on the south side of the River Thames to see one of the best views of Big Ben and the Houses of Parliament.

Explore the quaint backstreets of Westminster, home to politicians, air raid shelters, and Lawrence of Arabia.

Pass through the ancient grounds of one of London's 'public schools' and find out what Winnie-the-Pooh and Shane Macgowan have in common.

Stand in the middle of Horseguards Parade where military parades take place each year and see the Downing Street garden and impressive Old Admiralty Building. You may also catch part of the Horseguards changeover.

Ride up the Mall to Buckingham Palace home of the Queen. Hear tales of Royal history and gossip from your guide. And catch the best parts of the Changing of the Guard (on certain dates).

*the Mall is closed to cars on Sundays making it an extra special cycling experience.

Ride under this pretty arch that marks the boundary of 'Royal London', and find the secret stone nose located underneath.

Trafalgar Square is the home of many iconic monuments, including Nelsons Column and the National Gallery. It's also the technical centre of London.

Stop for a pint of local beer (optional) at the Lamb & Flag pub in Covent Garden. Once know as the 'bucket of blood' due to its connect with bare-knuckle boxing, the pub is older than the USA and a favourite with locals.

Stop by an ancient Egyptian obelisk on the River Thames to also discover the story of London's amazing Victorian sewage system.

Ride past London's iconic ferris wheel, the London Eye. You'll stop briefly at the best place for a photo.

Visit the Graffiti Tunnel under Waterloo Station, made famous by Banksy, and see street artists painting amazing murals. This is the only 'legal' graffiti zone in the area. And you'll also get to try graffiti yourself as spray paint is provided in the tour.

star star star star star
Tom was an outstanding guide and this was a must-do tour! We were able to see SO much and our guide, Tom, was so well informed and funny. Such a great way to experience a ton of the must-see sights of London. I highly highly recommend this tour.

star star star star star
Tom the drummer was very knowlageable, interresting, witty and attentive to everyone's needs. The itinerary was also well designed. A great way to start our stay in London

star star star star star
Incredible experience with an amazing guide! James was quintessentially British, knowledgeable, and funny. Take this bike tour! It’s better than any others I have taken elsewhere in Europe! You will see parts of London you never knew of … and we even got to spray graffiti on the walls of a tunnel!

star star star star star
It was an amazing experience! Seb was our tour guide and he was so informed and funny! Such a fun and great way to see the city! Can’t speak highly enough of Tally Ho!

star star star star star
We had booked for Sunday September 18th. One day before the Queens funeral and it’s been a crazy cycle/walking tour. Many streets were closed, others so full of people that we were stucked…. But with Katie we had the best guide ever. Patient, friendly, smiling, entertaining and we have learned many things about London. Even though it was not easy she did a great job. Can’t imagine the quality of the tour without all these problems. I can highly recommend the tour and the company 👍🏽👍🏽👍🏽

star star star star star
We had a great time biking with Seb despite the London rain. Seb provided a great overview of the city and lots of interesting facts! We were able to cover a lot of ground on bikes in such a big city. We highly recommend Seb's bike tour!

star star star star star
James’ English banter and commentary was hilarious! Great mustache, too! I find bike tours to be the best way to see a city, and this was no exception! Highly recommend!

Statue of Queen Elizabeth I One of the parks The meeting of the guards