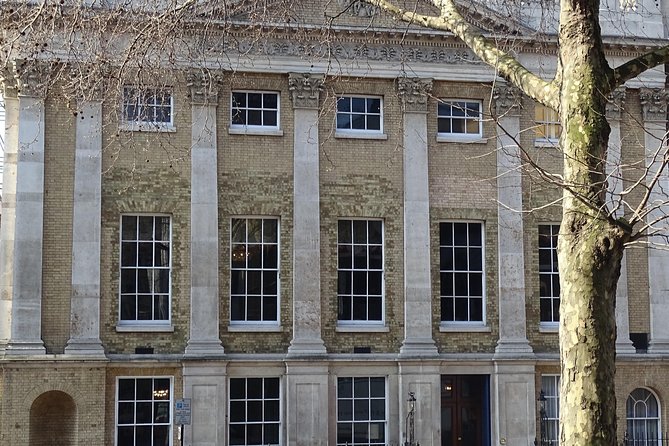 This fascinating tour of two of the most loved areas of London, St James' and Mayfair, lasts for 3-3.5 hours.  St James' developed around the Royals whereas Mayfair was built for the aristocrats so on this tour, you follow in the footsteps of both! The centrepiece of St James' is the majestic palace built by Henry VIII and as you meander the streets in the shadow of its great gate-tower, you will pass the gentlemen's clubs and elegant outfitters which have been a mecca to royals and gentlemen alike for centuries.
Walk a little further north and the tour takes you past the luxurious houses, beautiful gardens and exclusive shops of aristocratic Mayfair before arriving in Shepherd Market which used to be the home to Mayfair's thriving sex industry.
Admire the glamorous shops with their exquisite displays of china, glass and silverware and enjoy the delightful aromas of over 150 artisan cheeses in one of the oldest shops in the world.
Food/drink is not included in the cost of the tour.

INR 12,226
p.p. onwards
Itinerary
This is a typical itinerary for this product

One of London's most sophisticated department stores, it's hard to believe it started life as a market stall! This is where picnic hampers were invented. We will take a quick turn of the ground floor after which you will definitely want to return for a more leisurely browse of the entire store!

the arcade has just celebrated its 200th anniversary. Built by one of the Earls of Burlington, George Cavendish, so his wife and her aristocratic friends would have somewhere to shop in privacy away from the prying eyes of the beggars, the Beadles still guard it to this day. the world's smallest police force, it's great to meet one as we saunter through doing a spot of window shopping.

Dating back to the 1700s, its summer exhibition is a firm favourite within London's 'Society' events.

Most famous for its nightingales which probably never existed, this is one of London's most historically interesting squares. With a forgotten river flowing beneath it, the square is home to many plane trees which survive because they are unaffected by pollution. Whilst we stop here for 10 minutes or so, you can hear the story of the world famous Annabel's night club, the only such club the Queen is said to have visited, and the notorious Clermont Club with the murky tales which attach to it!

An oasis of peace and tranquility in the centre of London, it is hard to imagine you are only 5 minutes walk away from one of the busiest shopping streets in London. But life has not always been so calm here - in the 10 minutes we'll take to wander through these gardens, I'll tell you what lies beneath our feet and what gruesome secret one of the buildings at the side of the gardens holds.

A leafy retreat nowadays but it used to be the centre of Mayfair's red light district where the aristocrats of old, with too much time and money on their hands, went for their entertainment. It was also the downfall of one MP - but which one?! I'll fill you in when we stop here for 10 minutes.

We move from the aristocrats to the royals as we move seamlessly from Mayfair to St James'. Hear the legend of how Green Park gets it name and get your brain in gear to try to take on board some of the Royals who will feature during this part of the walk.

Built by Henry VIII on the site of what used to be a woman's leper hospital, this was intended to be the palace for Henry's son promised to him by Anne Boleyn. But as the son turned out to be a daughter, Henry used the palace as a hunting lodge instead. The palace has been at the centre of many a Royal event so in the 20 minutes we'll take to wander around the outside of the palace, I'll fill you in on some of the most interesting stories from its past. If it's the right day, we might also see part of the ancient Changing of the Guard ceremony.

Weekday home of the Queen, the palace balcony has been the focal point of many Royal celebrations including the Queen's 50th and 60th jubilees and William and Kate's wedding celebrations. In our 10 minute stop, I'll tell more about the Queen and her responsibilities. You'll be surprised at the amount she does!

One of eight Royal parks in the capital, St James' is one of my favourites with its ornamental lake and wildlife frolicking in its waters. With luck we'll catch a glimpse of the resident pelicans, a pair of which were gifted to Charles II in 1664 by a Russian ambassador - there have been pelicans on the water ever since!"

Although best known for its ancient ceremonies of the Changing of the Guard and the Trooping of the Colour, Horse Guards was home to a gigantic sandpit during the 2012 London Olympics - the question is, though, which sport was it for?! I'll tell all as we stop here for about 10 minutes.

Built by Henry Jermyn as a reward for his loyalty to Charles II during the English Civil War, this was the place to live in the 17 and early 1800s. A pretty square, there are still remnants of the days of old with Nancy Astor's former home and one of Sir Christopher Wren's churches gracing its edge.

How better to end the tour than a wander along one of the oldest streets in London. With a cheese shop and a perfumery dating back to the 1700s, this is a fascinating street.

star star star star star
We thoroughly enjoyed our tour of St. James’ and Mayfair with Sandy. We covered a lot of ground during the tour and learned a lot about the history of the neighborhoods and the architectural significance of the aristocratic homes we passed. We also made several fun stops to learn about the various stores and the development of commerce in the neighborhood. We highly recommend Sandy’s tour.

star star star star star
An amazing stroll through Mayfair and St James. Sandy my guide is charm personified and her knowledge was extensive, informative and delivered in an easy friendly manner. If like me you are interested in an extensive and detailed history of the two areas then this is the tour for you. I discovered the history of so many shops and how many of them started at Market stalls. The stroll through Fortnum and Masons was informative and discovered just what an innovative store it is. Most notably the many beehives scattered throughout London rooftops and the frenzy of purchasing when released for sale in late summer. I'm particularly interested in the Regency's period and Sandy went out of her way to take me to particular areas of interest. I can not recommend this tour more highly. Next year when I return to London off to Hampton Court I will go with Sandy.
Previous Next
keyboard_arrow_up