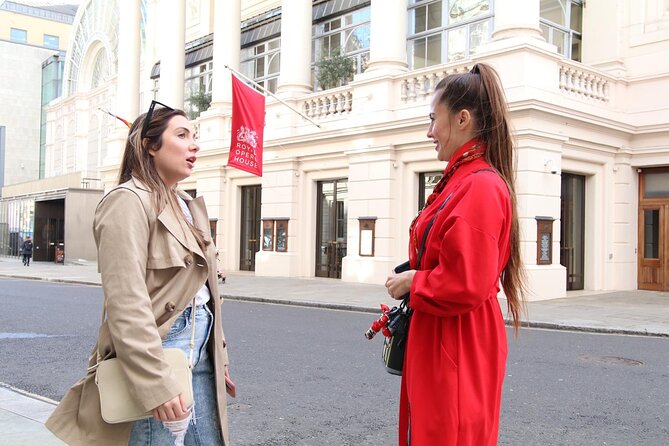 On this tour,​ you will see all the best Queen-related places.

Highlights:
• Stop at the pub where Freddie went all the time
• See where Freddie lived with Mary in the 70s
• Stop by the iconic pub, where Freddie met Brian, Roger and Mary
• Walk by the house where Freddie died and which is occupied by Mary Austin and her family.
• Hear anecdotes about Freddie and Montserrat Caballe
• See the place of Freddie’s very last performance

INR 14,501
p.p. onwards
Itinerary
This is a typical itinerary for this product

You would see where the Queen once had a concert

Kensington Palace is the place where Princess Diana used to live. She was a friend of Freddie as well

You will see where Freddie had his last performance

A birthplace of the song "Barcelona". That is where Freddie met Montserrat Caballe

star star star star star
Such a fun way to explore London and take it beyond the usual sightseeing places. Valery is knowledgeable, fun, and engaging. No regrets. Thank you for the tour!

star star star star star
Excellent walking tour of some awesome sights in London. Valery was informative and very accommodating to our group. We ended the day with the Queen concert at O2 which made the highlights of the Freddie Mercury tour even more exciting.

star star star star star
Our guide Valery was knowledgeable and well-prepared on our trip, a real professional. She personalized our tour taking our expectations and interests into consideration, which I greatly value, especially on a tour like this. Since my husband has long been a fan of Queen, and Freddie Mercury in particular, his bar is high! But Valery managed to fascinate even such an avid fan as my husband. He said that he heard some facts about Freddie he never knew about (well, my knowledge was quite poor comparing to his haha, let alone YOURS <3), and got to see the sights related to his life, particularly on the onset of his career. Truly fascinating experience. P.S. Thank you for answering a myriad of questions Lourenço asked!! Greetings from Portugal!

star star star star star
We had an excellent time in this tour with Valerya. She made every story a real trip to history. We totally recommend this amazing experience

star star star star star
Valery Danko is one in a million. We traveled to London from the USA primarily to see Queen and Adam Lambert in concert and to see where Freddie Mercury resided during his time in London. Our flight was delayed so we did not make it for our tour. Valery was completely wonderful and accommodating and agreed to meet us on a different date and time which worked well for us - I think she had plans that she put aside for our benefit. She offered information about Freddie Mercury that was accurate and informative. I have read a great deal about him and appreciated that she "knew her stuff." It was emotional to see his prior homes and places he created music. Valery was patient as she walked us from one area to another. It is an experience I will long treasure.

star star star star star
As a Freddie Mercury fan I was so excited this tour was available. Our guide had so much insider information about Freddie and Queen. She took us to where they lived, recorded, etc. I can’t wait to take her Beatles tour!

star star star star star
Thank you so much Valery for the tour ! It was a pleasure to wander in the streets with you and see Freddie's homes and places he shared with the band. You are very knowledgeable, funny and I really appreciated that at each stops you took your time to discuss and share anecdotes about Queen. I strongly recommand this tour to any Queen fan !

star star star star star
This tour was beyond enjoyable for us. There is nothing like seeing the places where Freddie and Queen frequented and lived. I am thrilled we booked this tour; it is a wonderful memory and beautiful connection to my favorite band. Valery is delightful and made everything even better. She’s a true super-fan. Book this, you won’t be disappointed. Enjoy!
Previous Next
keyboard_arrow_up