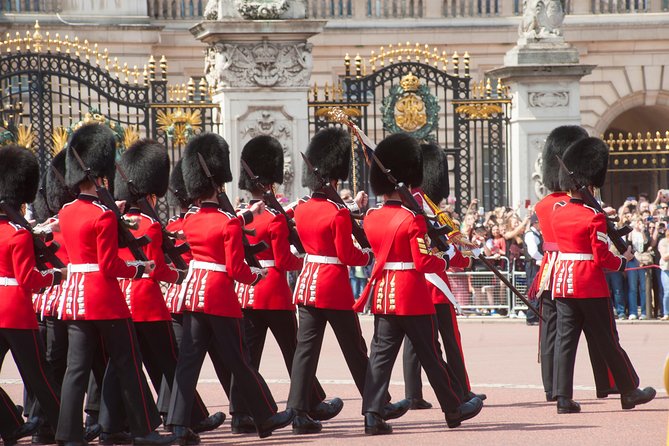 See British tradition come to life on this private or a small-group fully-guided Changing of the Guard and City of Westminster walking tour, where you get to experience two iconic London experiences combined in one morning with a local expert guide.

Witness the age-old tradition of the Changing of the Guard from the best and the most photographable viewpoints, and explore the magnificent Westminster Abbey from outside, accompanied by your guide’s expert commentary.

Private Tour 09:45
Own private group of no more than 25 people

Private Tour 10:30
Own private group of no more than 25 people

INR 2,263
p.p. onwards
Itinerary
This is a typical itinerary for this product

You’ll start the day on a walking tour to the Changing of the Guards. This is a world-famous ceremony which takes place at either the Horse Guards Parade or Buckingham Palace depending on the day - no matter where it is, your guide will show you to the best vantage point to watch the ceremony. You’ll be in prime position to see it take place, and your guide will be there to explain everything as it happens. There is so much history behind this event, and it is a fascinating thing to witness. Wherever your guide leads you to, you’ll be able to see everything and snap some great photographs too. So don’t forget your camera!

Your expert guide will tell you about everything that has happened at Westminster Abbey throughout its 1000-year history. From William the Conqueror in 1066 to the wedding of Prince William and Kate Middleton in 2011, the Abbey has seen a lot and you can trace the footsteps of kings and queens during this exclusive tour.

Now is the best time to to take a walking tour in the Westminster area. With fewer crowds and relevant security measures in place, you can enjoy your trip with the peace of mind that your safety is taken care of. Make memories and have fun feeling like royalty!

During this Westminster walking tour you’ll also see the world-famous Big Ben, home of the Great Bell and its ginormous clock, as well as Whitehall and No. 10 Downing Street, where many political decisions and speeches are made. These are some of the most iconic locations in London, and this walking tour is a brilliant chance to tick everything off in one go.

Stroll down Whitehall, one of the most famous streets in London, which is the main thoroughfare running south from Trafalgar Square towards Parliament Square.

Pass by the world-famous No. 10 Downing Street, the residence of the British prime minister, where many political decisions and speeches are made.

You’ll also get the chance to discover Buckingham Palace and see the stunning building from the outside. Look up at the famous royal balcony, and listen as your guide tells you a whole wealth of royal stories from over the years. The palace, constructed in the 1700s, is a focal point for the British people and somewhere not to be missed on any visit to the big smoke!

star star star star star
We had the best time on this tour! Our guide was very informative and was able to answer any question the group asked her. The weather was agreeable so we were able to do all the things on our list. The Abbey was stunning and we enjoyed the changing of the guards as well. Pro tip - take a light hooded jacket or umbrella - London always has an unannounced sprinkle here and there!

star star star star
Although we missed the changing of the Guards we did see and learn a lot. The weather was rather on the hot side for us but shade was easily found. The marching Soldiers was worth watching and if in London put it on your must do list.

star star star star
They were serious about being on time for this tour. We showed up about 7 minutes late and they were already gone. We had read the wrong meeting time (looked at the wrong voucher) so we missed the tour. They offered to re-book us for the next day, but we were leaving. We re-recreated our own tour without a guide. I am sure it was a great tour.

star star star star star
I really liked walking in London with this tour. It is very different to go in car or bus than walking because you are moving slower and have the option to look carefuly at all details and stop to take some selfies. I enjoyed seeing the guards.

star star star star star
Our tour guide was very informative and packed a lot into the time that we had. The sights and surrounds of London came alive with his well researched commentary. I would recommend this tour to anyone looking for a light touch yet interesting overview of London inner city sights.

star star star star star
Tour was perfect for what we were looking for. Small group and fast paced with plenty of information about the Abbey, Buckingham Palace, and all things London. We were only in London for 3 days so the Fast-Track tour was great for us. It’s quick but long enough to get all the facts you could hope to learn. Highly recommend for people who want a different experience than a simple audio tour. Book it and feel good about it!

star
DO NOT RISK BOOKING A TOUR with TripAdvisor. This is the second time that this has happened to me in a year. A tour is advertised, they show it is available, you book it, they charge your credit card, then they come back a day or 2 later and say it is cancelled, and refunded, because they could not actually confirm the booking with the tour provider. Of course, at that point, there is no time left to find another tour and you are left without a tour. I will never book a tour again with Trip Advisor. I cannot take the chance that I will be on a trip overseas and get stuck without a tour because they never actually had availability even though they said they did. It's not like I can come back next week to try again. Very poor way to run a business!

star star star star star
This was a wonderful tour. Our guide gave us a lot of information about British history and provided a wonderful explanation of the changing of the guard process. He also did a great job of getting us in key positions to have front row views. The entrance into the palace with the tour was pretty simple and quick. The palace tour is at your own pace with an audio guide and is well worth the time. We loved this experience!

star star star star
Westminster Abbey was no. 2 on my list after Tower Bridge, The whole feeling that you are visiting where Newton and Shakespeare and such great people are resting in peace gives you goosebumps.. As in was really eager to visit the Abbey .. so totally worth it

star star star star star
The tour commenced Sep 24th 9 am sharp at Westminster abbey .. on time and with a fantastic tour guide. She was very knowledgeable, organized and patient. You can tell she has been doing this for a while as she knew even when were good bathroom breaks for the kids :) and we appreciated that. Because of her, we did not have to stand ridiculously in line to see the change of guards, but we actually were perfectly located (thanks to her) to see the parade coming by us - band, horses, shining uniforms... wow!.
Previous Next
keyboard_arrow_up