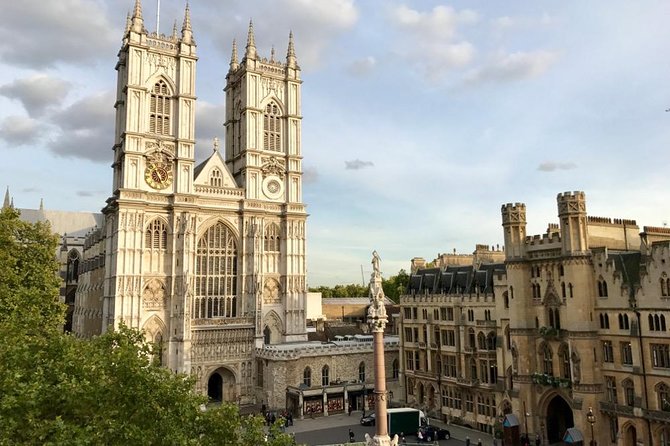 Step into the heart of the British democracy with the only fully-guided visit through Westminster Abbey and the Houses of Parliament. With an expert guide and small group, this an intimate and informative way to visit London’s most exclusive building.

INR 6,690
p.p. onwards
Itinerary
This is a typical itinerary for this product

Your day begins with a skip-the-line entry into Westminster Abbey, the most serene time to see Britain’s most cherished church. With roots dating back over 1,000 years, this Gothic masterpiece is the traditional coronation site and burial ground of kings and queens, along with national heroes like Isaac Newton, Charles Darwin, and William Wilberforce. On your visit, you’ll learn from a local expert guide how the British monarchy helped shape the country’s conversion to democracy, as well as a few interesting tidbits about Winston Churchill, one of the only non-royals to ever lay in state in the Abbey after his death.

Next, you’ll head into the engine room of British democracy; the Chamber of the House of Commons, where Britain’s elected Members of Parliament come to face off (literally) over how to run the country. Here you’ll see the lines that may or may not have spawned the phrase ‘toe the line’, and learn about the centuries-old ceremonies that keep this modern legislative body firmly connected to its ancient past - including why this is the only room in England that the Queen is not allowed to enter.

star star star star star
This was a lovely experience. The state rooms of Windsor Castle and Buckingham Palace are truly elegant. Recommend for admirers of history, art and architecture.

star star star star star
Outstanding tour. I feel like I got a ton more out of it by having the guided tour experience at both the Westminister Abbey and Parliament. Our guide was very knowledgeable and did a great job leading us around and adding in fun facts. I would highly recommend this vs. the pre-recorded options.

star star star star star
We very much enjoyed the tour and our guide, Rhys, was a real bonus. Not only did he know his stuff, but the added quotes and bit of poetry was fun.

star star star star star
We enjoy the tour, our tour guide was very knowledgeable and nice. Very exciting going to Westminster Abbey and very interesting the visit to the Parliament . The tour always on time and organized.

star star star star star
Emily was a fantastic tour guide. You Can tell that she is truly fascinated by the information that she is presenting. I could easily had spent all day with her learning just about Westminster from her. We were disappointed in the evacuation from Parliament due to protestors but glad to see Emily waiting for us at the end.

star
We will request a refund. Your Doc stated 1:30pm. Tour operators changed time without notifying ALL Guests. Sadly we did not see Westminster Abbey & Parliament as scheduled . Susan led a group at 1:00 but she obviously did not have the entire group assembled. She left behind aprox 10 paid visitors. We traced from the US & the tour was planned ahead. Disrespect of your guests time is unacceptable

star star star star star
Loved the tour! Our guide Emily was fantastic and really made the tour educational but also fun. She was so knowledgeable of Westminster and guided the group around with ease. Highly recommend this tour.

star star star star
The Westminster Abby tour was wonderful with our Guide (Linda?) then we went to the houses of parliament where it switched to digital… We were supposed to have an in person guide and I think we would have gotten more out of the in person guide however the tour was still nice and we asked questions from the security officers who were in the houses of parliament and they were very knowledgeable.
Previous Next
keyboard_arrow_up