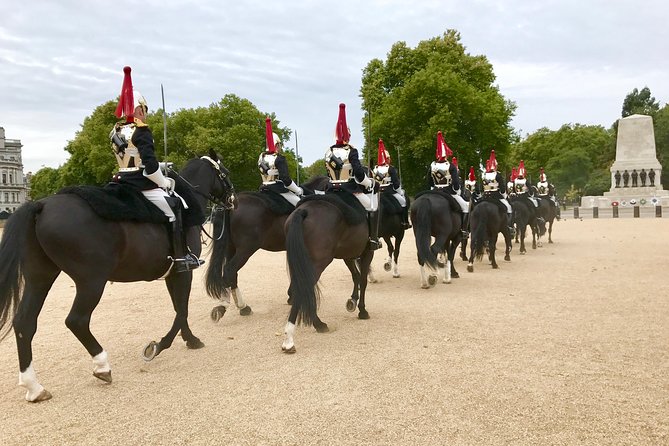 London In a Day: Tower of London, Westminster Abbey & Changing of the Guard

Immerse yourself in the quintessential sights of London on this comprehensive, fully-guided walking tour of the city’s most popular attractions. Includes Westminster Abbey, Buckingham Palace, Changing of the Guard, Trafalgar Square, Thames Boat Cruise, Tower Bridge and the Tower of London.

INR 10,614
p.p. onwards
Itinerary
This is a typical itinerary for this product

Your day begins in Westminster Abbey, where you’ll take advantage of pre-reserved tickets to visit England’s most hallowed church, before most of the crowds arrive. As you stroll across the beautiful Cosmati pavements and peer up into the elaborate vaulted ceiling, your guide will introduce you to the church’s tumultuous history, which mirrors that of England.

Get up close to see the Guards at this expertly sourced spot!

After the group have watched the band march out of the barracks, proceed to Buckingham Palace

Headquarters of the London District of the British Army and of the Household Cavalry.

One of the focal points of London - Named after the naval Battle of Trafalgar 1805, Nelson’s great victory over the French in which he lost his life.
The Nelson Monument – better known as Nelson’s Column, 172ft high

Board your afternoon Thames River cruise

The famous Tower Bridge originally painted in Queen Victoria’s favourite colour – chocolate brown, but later went a dull grey. In 1976 it was repainted blue and white with touches of red and gold.

The only remaining castle/fortress in London

star star star star star
My husband and I did this tour on our second day in London and it was fabulous! Sal was our tour guide and his level of knowledge for London history and inserting interesting stories and facts along the way made it so memorable. I highly recommend this tour for anyone who is visiting London for the first time and desires a more personal small group guided option for seeing the stunning Westminster Abbey, Tower of London and great boat ride on the Thames.

star star star star star
This was an excellent tour. We saw the major sites and our tour guide was well informed and knew how to get us to all the sites timely.

star star star star star
Our guide Richard was wonderful! Very informative, friendly, helpful, and truely seemed to LOVE sharing London with others. He made a special point to make sure we were in a fabulous position to watch the opening of Tower Bridge for a Brazilian Warship to come through. Thanks for an amazing day!!

star star star star star
Excellent guide on a blustery , rainy day . Lot of walking and suggest that option be given for cab or van for more elderly and physically compromised to and from the Palace to the Abbey . Good content and humor laced with exacting facts made Salvatore the perfect guide .

star star star star star
Our tour was hands down fantastic! Our tour guide was Nick and he was great with everyone but especially our 8 and 10 year old. He made them Seek and Find lists for when we were in the Abbey and on the River boat. What a great tour— I would do it again!

star star star star star
Guy was a constant source of entertainment. Witty and charming. Able to turn on a dime when there were complications. Highly recommend

star star star star star
Nick was a fantastic tour guide thoroughly enjoyed it!! We saw so much of London in one day. Would highly recommend this tour!
Previous Next
keyboard_arrow_up