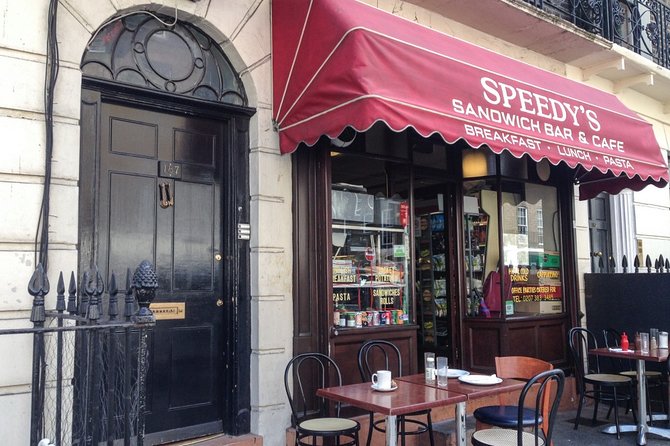 For all Sherlock Holmes fans! The perfect tour to take you deep into the world of the great Detective and the loyal friend Dr Watson.

Ideal for those that love a mix of the Traditional Sherlock Holmes stories and the newer BBC series 'Sherlock' starring Benedict Cumberbatch and Martin Freeman.

Your guide is a dedicated Sherlockian who has an in-depth knowledge of all things Holmes and Watson. The tour will take you on a journey weaving the traditional Conan Doyle stories and old London to the modern world and locations for the smash hit TV series.

Your guide has a 100% Five Star Trip Advisor review rating.

• All the key BBC Filming Locations
• Locations from the original stories
• Expert guide Who is a huge Sherlock Holmes Fan
• Arthur Conan Doyle related sites
• Fun and informative with relaxed pace.
• Very Small Group. Max 6. Hear and interact with your Guide easily
• Other iconic London locations included on the tour.

INR 4,510
p.p. onwards
Itinerary
This is a typical itinerary for this product

It doesn't matter if you are a die hard traditionalist or a modern BBC "Sherlock" fan. I am a nerd for everything Sherlock Holmes and have got you covered! This tour is designed to give you details on the history and locations of the original Sherlock Holmes stories by Sir Arthur Conan Doyle and important filming locations from the recent BBC series. This tour also covers some great London landmarks like St Paul's Cathedral, Trafalgar Square, The Strand, and the place where William Wallace (Braveheart) was executed.

Starting at Embankment station you will be given an overview of the traditional stories by Sir Arthur Conan Doyle before your guide takes you to the Sherlock Holmes Pub (a location from Hound of the Baskervilles) The upper rooms contain a recreation of Sherlock's sitting room at 221b Baker Street. Then its on to Scotland Yard and the location where Inspector's Lestrade and Hopkins work. Not that Holmes has a particularly high opinion of the Yard Detectives!

Now its time to see a famous location from the BBC Sherlock series. Remember the scene where Holmes and Watson have just met and are having dinner. They spot a suspicious taxi, Watson leaves his walking stick behind, and they run through the streets trying to catch the Taxi. We will make a stop at that very restaurant!

The site of Molly's laboratory, and the first place Holmes and Watson meet in the new BBC show, and also in the traditional books by Conan Doyle. This is also the location of the famous scene where Holmes jumps from the building after confronting Moriarty. The area also has a lot of other interesting buildings and stories which your guide will share with you.

The area of Russell square has a long association with writers. The Bloomsbury Group were based here, and so too was Arthur Conan Doyle in 1891. We will pass Sherlock's home before he moved to 221b Baker Street, and go to the spot where Mike Stamford met Dr Watson in the BBC series Sherlock. The route will also pass other filming locations from the BBC show.

For many people this is the highlight of the tour. The 221b Baker Street in the BBC series "Sherlock". There will be plenty of time to pose for photographs outside the house, and even enjoy a drink or snack in Speedy's Cafe. On the walls of the cafe are photos of the cast and crew from the show. from series two Sherlock and Watson often discuss a case or buy their morning coffee at Speedy's.

The meeting point for fans from all over the world. This statue was commissioned by the Abbey National building society who occupied 221 Baker Street. They received so many letters from around the world they had to employ someone to deal with the requests. Your guide usually carries a Deerstalker cap, and you will be welcome to to use it pose with your hero for a photo.

Located in Baker Street the Sherlock Holmes Museum is set out as the home Sherlock and Dr Watson share with Mrs Hudson. It matches exactly the descriptions given by Sir Arthur Conan Doyle. Your guide will end the tour here and leave you to enjoy the shop and museum. If you have any further questions or require any assistance for onward travel your guide will be pleased to assist.