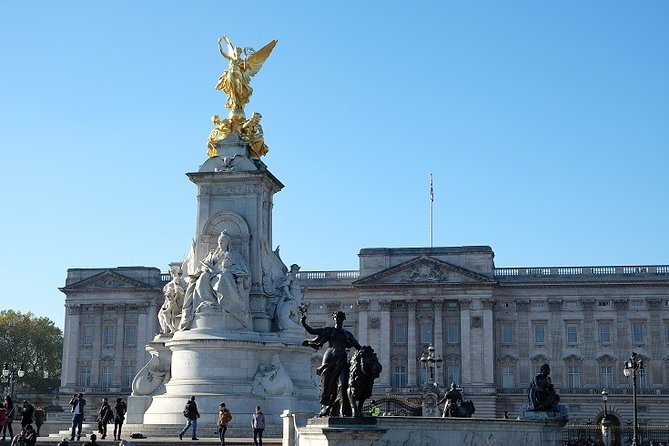 Take a very small group tour (Max 6 People) with your five star rated Guide through Royal London to the sites most closely associated with Her Majesty The Queen and the Royal Family.

This tour not only covers the history of the Royal family and the buildings most closely associated with them, it also delves into the businesses, boutiques, and stores the Royal family use and award Warrants for their own provisions.

The tour also includes key sites associated with Princess Diana and her family, as well as people closely associated with the Royal Family such as Sir Winston Churchill.

Changing of the Guard takes place, (Mon, Weds, Friday) if booking the morning Tour at 9:30am, you will have the opportunity to experience the ceremony by walking in step with the Guard as they make their way to the Palace.

Many famous landmarks including Buckingham Palace, Big Ben, House of Commons, St James Palace, The Ritz and more are covered on the tour.

Birth Place of Her Majesty Queen Elizabeth II.
See the most exclusive and expensive area of London. The Queen was born in Mayfair in 1926 and we will visit the site of her birth.

Winston Churchill spent many years of his life in Mayfair, and for those interested we can stop at a few spots associated with the Prime Minister who was said to be Queen Elizabeth's favourite.

A walk around the shops and businesses that the Royal family use and issue Royal Warrants to. You will have the opportunity to stop at stores as well.
Including places associated with Princess Diana and her family.

The most famous building in London and Home to Her Majesty the Queen and members of the Royal Family.
This has been the official home of the Monarchy since the reign of Queen Victoria.

Here you will learn about the history of the Palace, and for the morning tours (9:30am) your Guide will take you to see Changing of the Guard. This will be a much better experience than squashing up against the rails or struggling to get a good spot. Let your guide get you closer to the action.

You will then follow the Horse Guards down the Mall.

The home of Prince Charles and The Duchess of Cornwall.

Many people want to see a Changing of The Guard while in London. So naturally people gather around Buckingham Palace. Unless you get there early and squash up against the railings its hard to see much. Experience the Guard change a little differently and get up close and walk in step with the guard as they walk to the Palace. A much nicer experience, Then follow the Horseguards down the Mall as they prepare to change Guards at Horseguards Parade.

The former Tiltyard (or Jousting area) from King Henry VIII's Whitehall Palace.
Now this area is used for Trooping of the Colour, and the Queen's Birthday Celebrations.

The area is full of Royal History and your guide will bring this to life for you.

Stop At: The Savoy, London England

One of the most exclusive hotels in the World.
The bar of the hotel was a favourite of The Queen Mother and Princess Diana. The bar still serves their own signature Cocktails.

Next door is Simpson's in the Strand. A restaurant with Royal connections, and favourite of Sherlock Holmes.

Site of Royal Coronations since 1066, The Wedding Venue for Prince William and Catherine Middleton. It was at the Abbey in 1997 that Princess Diana's Funeral service took place.

The House of Commons and House of Lords housed in what is officially known as the Palace of Westminster. Here is of course the famous "Big Ben". So how do these all tie in with the Royal Family and our Queen today? Your guide will untangle more than 1000 years of Royal History.

star star star star star
This was an amazing tour and Richard was delightful and had lots of knowledge about the history of the city.
Previous Next
keyboard_arrow_up