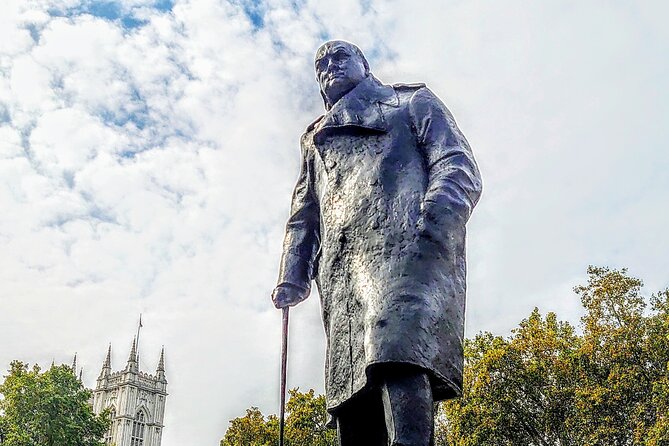 Follow the life of Winston Churchill by taking a private tour through the most important and personal sites he knew so well, including skip the line entry tickets to The Churchill War Rooms.

Trace his life, career, style and passions through the streets, shops, and buildings special to him. Starting at his childhood home, and those of his great ancestors, the tour moves on to his bachelor days and homes he lived in during his early married years.

"I am a man of simple tastes; I am easily satisfied with the best" - Visit tailor shops where Winston Churchill had his suits and hats made, including the famous 'Siren Suits'.

Churchill's trade mark Cigar barely left his lips. Visit his Cigar Merchant and sit in the great mans chair. (Smoke a Cigar too if you like)

The second part of the tour focuses on the career of Churchill, including The Houses of Parliament, 10 Downing Street, and of course entry to the Churchill War Rooms.

A fully private guided tour tailored to you.

INR 11,222
p.p. onwards
Itinerary
This is a typical itinerary for this product

Winston Churchill was born at Blenheim Palace in 1874, but his early years were spent in London. His father Lord Randolph Churchill was the son of the 7th Duke Of Marlborough, the family name being Spencer-Churchill we will start at Spencer House and the smaller house next door where a young Winston grew up. We will talk about his great ancestors, and his relationship to Diana Spencer, (Princess Diana)

This part of the tour focuses on the young, ambitious, war hero and bachelor Winston Churchill, keen to make a mark in the world.

We will visit his Bachelor pad, and the home he set up with his Wife Clementine, plus a visit to some of his favourite tailors.

You will also have time to pose with Churchill and Roosevelt at the Allies Statue.

This historic Saville Row Tailor has had a long association with the Churchill family. They made suits for Winston's father Randolph, and many for Winston throughout his life. (They produced the famous Pinstripe Suit in the Tommy Gun photo of Churchill.) Apparently Winston Churchill still owes the company some money, and the Tailors would always find Cigar Stubs in the pockets when suits came in for alterations.

Recently Henry Poole and Co were called upon to make Gary Oldman's suits for the movie The Darkest Hour.

"I am a man of simple tastes; I am easily satisfied with the best." - Winston Churchill.

This exclusive shopping area in St James mainly caters to discerning Gentleman with deep pockets. This is where James Bond buys his clothes and Cologne! You will see many of the Sir Winston Churchill frequented shops, including those selling his preferred aftershaves, and even his favorite Cheese Monger.

Churchill was a snappy dresser, but sometimes he needed something practical but comfortable when out in the grounds of his country estate Chartwell, or during the cold nights watching the bombs falling over London. Enter the 'Romper Suit' or 'Siren Suit' as it became known. Churchill trusted only one company to make these to his specifications, his shirt maker Turnbull & Asser.

This company was also the first company Prince Charles gave a Royal Warrant to.

Sir Winston was hardly ever pictured without his trademark Cigar. His favorite brand was Romeo Y Julieta. On this tour you will go to the Cigar Merchant where he bought his Cigars, you can sit in his chair, and even sample a Cigar in the upstairs lounge!

This St James Hatters has been making hats since 1676. They are the Worlds oldest Hat Shop. In that time they have made hats for some of the most famous (and infamous) people in history.

Sir Winston Churchill adopted Lock & Co's Cambridge and Homburg Hats as his trademarks, a long with his Cigar.

On 12th September 1908 Winston Churchill married Clementine Hozier at this Church right next to Westminster Abbey. Known as the Parish Church of the House of Commons it was a regular place of celebration, memorial or thanksgiving during the life of Winston Churchill.

Across the road from the Houses of Parliament the statue of Sir Winston Churchill gazes at his beloved House of Commons.

Churchill was offered a peerage, and a Dukedome but turned them both down as this would stop him or his male descendants serving in the house. Let's pause here for a while and discuss the political life and anecdotes of this extraordinary man.

It's no secret that Churchill loved a drink, and he also loved tradition.

This Pub has served every Prime Minister a drink including Winston Churchill. He certainly wasn't going to break that tradition!

The official residence of the Prime Minister since Robert Walpole.

This famous little street is known the world over. The door that Winston Churchill walked through as Prime Minster in 1940 is preserved and on display in the Churchill War Rooms.

This is an optional stop, a sad one and one that requires some extra walking, but for Churchill fans it may make an important stop to pay respects at the home where he died in January 1965. If you would like to add this stop, please let me know at the start of the tour so I can adjust the itinerary to include it.

Your tour includes full entry to the Churchill War Rooms, the secret underground headquarters of the War Cabinet during WW2.

Everything you see in this underground complex is original. The maps, charts, stationary, telephones, even the ashtrays are as they were left in 1945 when the War Rooms were locked up and left, making this one of Britain's most important WW2 sites.

Once America entered the War, this bunker became one of the key meeting sites for allied operations and planning, and many famous generals including Eisenhower met with Churchill here. As did King George and Queen Elizabeth when they met the Churchills for dinner in the bunker.

The former administration wing of the War Rooms now contains a huge Museum dedicated to the life and legacy of Sir Winston Churchill. You will be able to follow his life and career, and see many of his personal belongings.

As your Private Guide, I will escort you into the War Rooms with skip the line access and offer you an introduction to the site, and advice on getting the most out of your visit, then I will leave you to enjoy this historic site at your leisure.

star star star star star
Richard was an excellent guide, showing us all of the Mayfair homes where Churchill lived, recounting Churchill's childhood, and climb to prominence, which I recalled from reading the Andrew Roberts biography of Churchill. He pointed out Churchill's personal items in the War Rooms to be sure to spot, and it was fun to find them--the pocket watch, the pistol. Thoroughly enjoyable tour, Richard; we loved it! Can't wait to see your home town of Cowes!

star star star star star
Richard is the BEST! He is so well versed in all things Churchill. We learned sooo much. And not just the war info but also things like here is the place he bought all his cigars and getting to go into this fantastic smoke shop with a little museum of Churchill ledgers etc. So many extras he adds to give you a complete picture. And also helpful tips on where to stand to see the changing of the guards without the big crowds. Both my husband and I felt like we were with a friend showing us around for 4 hours. Then we spent even more time on our own in the Churchill War Rooms which he includes the ticket price in what you pay for your tour. Heartily recommend Richard and his tour. So knowledgeable and so reliable and you have a great time with him!

star star star star star
If you are a Winston Churchill fan this is the tour for you. Very detailed information on his life. Loved going into the shirt and cigar shop. The Churchill War Museum at the end is a good way to put everything in perspective. Excellent way to spend the day in downtown London.

star star star star star
This is an amazing view into the not so distant past. If you are an aficionado of WW II history, do allow yourself time to truly delve into the Churchill history even after you’ve viewed the war rooms. I didn’t allow myself enough time for this visit; I would reserve at least two hours even if you’re not a history buff.

star star star star star
It was amazing! I went with my family and they loved it. A very recommend tour if you want to get to know Winston Churchills life and story.

star star star star star
Well worth the experience. Richard was very knowledgeable, and interesting. Has wonderful stories regarding Winston Churchill entire life. I would highly recommend his tour.

star star star star star
Richard’s private tour was wonderful. He is friendly, interesting and extremely informed on Winston’s life. Not only did we see many places where WC lived throughout his life, Richard provided funny tidbits about him. He brought us to the War Rooms and made sure we got admitted quickly and began our own visit of the War Rooms. It was a thoroughly enjoyable afternoon.

star star star star star
Richard’s stories of Winston’s early life really helped me understand the man he became. He also set up my visit to the War Rooms and the Churchill Museum. Allow time for this at the end of Richard’s tour. I easily spent two hours but could have taken much longer.
Previous Next
keyboard_arrow_up