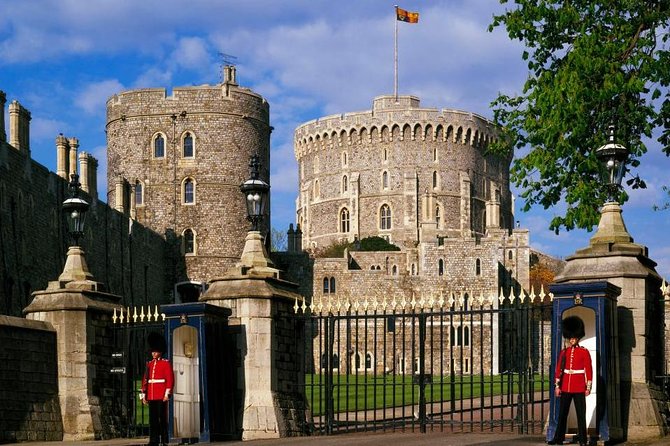 Private tour from London to two of England's most historic and iconic treasures.

You will be picked up direct from your accommodation by private vehicle and your journey through 1600 years of combined history begins!

Windsor Castle was founded by William the Conqueror in 1070, and since then 39 Monarchs have resided at the Castle. On May 19th 2018 Prince Harry will marry Meghan Markle at St Georges Chapel within the grounds at Windsor.

Hampton Court Palace - Most famous as the home of Henry VIII, but also a Royal Palace for many others including Elizabeth I, Charles I and joint monarchs William and Mary.

Tour Prices 08:30
Tour For 2 People: A private and personalised tour to Windsor Castle and Hampton Court Palace. Non rushed and at your leisure - For TWO PEOPLE
Pickup included

INR 36,460
p.p. onwards
Itinerary
This is a typical itinerary for this product

I will pick you up from your central London accommodation in my comfortable private vehicle for a personalised tour of Windsor Castle, Windsor Town and Eton.

Starting in the historic centre of Windsor we will discover the hidden passages linking the Castle with the nearby Pubs. We will see the famous crooked house, and then go up behind the Castle to get a view most people miss when they visit.

Once we have seen the historic heart of Windsor, we will head to the Castle and skip the long queues. Then it will be time to get a good spot to see the Changing of the Guard Ceremony.

Many people dream of visiting the Queen and Royal family. When you visit Windsor Castle you are quite literally a guest of Her Majesty. This is a real working Royal Castle and home to Queen Elizabeth II.

Founded by William the Conqueror in 1070 this is one of the must see sights in the UK. Windsor Castle is the oldest occupied Castle in Europe, and has been home to 39 Monarchs.

You will have ample time to explore the Castle and splendid State Rooms used by the Queen to meet Heads of State and World Leaders.

This is a tour at your pace! no strict time schedules (except your own) As your private guide, I will guide you around all areas of the Castle open to the public, and of course be on hand to assist with photographs.

Within the grounds of Windsor Castle, St George's Chapel holds the tombs of Henry VIII, Charles I, George VI and Queen Elizabeth the Queen Mother among many others.

It is the home of the Order of The Garter, and in recent years has become a Royal Wedding venue again, most notably the wedding of Prince Harry and Meghan Markle.

The chapel is considered one of the finest examples of late medieval Gothic architecture. Sitting in the Quire you will be able to gaze up at a viewing gallery built for Catherine of Aragon to watch services below. All around you the walls are adorned with the brass plaques of former Knights of the Garter, some of which date to the 1390's.

Let me show you the interesting and sometimes hidden areas that many people don't spot when walking around with an audio guide!

Hampton Court Palace is a place that just oozes history. Fortunately you have your own guide to help bring the history to life!

Wondering around the courtyards and corridors you are transported back to Tudor times when this became a Royal palace for the notorious Henry VIII. This was home to the King and his ill fated Wives. It was also the birthplace of Edward VI and home to Elizabeth I.

star star star star star
Richard was an amazing tour guide! He was very knowledgeable and stayed with my daughter and me every step of the way. He made us feel very comfortable, and treated us like we were visiting friends. Richard really went over and above to make sure we had the best day ever!! I highly recommend him for any private tours you are considering!

star star star star star
Richard our tour guide was extremely knowledgeable and accommodating. We learned a lot from him. We had a great day and made great memories!

star star star star star
We had a great full day private tour with Richard. He picked us up from our hotel promptly and his var was comfortable. He was very down to earth and knowledgeable. We enjoyed our tours of Hampton Court and Windsor . It was a great day. Thanks Richard!!!!

star star star star
Wonderful way to spend a very full day for history lovers. Private tour is ideal see and learn much more and go at your pace not that of the slowest person. Guide is pleasant and knowledgeable. Regardless of traffic, as it is a norm in a big city such as London and the professionals need to account for that therefore Would have preferred to start on time as we are here for a short period of time and had much planned for the day. Hampton court palace was for us a far more awesome experience, sadly not enough time to spend is the little town of Windsor had to make up for lost time and keep going. Highly reccomend the tour and the guide.

star star star star star
What a day!!! Picked up on time at our hotel, traveled to glorious Windsor and experienced the majesty of it all with the expertise of Richard. Every detail orchestrated in such a way that we were filled with knowledge while never feeling rushed. Continued on to lunch and majestic Hampton Court. Each location navigated with ease and Richard’s devoted attention. A day that was so fulfilling and beyond our expectations!!! Our thanks to Richard for making the day one that we will forever cherish! Five star tour and 1st class guide! ⭐️⭐️⭐️⭐️⭐️
Previous Next
keyboard_arrow_up