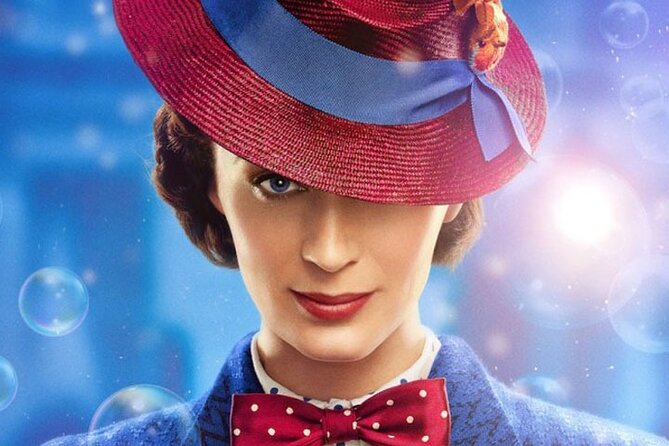 With this fun walking tour, you'll spend 2 hours exploring some of the locations featured in the Mary Poppins sequel as well as sites referred to in the 1964 original. Some of the highlights include St Pauls Cathedral, the Bank of England, the City of London and more.

INR 1,221
p.p. onwards
Itinerary
This is a typical itinerary for this product

Grab your talking parroted umbrella and follow us as we explore the historic streets of the City of London. Come and join the Mary Poppins Tour of London and explore on foot the magical fun packed walking tour of the film locations and inspirations in the capital. Join other Poppins fans and learn about everyone’s favourite nanny, how the films were made, the books and test out your Mary Poppins knowledge is. Can you imagine that.

On this tour, you will see where Mary Poppins Returns was filmed, and soon you’ll believe that everything is possible — even the impossible. You’ll discover a street sign that is not as it seems, because a cover is not the book! We will also visit the now famous corner steps where the bird lady sits. We try not to feed the birds, but you can sing to yourself and snap a few photos, too.

A tour about this Edwardian nanny and chimney sweeps would be complete without a trip to the rooftops of London, so take flight as we visit a rooftop terrace to enjoy stunning views of St Paul’s Cathedral and the London skyline.

We end our tour at the bank, of course, where Michael invested his tuppence and saved the family home.

The 2 hour walking tour includes many of the film locations and inspirations from the new film Mary Poppins Returns, and inspirational locations from the books including the Bank of England, the Royal Exchange and the sites used for the streets of London. As we walk, you’ll also get to see many other familiar landmarks along the way. Your tour guide will point out some historic locations and provide additional information, providing a practically perfect mix of fiction and reality. Time for a jolly holiday where we trip the light fantastic!

star star star star star
Amber was exceptionally good and so nice to the whole family. She really engaged with the kids and made them part of the story telling which was great.

star star star star star
Amber was a great, enthusiastic and knowledgeable tour guide. She shared lots of information about Mary Poppins, including where parts of Mary Poppins Returns were filmed in London. She also told us about other important and interesting London monuments and buildings that were passed along the way.

star star star star star
What a great day, the Mary Poppins walking tour was brilliant. Fiona was our tour guide she was great and kept the tour fun. Definitely recommend to any movie fans or anyone who just loves to see different parts of london.

star star star star star
Our Tour was delivered by Fiona. Fiona was full of great knowledge and exuded enthusiasm about the subject offering broader insights into the Poppins films and other facts for the fan. Tour was managed at a pace for all and Fiona was very considerate to alls needs.

star star star star star
Fab tour! Experienced plenty of locations and loved the secret inner temple section - never knew that was there! Big thanks to Amber who was superb 👏

star star star
There was more silent walking than any talking, my daughter and I found it quite boring just following at quite a fast pace, then stopping for such little information. Hopefully your other tours are better.

star star star star star
Catherine was extremely informative and we enjoyed every second! It was very enjoyable learning about the different locations for Mary Poppins; and even some hidden gems!
Previous Next
keyboard_arrow_up