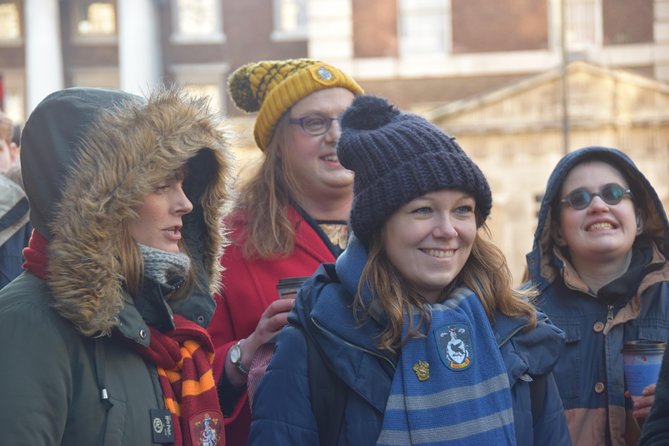 On this 2 hour walking tour of Harry Potter film locations you’ll visit 10 sites used in London, learn about how the movies were made, the books by JK Rowling as well as some of the fascinating London landmarks you'll pass along the way.

INR 1,128
p.p. onwards
Itinerary
This is a typical itinerary for this product

The site of the magical pub Harry visits with his giant friend in the first Potter movie.

See where the triple decker bus drops Harry at the magical pub in the third movie.

star star star star star
Great fun. Our tour guide, Benny, was gregarious and started to connect with everyone from the get go. On the tour he was knowledgeable and funny. And worked to keep everyone together on the London streets and the tube.

star star star star star
This was a cool tour! You get to see sites where they filmed scenes from the movies! In addition you get to walk around London and see a lot of great sites! Bring your walking shoes and lots of water!

star star star star star
I loved every minute of the tour with Eva.She is so kind,funny and passionate about her job. We had a very nice experience in which we wish it was longer. 100% recommended.

star star star star star
Val was our tour guide and she was EXCELLENT! We have been on a number of tours, in various countries, and Val was one of the best tour guides we've had! She was extremely professional, very knowledgeable about all the locations and information about all the HP movies. She was always keeping an eye on everyone's safety with a genuine caring and positive attitude throughout the tour....despite being the hottest day on record (40.3 C or 104.5 F)! The price is very reasonable for this level of quality touring, so feel free to tip her a few pounds if you book a tour and agree. Thanks for a great experience Val!

star star
The group was way too large extremely disappointing. Pictures shown were very poor and it did not include draagon alley. She spoke way too quickly. I will certainly not be recommending.

star star star star star
Together with a friend we truly enjoyed this walking tour in a group of approx 20 people. Jenny was an amazing guide - very energetic, witty, it was very easy to follow her stories with big interest! She was very attentive and caring for the group. It's cool that not only HP related facts, but also general historical information on some landmarks was shared. Definitely suggest!

star star star star star
My family had an awesome Harry Potter walking tour with our guide, Owen. Two adults, two boys ages 10 and 12. At the end of our London vacation, this tour was one of our highlights! Highly recommend.

star star star
There was way too much walking for the number of stops. Not recommended for people with limited mobility.
Previous Next
keyboard_arrow_up