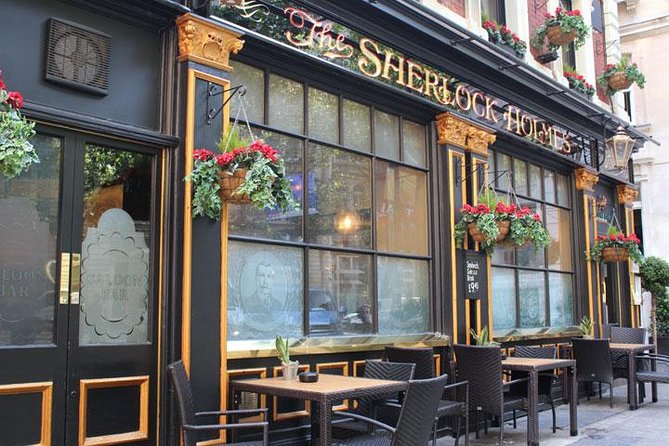 Spend the morning hot on the heels of Sherlock Holmes in London, learning about the popular Victorian detective while seeing countless filming locations and literary haunts. The 2-hour tour is led by a film-expert guide, who’ll introduce you to sites like Somerset House, the fictional Diogenes Club and more, used in adaptations like Guy Ritchie’s 2009 film ‘Sherlock Holmes,’ as well as the 1979 thriller ‘Murder by Decree.’ So, book now! As the man himself would say: ‘It’s elementary, my dear Watson.’

INR 1,203
p.p. onwards
Itinerary
This is a typical itinerary for this product

The tour ends at Somerset House, to see the site that was used as Pentonville Prison in the 2009 film. While the grand Neo-Classical façade of the building couldn’t be more different to the real-life prison, your guide will bring scenes from the film to life with tales of the baddie who was held there – Lord Blackwood.

When your Sherlock Holmes tour of London is over, finish your tour here overlooking the River Thames - the artery that runs through the city of Sherlock Holmes.

Meet your guide at Piccadilly Circus in central London, and then set off on your walking tour, hearing about Sherlock Holmes – the fictional sleuth from Sir Arthur Conan Doyle’s late 19th-century stories. The escapades of the deerstalker-clad detective were so popular that film adaptations followed the books, and filming sites are now scattered around the capital.

Murder by Decree, which featured the pair. Visit the Royal Academy building, which was used in the film, and stroll around some of the pubs and grand hotels that were mentioned in the books.

Sherlock Holmes, starring Robert Downey Junior, followed by a walk to the Diogenes Club as seen in

BBC Sherlock – a fictional gentleman’s club where a strict no-talking rule was imposed. After stopping for photos outside, you'll see numerous locations linked with the famous detective.

star star star star star
Our guide, Ian, made every accommodation for me as a wheelchair user, and did so without any fuss. I found the tour extremely interesting,(as did my 13yr old daughter) just the right length, and Ian was very approachable and happy to expand on any point he had made or simply to chat about other aspects of London. Very worthwhile couple of hours.

star star star star star
We received x2 tickets as a Christmas gift, and it definitely didn’t disappoint!! Very engaging and light hearted fun for an English teacher on her London holiday. Thank you Ian for our tour :)

star star star star star
There is a tremendous history of Sherlock Holmes (in all its forms) in London and this tour gave us a glimpse of each of them. Whether it's from film, plays or television shows, our tour guide Ian provided us so much insight into the great detective. Our tour starts off at the restaurant where the story of Sherlock began. This is where Watson meets up with a friend and is enquiring about places where he could find a flatmate. Thus, the beginning of Sherlock and Watson's friendship. Over the course of the tour, we were shown different parts of the city where the multiple film adaptations and BBC show were filmed. Ian gave us accompanying photos to help visualize some of the film locations of the film. And of course, we were able to see the publishing house where the work of Sir Arthur Conan Doyle's writing was distributed throughout the world. A few fun notable stops was outside the Sherlock Holmes-themed pub, which features a floor of historical Sherlock Holmes props and materials from the character's history through different mediums. Also, we stood outside the playhouse in which the first play production of the character was portrayed and how this specific run led to the image of what we view Holmes as now. Ian also provided us some history of the city as we walked by several notable monuments. That was an added bonus as we walked through different parts of London. This was a treat for me and my wife as we saw Sherlock's imprint into the fabric of the city. It's a definite must for any fan of Sherlock Holmes.

star star star star star
An excellent tour given by Fiona. A lot of good information well given. Helped by a photo flip book that Fiona used to show us scenes from the films and t.v program. It could be quite a fast paced at times in order to get all the venues seen. I would certainly recommend this tour to others.

star star star star star
Jenny was the best! Great experience for a big Sherlockfan and a first-time London-visitor! Not the most cliche locations, but the ones that make you go like oh yeah! Cool! And have you get to know London as well.
Previous Next
keyboard_arrow_up