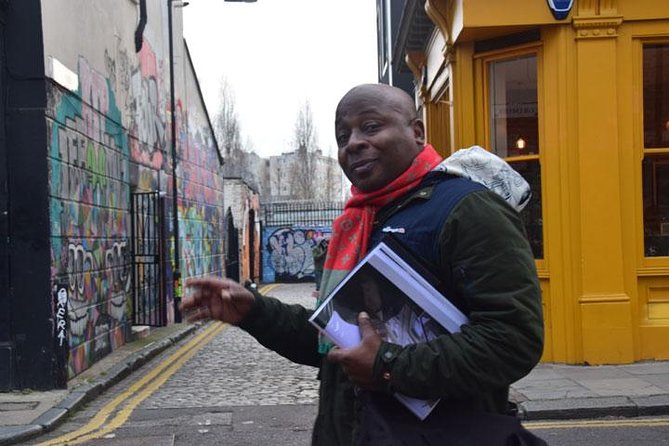 Learn about the godfathers of British crime on a 2-hour walking tour of London’s East End, led by ‘Lock, Stock and Two Smoking Barrels’ actor Vas Blackwood! Vas is instantly recognizable as on-screen gangster Rory Breaker, having a wealth of knowledge about the villains (both on-screen and real) involved in London’s murky underworld. Hear tales of the notorious Kray twins while visiting sites around Whitechapel and the East End that are linked to them, and see iconic film locations from ‘Lock, Stock and Two Smoking Barrels.’

INR 2,107
p.p. onwards
Itinerary
This is a typical itinerary for this product

Meet your guide – Vas Blackwood (famous for playing Rory Breaker in Lock Stock and Two Smoking Barrels as well as Only Fools and Horses in which he played the robber Lennox 'Shadow' Gilbey) - in Whitechapel, the gritty heart of London’s East End. Then set off on your 2-hour walking tour of the area, visiting film and TV program locations as well as real-life places associated with London’s criminal underworld.

Famously the stomping ground of the Kray twins (Ronnie and Reggie) who terrorized the East End during the 1950s and 60s, the area is rich with sites linked to them. Pay a visit to Repton Boys’ Club, where the twins learned to box, and see the Blind Beggar pub, where Ronnie killed an arch rival – one of the ruthless acts that propelled him from mere gangster into an East End celebrity icon (albeit a feared one).

Having rubbed shoulders with many of London’s ex-gangsters to prepare for his role in Lock, Stock and Two Smoking Barrels, Vas Blackwood has countless tales to tell, and you’ll hear the best as you walk from site to site. Learn about ‘The Guv’nor,’ Lenny McLean, a gangster-turned-good guy who started his criminal resume as a bareknuckle fighter before going on to act in popular UK TV programs, like Eastenders and The Bill.

star star star star star
What a knowledgeable tour! Vas Blackwood was great enthusiastic and kept us entertained throughout. Lovely to hear about all the people connected to the Krays. Also to be on their stomping grounds! We had drinks at the start and end of the tour. Personally didn't rate the Cornershop bar at the end apart from that fantastic!!! Thank you Vas.

star star star star star
Meeting Vas he was a lovely man with a great sense of humour and his knowledge was good of the Krays and associates. Definitely would recommend to friends and family.

star star star star star
I purchased this for Christmas for my husband. This didn’t disappoint we loved it. Vas our tour host was blooming brilliant, funny and an all round lovely bloke.

star star star star star
What can I say this was an absolutely amazing experience, our tour guide was the one and only Vas Blackwood and although a legend in his own right he was a different level as a tour guide. His knowledge,enthusiasm and comedy element was almost hypnotic as you couldn't fail to listen and take in every word he spoke. The tour covered locations directly linked to the Krays and some from Lock stock and two smoking barrels. I honestly can't speak highly enough of this tour.

star star star star star
Amazing, book it asap, Vas Blackwood perfect man for the job, very informative, loads of banter, and all round friendly guy, great gift for my fiancé who is incredibly hard to buy for, we had a fantastic time.

star star star star star
Absolutely amazing experience! Vas was down to earth, engaging, informative and hilarious! 2 hours of laughter and interesting stories from a proper Eastender who showed respect for the local area and the history of the Krays. Thoroughly recommend it and can’t wait to do it again!

star star star star star
A fascinating tour of the east end of London where the tour leader Vas went into great detail of his subject. He was funny and extremely knowledgeable about the infamous kray twins, answering questions and taking us to various points of interesting history. We loved every moment and it was well worth the cost. Our daughter had flown in from Delhi that morning as she’s cabin crew and she also found it to be thoroughly enjoyable; despite her jet lag! The tour encompasses around 4 miles in total, covering really specific points of interest including The boxing club, the church where their funerals were held and the infamous Columbia Road flower market, a place we had not previously visited. We loved it that much we returned the following day to see the flower market in full flow which was also a fantastic experience. Would not hesitate to recommend this guy, he is so very talented x

star star star star star
This tour is amazing, interesting, informative and funny but above all interactive. Vas Blackmore may be an actor but he is also the perfect tour guide. He was so knowledgeable about the Kray twins but also about the area. He presented it all in such a way that you were completely immersed learning about the twins and other characters and events of that era and at the same time we barely stopped laughing. His interaction with the group was just classic and totally hilarious. I remember reading somewhere that it is an adult only tour and as soon as Vas opened his mouth, you understood why. I don't think all the ladies had read the small print but there is always a time and a place for this kind of thing and this was definitely it. Would definitely recommend this tour. Vas Blackmore, you should be a national treasure !

star star star star star
Absolutely loved the gangster tour & would recommend to friends & family! Vas was very knowledgeable & engaging with everyone. He was also really funny & the tour wouldn’t have been the same without him!!

star star star star star
The whole tour was engaging from start to finish. This is the second time we have been in the tour and would recommend it to everyone. Vas was brilliant!
Previous Next
keyboard_arrow_up