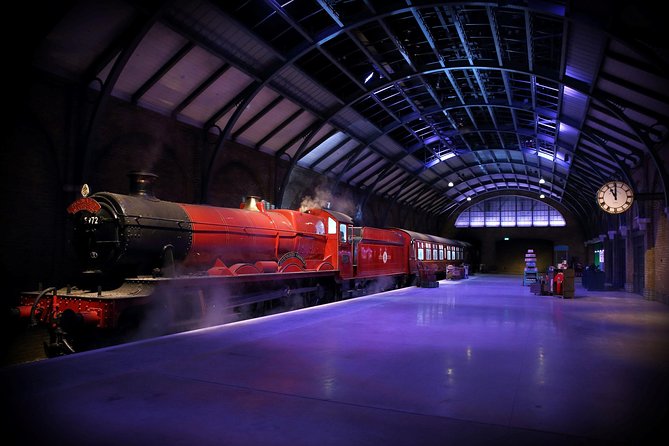 Experience the magic world of Harry Potter with your visit to Warner Bros. Studio London - The Making of Harry Potter. Explore the studio, which is home to several of the locations used in the famous film franchise. Then, head to historic Oxford and take a small-group walking tour (maximum of 20). Visit the 15th century School of Divinity that was used for infirmary at Hogwarts. This tour includes all entrance fees, guide, and round-trip transportation by an air-conditioned mini-coach.

INR 12,019
p.p. onwards
Itinerary
This is a typical itinerary for this product

Prepare to enter the magic world that awaits on the Warner Bros. Studio London – The Making of Harry Potter tour. You will experience the magic that has gone into the creation of one of the most beloved franchises of all-time, Harry Potter. See the studio where all eight movies were filmed.

Begin your 4 hour studio tour by entering the Great Hall of Hogwarts, instantly you are catapulted into the wizarding world. Then, continue on to Dumbledore's office, the Ministry of Magic, 4 Privet Drive, the Gryffindor common room, the Weasley kitchen, Hagrid's Hut, and Diagon Alley. Step onto the Hogwarts Express and sit down in the carriages as Hogwarts Castle steams away at the end of platform 9 3/4 . Discover behind-the-scenes secrets, and see the intricate prosthetic and makeup work that transformed actors into amazing creatures.

We depart the studios and continue the day with a visit to Oxford to visit the historic town and its famous University founded in 1167. Its connections to the world of literature are wide and varied, with links to Lord of the Rings, Alice in Wonderland and The Chronicles of Narnia to name but three. Authors, poets, actors, inventors and statesmen have all called Oxford their home.

Join your guide for a 90-minute walking tour of this famous university city. Admire the beautiful architecture and serene landscape of England's oldest university, founded in 1167. Then, you will be treated to an interior tour of the 15th century School of Divinity, the highlight of your time in Oxford. Admire the vaulted ceiling with 455 roof carvings of the benefactor's crests and initials. Go on to see Christ Church, Corpus Christi, Magdalen, All Souls, Hertford, Trinity, and St. John's. Spend some free time to continue exploring the grounds or to shop at your leisure.

Pass by on walking tour

star star star star star
This tour was absolutely phenomenal. Better than I could have imagined. Ben, the tour guide for the bus was great. He was very knowledgeable and very friendly. I would love to go on another tour with him leading! The tour guide that met up with us in Oxford (Debbie) was also great! I wish they would be on all tours! VERY worth the price! Spectacular day. There was unexpected crazy weather, and even in spite of this, I would have gone on this particular tour with these particular guides again! Also, the photos attached are only a glimpse. This is a must for any Harry Potter fan of an level.

star star star star star
Despite not being a big fan of Harry Potter, it was an amazing experience. Our guide, Edward, was very professional and enlightened us about Oxford history, and how the culture and history of England help create an imaginarium called Harry Potter. And the Warner Brother studios are most definitely a must. Huge production, and an inspiring philosophy of work. Price/quality well balanced. I absolutely recommend it.

Booked this tour since the family was interested in seeing the Harry Potter tour and overall it was okay. Pickup was on-time, however, some others in the group were not notified of the later pickup time so they waited an additional hour. Unlike the description here, the tour contained more than 9 people and we were transported in a mini-bus. The mini-bus itself did not seem to have a functional AC, so we were all kept warm in the bus, though the fans themselves were working. When you arrive to the studio/tour for Harry Potter, the tour guide leaves since it is self-guided. They give you a good amount of time to go through and see everything and grab a bite to eat at the studio and do some gift shopping. Afterwards, they take you to Oxford and give a small walking tour followed by an hour of free time to see the sites. Oxford itself was a really nice town with a lot of small shops an hour isn't enough to explore the whole town since it is fairly large, but it is enough to give thoughts about returning to see what else is around. Our tour guide was pretty great he was knowledgable in the area of Harry Potter and Oxford and was accommodating to the needs of the group and tried to talk to the driver to fix the air. Overall, this tour is okay, for the most part, you are paying for is the transportation and the entrance fees.

star star star star
We went on this tour on a Saturday, so we went to Warner studios first and then we went to Oxford in the afternoon. It was a medium size group, I think we were around 15 people. A tour like this one is good if you have a tight schedule because you can see both locations in one day, but if I had the chance I'd rather go by myself so I can spend more time in Warner studios. Once we got there, the guide gave us the ticket but still we had to join a long cue to get in (it is quick, but still needs time). The visit to Warner studios is free-range, the guide doesn't get in. Still you need a minimum of 3.5 hours. We stayed in the shop (amazing shop) for almost one hour, so we had to rush a little bit for the visit (if you take the audio-guides and you stop at every point, you will not have time for eating or shopping then). The studio visit was great! It is REALLY WORTH IT. There is a cafeteria where we could have a drink and something to eat but after the cafeteria you still have quite a long way to go before it ends. Then we had around one more hour drive to Oxford. Once in Oxford, we had a walking tour where the guide explained some history and some anecdotes, but the filming locations of Harry Potter are indoors, so you can only go in during your free time. We had like 2.5 hours free in Oxford, which was enough for us because we did not go inside any of the buildings. However, Oxford is a beautiful town and it is worth a visit. The driving was safe and both the drived and the guide were very kind. We left London at 9am and arrived back at around 20pm. It is a long day.

star star
We did this tour on a Sunday. So the tour went to Oxford in the morning and to Watford to the WB studios in the afternoon. ( They apparently do it the other way round on other days) We had two problems: 1. Apparently another guide who is the Oxford expert was to have met us at Oxford but he couldn't make it apparently. So the bus guide had to step in for him. While I do not wish to blame him and he tried hard; could International Friends not have found another Oxford expert? Am sure we would have had a much better session in Oxford with a guide who really knows the place. The objective of the trip is not to just take us to the town of Oxford and leave us there to our own devices. 2. Christ church ( the college that has the famous dining room that inspired the Hogwarts one and the easily the largest and perhaps most worth visiting of the colleges in Oxford) opened its doors to visitors only at 2pm. And we were asked to report back to the bus at 245 pm. This meant navigating the long queue, buying tickets and seeing what needs to be seen and running back to the busparking lot ( which takes 10 minutes) in 45 minutes. I think this is REALLY BAD planning. Am sure International Friends knows what timings Christ church allows visitors in. Then why was the day planned with the oxford session ending at 245 pm? When we travel miles to a new country on holiday and are unlikely to see Oxford again in our lifetimes and pay fairly large sums of money for tours like these; I don't think what happened was fair.

An excellent trip. Warner Bros Studio London is quite hard to get to, so it simplified things going on a tour and having a bus take you there. By the time we got our ticket and got into the studio we only had just over 3 hours, which was a little bit short, as we did need to rush at the end, didn't have time to eat during the visit tricky if you are there with children and we had to constantly keep track of the time. I think 4 hours in the actual studio would have been better. The studio itself is fantastic and we really enjoyed the visit. The walking tour and time in Oxford was excellent - the tour guide was very informative, friendly and helpful. A long day, but would highly recommend this combined tour.

star star star star star
Amazing tour, fantastic communication, driver was punctual and very polite. Highly recommend this company, will def use them in the future. 5*****

star star star star star
Amazing trip with great guide Amber and driver. The tour in Oxford was great. Great stories in the bus and on the walk. Warner bros Harry Potter was amazing.

star star star
My family recently took the Small Group Oxford and Harry Potter tour. Our tour was on time, and Rob our guide was very nice and knowledgeable. We had a nice tour of Oxford and hope to go back and explore more in the future. The Harry Potter Studios tour was excellent. We even had some extra time as we go there early. The only negative I can say was the bus ride. It was one of the hottest days in England in recent history and the AC on the bus was not functioning. We were told the AC was working but it could not keep up with the heat. It really just felt like the fan was the only thing working. Needless to say it was very hot in the bus on the way back to the city. This probably is an exception as it is usually not that hot in England, but I hope the company can ensure the buses are properly functioning prior to the journey. Otherwise, the tour was as advertised and expected.
Previous Next
keyboard_arrow_up