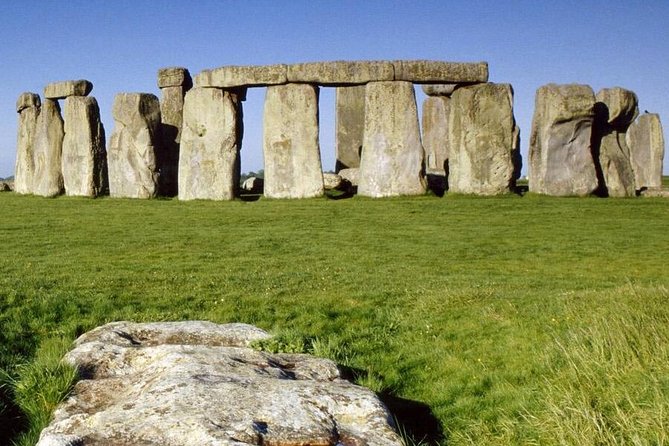 Small-Group Day Trip to Stonehenge, Glastonbury, and Avebury from London

If you’re fascinated by England’s mysteries, from the legends of King Arthur and the mystical island of Avalon to the ancient stone circles in the former Kingdom of Wessex, then this day trip from London to Stonehenge, Glastonbury, and Avebury was made for you! On this small-group tour, enjoy the English countryside, see some of its most legendary attractions including the Glastonbury Tor and the Chalice Well, and let a friendly guide fill you in on the folklore that surrounds these incredible sites.

INR 12,019
p.p. onwards
Itinerary
This is a typical itinerary for this product

Your day begins with a visit to one of the most mysterious sites on Earth, that prehistoric and world-famous stone monument known as Stonehenge. The landscape is peppered with burial chambers and stone circles, each one thousands of years old and shrouded in mysteries, but Stonehenge rises above them all. Located on Salisbury Plain and keeping its 5,000 years of history quite secret, Stonehenge has been described as everything from an astronomical clock to a place of worship or burial. Your guide will explain what is known today and reveal the theories that have been debated for centuries. Ponder these theories as you walk around the stones and admire the scenic views.

Your tour continues to the small town of Glastonbury, supposed home of the mysterious isle of Avalon, the place where King Arthur’s sword was forged, according to legend. It was here, after the Battle of Camlann, that a mortally wounded King Arthur died. Stop at the famous Glastonbury Tor (a hill) and view the ruins of St Michael's church. Afterward, descend to the Chalice Well Gardens to learn of an older legend, that of the chalice that Jesus Christ used during the Last Supper. Some say the Holy Grail is buried here in Glastonbury. Continue into town to visit Glastonbury Abbey, the site of Arthur’s and Queen Guinevere's graves, before heading to lunch in one of the local restaurants (own expense).

Included in our tour of Glastonbury

Optional visit to the Tor

We end the day at the massive stone circles at Avebury, with it's village of thatched cottages ringed by huge standing stones hauled into place by Neolithic worshippers thousands of years ago. After a guided walk and free time you'll begin your journey back to London.

star star star
This rating has nothing to do with the driver/tour guide who was wonderful, but the whole trip. It is a very long day. Most of it driving. Stonehenge is wonderful. I understand why they add on other places since it is a good distance away, but you could just leave off the Avebury stop and spend more time in Glastonbury. I really wanted to stay there longer in fact all the people on the tour except 2 wanted to just stay there. The thing that really irritated me was the two who wanted to go on to Avebury (for the whole 30 mins stop) stayed on the tour van REALLY... This would have been a wonderful trip with just the two stops. I really felt rushed at the stops since the weather was horrible and the traffic was horrible and it was so long.

star star star star star
Our driver (Tony) was fantastic and very knowledgeable. A lot of time in vehicle but we loved all the sites. More time in Glastonbury would have been great.

star star star star star
We had the best day out ever! Tony was our awesome tour guide and since it was a small group I feel like we got a lot of information and opportunities that we would have missed in a larger group. Prepare yourself for a long day though and there is no way to spend quality time at most of the stops, just to much for one day. We all ended up agreeing to skip Avebury. We would have had to rush through Glastonbury and then drive way out of the way for Avebury and then tack another hour back at least. I would have loved to have gone there but was even happier spending more time in Glastonbury so it was a great choice. The Chalice Garden is the best. So peaceful and beautiful. A do not miss. We had the extra time to walk to the top of the Tor, which was amazing. I can not imagine stopping there and not walking up it. We even had time for a sit down lunch, which was needed. The very, very best part was that Tony knew of a pagan temple that we got to go in......by far the most amazing place ever!!! So glad we had Tony to let us sneak it in. Our driver was awesome and Tony kept us on track and on schedule and had a ton of interesting information. This was my favorite day trip ever. The meeting place was also easy to find. All in all, the best day trip ever.

star star star star star
I've always wanted to go to these amazing sites and I finally got the chance and what made it even more enjoyable was our lovely guide Jose ! He was very informative and funny as well his jokes were hilarious and he was very helpful ! The sites were fascinating! it was an incredible trip that I would definitely reccomend!

star star star star star
The best day trip available to get a taste of the magic of of this area. Guide and driver, Chrstine and Badger, excellent and accommodating. If you are interested in the mystery, legend and energy of this area, take this tour. Caution - it will leave you wanting another visit soon. Highly recommend!

star star star star star
Best way to get a taste of the magical, mystical Avalon. Guide and driver excellent and accommodating. Best day trip from London who want experience the energy of this amazing area.

star star star star star
We had a lovely time on this trip. Mike was a superb guide: very knowledgeable, kind, and funny. He really made our trip fun. Abdie, our driver, was also very competent and excellent. The tour packs a punch in a short amount of time and is well worth the money. It was a small group of ten people which was much nicer than a large group. It was also relaxing to be able to hop on and off the bus without having to worry about the logistics of driving ourselves, figuring out directions, etc. There wasn't a whole lot of time at any of the sites, however, this trip is great for anyone who may be pressed for time and/or is looking for a pleasant sampling of some of what England has to offer.

star star star star star
Exactly what I was hoping this trip would be! Just the right amount of facts and myths, plus Tony our guide was great at pointing out where mystical energy could be felt. Would 100% do this tour again! A+

star star star star star
Mike was our guide, & Tony was our driver. The tour leaves in front of the British Museum & dropoff at the Victoria subway station. Mike our tour guide is incredible— he is so knowledgeable, patient, and helpful. He was able to patiently answer all my questions about the sites. Before you even get to the site, he will tell everyone the historical background of the place. I am finally able to connect the dots on my blank spots of British history, and I have a better understanding of indigenous culture of Britain. Tony our driver was very very amusing! He’s a retired London city bus driver. He was able to get us to our destination not just quickly, but also in a very pleasant way. I was in other tours and I would feel sick / nauseous, but with Tony’s driving, it’s so sure and steady, I didn’t feel sick at all. I didn’t need to take any Gravol. I was so happy and able to just relax and enjoy the ride to all the historical sites for the day. I would recommend this tour for everybody, Mike & Tony are simply fantastic!

star star star star star
This tour was amazing! Andrew has such a wealth of knowledge! We learned so much and had such a great experience we will definitely be booking again. This is as close as we got to the Tor, even though the description of this tour says we will climb up and explore the Tor. We were extremely disappointed not to be able to do so. We were so rushed during our time at the Chalice Well that we couldn't get very many pictures. It's a shame that we didn't have time to appreciate the gardens and spring. Here I am finally at the amazing Glastonbury Abbey I love the plaque telling that 'the cross is a symbol of our faith, it marks a Christian Sanctuary so ancient that only legend can record its origin and quot; While we were absorbing the mysteries of Avebury a yellow Labrador decided to wallow in a drinking trough, certainly broke the spell I love the rays of light filtering through, making this seem more mystical here I am absorbing the mysteries all amazing - the walk up is amazing, sitting inside and reviewing the history is amazing and the view across the land is amazing, a natural iron-ore rich spring fills this pool - so peaceful