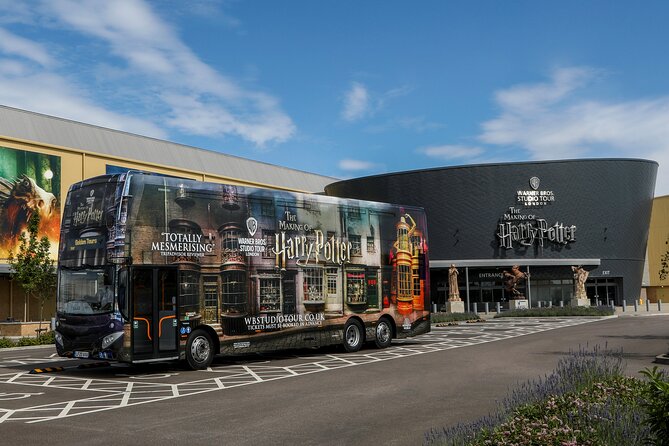 Warner Bros. Studio Tour London provides an amazing new opportunity to explore the magic of the Harry Potter™ films – the most successful film series of all time.

This unique tour takes you behind-the-scenes and showcases a huge array of beautiful sets, costumes and props. It also reveals some closely guarded secrets, including facts about the special effects and animatronics that made these films so hugely popular all over the world.

Highlights:
- Return transportation from Central London with branded buses
- Meet and greet service before departure
- Upon arrival at the Studio Tour customers will be welcomed by the supplier's representative
- Exclusive opportunity to watch one of the Harry Potter films during your journey to and from the Studio Tour (subject to availability)
- See the actual props, costumes and effects from the Harry Potter film series
- Hourly departures
- Begin your experience with an official introductory video
- Free Wi-Fi available

8:30am Departure 08:30
8:30am Depature: Warner Bros. Studio Tour London experience, departing from central London at 9am

INR 7,605
p.p. onwards
Itinerary
This is a typical itinerary for this product

Warner Bros. Studio Tour London provides an amazing new opportunity to explore the magic of the Harry Potter™ films – the most successful film series of all time. This unique walking tour takes you behind-the-scenes and showcases a huge array of beautiful sets, costumes and props.
Here are just some of the things you can expect to see and do:
• Enjoy watching the first Harry Potter movie on the journey to and from the studios.
• Step inside and discover the actual Great Hall.
• Explore Dumbledore’s office and discover never-before-seen treasures.
• Step onto the famous cobbles of Diagon Alley.
• See iconic props from the films, including Harry’s Nimbus 2000 and Hagrid’s motorcycle.
• Learn how creatures were brought to life with green screen effects, animatronics and life-sized models.
• Rediscover other memorable sets from the film series.

star star star star
This tour is all about transportation and admission. They managed to make it happen efficiently and they were also ponctual.

star star star star
Was very nice for kids and adults, we enjoyed the props and the people were very kind and helpful. Must do for Harry Potter fans.

star
Harry Potter Studios excellent, tour bus company very disappointing. Poor map directions provided, lack of decent signposting meant people were confused and queuing for wrong tours. On boarding, the staff handed us a wristband and earphones, and no further welcome nor information was provided, until we arrived at the studio doors and hour later. The earphones (one use, throwaway ones so a waste) were to connect to seat screens, of which we had to guess their use and then find the audible quality poor anyway. How disappointing for young children boarding the big HP bus, to find nothing but silence and confusion. Waste of money, and would make our own way to the studios next time.

star
We bought four tickets for this tour (cost was about $400). We waited at the correct bus stop at the correct time (11:30 am), but the bus never arrived. A Golden Tour rep told us when we called that the bus had been canceled. We had received no notification of this cancelation. (I double checked). So we scrambled to find public transportation out to Warner Bros. We contacted Golden Tours 3 times over the next month via email and phone to attempt to get refunded for the transportation portion of the tour, but no one ever responded to resolve this. So we paid a lot of money for nothing, and had to pay additional money for public transit on our own.

star
Despicable service. I purchased a Golden Tours with private transportation for the Harry Potter Studio Tour only because tour tickets were sold out through the studio. Decided to pay a little extra for private car to pick us up after verifying we could extend the time at the studio. I communicated numerous times with the Reservations Team about this, requesting pick up at 5:30 instead of 3:30. However, while my family was still on the tour, the company called me saying I had not made other arrangements and they needed to send the driver away, abandoning us there. I called them back, and they hung up on me after I asked where the breakdown in communicated occurred. It took me an hour to search for the emails, which I found and sent to them. I called them back. They shouted at me and said they had recorded the call and would pull up the recording, which I welcomed, knowing they were in the wrong. They put me on hold to find the email I had just sent. After that, they came back on the line and 'apologized' and said I could take one of their buses back to London, as they could no longer arrange another car. There was no compensation for my family's cost to get from Victoria Station to our flat. I payed over $500 for the tickets and transportation and did not get a ride back. They suggested I contact Customer Service, which I have done with no response. Despicable service.

star
I ordered a private transportation from the hotel and back it cost us 618 pounds including entering the studio. In the the beginnings everything was ok -they came on time 15:30 But when the driver dropped up in the studios he explained us that the driver back will be on 21:30 . So immediately we called the taxi company and asked them to earlier the transportation back to 1900 because the tour takes the maximum 2h . The taxi company told us that their contract with golden tour is 6h pick up !!! The confirmation paper that we got was 4.5h it means 20:00 but none of them care about us. After many phone calls with the taxi company and golden tour I understood the system- they know that you will never wait for 2.5h doing nothing with 4 kids and you will pay extra to get back and this is their profit on the customer So don’t let them cheat you and try other company- one you can trust and reliable and not Golden tour !!!

star star star star
After lot of reviews, which I read we was very surprised. Everything was like it should. Maybe one problem was, that in the driver did not called in advance. I think, that for better experience it would be good if golden tours make better schedule for the tour. And more about when we should go out from the studio. We go through everything in the exposition and we had butterbeer and some cheesecake. If we would know exactly when we need to get out, we would probably have some hot meal.

star
We, a family of 2 adults and 2 children booked the "Activity code: WBS" from Golden Tours - which are the Studio tickets with private transfer from Hotel downtown London. To make the transport more enjoyable, we opted for the executive transfer which clearly states: (E-Class Mercedes / 5 Series BMW). We were picked up in an old Jaguar, but the driver made it up for the quite old car and we made it to the studios in time (10:00). We were notified that the same driver would pick us up at 14:30! At 14:25 we exited the Studios (once you leave you can't get in again and are forced to wait outside. We had pretty bad weather (rain and quite windy) - so standing there with 2 kids, not much clothes (had expected door to door transfer) and waiting and waiting and nothing happening - after 15 minutes we called our driver (he had called us in the morning, so had his number) - and he told us that he got another trip, so somebody else would pick us up. Following this I called the Golden Tours main office explaining the situation, and they told us that driver was 5 minutes away from us and more or less hang up on us. 20 minutes later there was still no driver (we were deadcold at that point so I called them again) - again promise that driver was on his way - and after further 15 minutes a regular UBER driver driving an Electric Hyundai Kona showed up - we could barely fit in the car but we were desparate so we jumped in heading back! My take from this is: - Just because of their poor rude customer service and lack in service I will NOT consider them again. - Executive transfer is a complete scam - we could have booked transfer ourselves. I will ask for partly refund for the transport as they clearly did not deliver on this. Even the driver stated that his car was just a plain Uber and by no means premium in any way - he had just dropped off someone else at the Studios - which I guess was our luck!

star
Bus arrived late at stop. We had arrived 20mins early to bus stop. Even though we had arrived first to the bus stop, we were the last able to board (if you're the first person to the stop, you should get on the bus first, bus standards). Once we got on the bus we found that there were no available seats with movies on the back even though we paid for it. The people who had movies weren't using them. My child was left out of boredom, staring at the ceiling for an hour. Once we arrived, we arrived an hour before we were supposed too. We were stopped at the entrance and turned away and told to "come back later" because the bus had arrived an hour before the designated time slot. Where were we supposed to go? The bus coming back was worse. It was late again and this time we were sure to be at the front of the line. The bus was HOT, the AC was broken so we were stuck for an hour in hotness. We arrived at a stop (supposedly ours) and there was no notification to anyone to get off, so no one did. We never went to the stop where we got on the bus. We continued and ended up at the end of the line, which was the next stop. We went and asked the driver if we had missed our stop and the driver said "uh yeah" and that was it. There was no "oh let me help you get back" or instructions on how to get back. The bus driver was super snarky. We were left to take the Tube, paying MORE money to get back to our place. Overall, we were not happy with our bus.