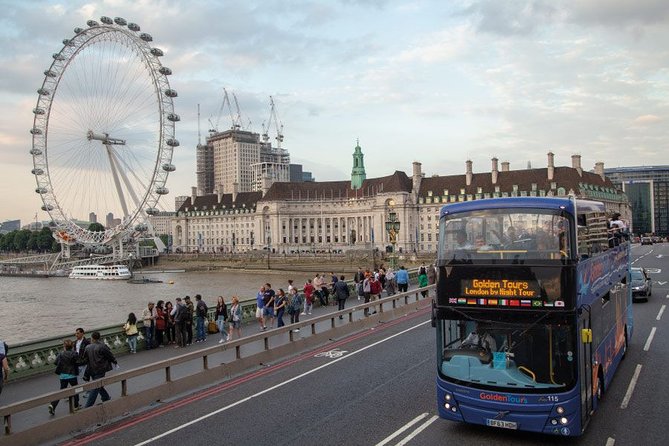 Remarkable London by Night Tour! This London by Night tour will reveal the floodlit splendour of London’s landmarks as dusk falls. When twilight descends upon London, the attractions of the city become imbued with a certain grandeur.

This sweeping, wide–ranging tour will encompass the most distinguished and vibrant areas of this world renowned capital, including Parliament Square, Trafalgar Square, Piccadilly Circus and the financial district of the City.

The tour also glides past eminent structures and attractions such as the world renowned London Eye, St Paul’s Cathedral, inimitable Buckingham Palace, the formidable Tower of London, Big Ben and the Houses of Parliament.

Embark upon this tour and discover the extraordinary allure of London at dusk.

INR 1,873
p.p. onwards
Itinerary
This is a typical itinerary for this product

The tour will start at London Eye, Belvedere Road, Tourist bus stop, London, SE1 7GH (nearest tube station is Waterloo, 2 minute walk) where you will board an open top bus tour to see some of London’s most famous sights as dusk falls.

star star star star star
A friend and I are here visiting London for the first time. We took the nighttime open bus London Sites tour guided by Emma, it was wonderful. Emma was so delightful as a guide. She truly knows her stuff about the history and sites of London and the surrounding Burroughs. It was a pleasure. Review for tour guide Emma.

star star star star star
Had a great nighttime bus tour with these folks! Emma our tour guide (with Dave, the driver) did a fantastic job showing my family and myself the sights. My only regret is that I waited until our last night to do this tour... was introduced a lot of cool spots, that we had overlooked. Next time I guess.

star star star star star
This was a wonderful tour and we learned so much! And how cool to see the city at night. This is a great experience for anyone visiting London for the first time like us. Emma was our tour guide and she was fantastic. She really knew her stuff! Highly recommend this tour!

star star star star star
My first trip to London and I had a short amount of free time. Decided to take the night tour. Emma was our guide and she was simply amazing. Coming to London has been on the bucket list and Emma made the experience a dream come true. Highly recommend!

star star star star star
This was a really great way to spend our first night in London! Matthew was very knowledgeable and had a great sense of humor. He made the tour really enjoyable.

star star star star star
With most museums closing early, this is a great way to spend a night at London. the views are great, you get to see the touristic places but also learn a lot about London with the help of the great team: Emma and Dave gave me a great Friday night!

star star star star star
Emma and Zara were amazing, Zara was a very safe driver and Emma was very knowledgeable about all things on the tour, all in all a 20+

star
This tour is a complete fraud. First the tickets are expensive but because they offered guide in many languages, Hindi being one of them I took it for my parents. Once boarded, I asked them to give earbuds so we can connect and hear it in Hindi, the guide was EXTREMELY RUDE and refused to give them and asked me to get it myself from the driver(IF HE HAS ANY), fortunately he had them. But they wouldn’t work. I complaint about it to the guide, she told me it’s not her job and she has no idea why it’s not working. I called the customer care, they asked me to write a mail as they can’t do anything on call.. I did write a mail, but they haven’t responded and it’s been more than a month. I WASTED £78 ON A TRIP BASED ON A FALSE AND FRAUDULENT ADVERTISING.

star star star star star
Excellent tour by Royston and David! Didn’t miss a thing! We saw all the highlights and learned new and interesting tidbits that we would never have learned on our own.

star star star star star
We booked this evening tour on a whim our first night, and it ended up being one of our favorite things we did in the short time we had in London! A great way to see the city from up above the streets, while whizzing by the nightlife. But what set this tour apart was Emma our guide, she made our experience spectacular. She infused the tour with historical tidbits, personal stories, and the perfect amount of humor. Her knowledge and love for London was evident. Can't sing her praises enough, this is my first TripAdvisor review just to give her a well deserved shout-out along with our awesome driver (I have forgotten his name but it was the 7pm on 9/28/22). Would definitely recommend checking out this tour early on in your trip, you will discover so many cool places you'll want to check out!
Previous Next
keyboard_arrow_up