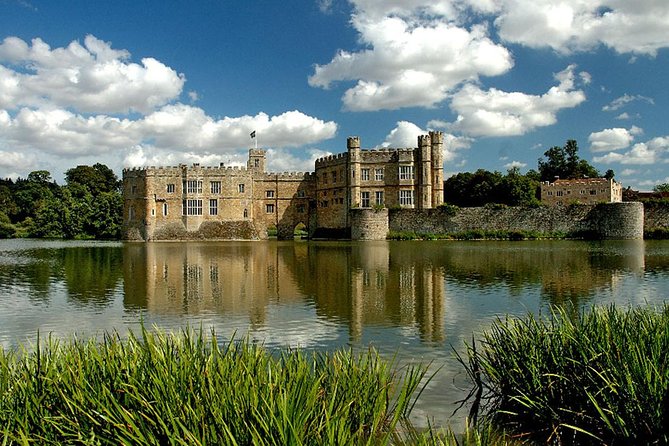 A fun-filled day of British history, scenery and aquatic adventure, take this luxury coach trip to Leeds Castle, Canterbury, Dover and Greenwich. Begin with a private guided tour of Leeds Castle, once home to Henry VIII and Catherine of Aragon, before visiting the city of Canterbury where you’ll see the oldest cathedral in England. Afterwards, head to the coastline to the famous White Cliffs of Dover before traveling back to London’s Greenwich, a place filled with maritime history. Finish with a sightseeing boat ride on the River Thames.

INR 7,251
p.p. onwards
Itinerary
This is a typical itinerary for this product

Described as 'the loveliest castle in the world' by Lord Conway, Leeds Castle sits in 500 acres of landscaped parkland across two idyllic islands, deep in the heart of the magnificent Kent countryside. Early arrival ensures an almost private visit of Leeds Castle, where Henry VIII retreated to escape the plague raging in London during his reign.

Visit the gateway to England and admire the famous White Cliffs of Dover, with a photo stop on the stunning stretch of coastline that faces continental Europe.

Located in Dover, Kent, Dover Castle is a commanding medieval fortress rising over the English Channel and a key film location in 'The Other Boleyn Girl'.

Centre of English Christianity and home to a succession of 104 Archbishops since Augustine, Canterbury is a magnificent medieval city that’s a must for any history buff. Discover the scene of Archbishop Thomas Becket’s gruesome murder at Canterbury Cathedral in 1170. Learn the intriguing history behind this captivating masterpiece of medieval architecture. Marvel at the cathedral’s spectacular stained glass windows, many of which have survived from the late 12th and early 13th centuries.

The Cutty Sark is a clipper ship built in the United Kingdom in the 18th century.
A tea clipper, the Cutty Sark was built on the River Leven near Dumbarton in Scotland in 1869 for the Jock Willis Shipping Line. It was one of the last and fastest tea clippers ever built, having been built at the end of a long period of design development that had been halted when sailing ships were replaced by steam propulsion.

Founded in 1873, The Old Royal Naval College serves as the magnificent centrepiece of Maritime Greenwich, a UNESCO World Heritage Site in Greenwich, London, described as having "outstanding universal value" and being the "finest and most dramatically sited architectural and landscape ensemble in the British Isles" by the United Nations Educational, Scientific, and Cultural Organization (UNESCO).

Get a fresh perspective on London’s attractions with our River Thames boat ride from Greenwich to Embankment Pier, passing Tower Bridge and stunning St. Paul’s Cathedral along the route.

Estimated arrival time back in Embankment Pier, where the tour ends, is around 6.30pm

star star star star star
Peter and Mano were the perfect team. Moving us through quite a bit of history and fantastic scenery and buildings - not too fast and not too slow. Peter's knowledge is suberb and his stories added something extra to the tour. We were thoroughly entertained.

star star star star
Leeds castle was nice. It should be mentioned it was redesigned/decorated in the 1920s. We saw the Dover cliffs from maybe a mile away. No where near the cliffs - I mistakenly thought we’d be on top to feel the ocean breeze. Canterbury was self guided. Greenwich was a 30 second walk thru. No time to shop/browse. And the river cruise was much like a taxi service. Many stops. No tour info of what we’re looking at. Still don’t know what the egg shaped building is.

star star star star
I gave this a 4 because we saw amazing sights and it was well worth the money for the locations. The timing in each place was also perfect. However, our guide was not that good. He was somewhat abrupt and rude in demeanor. He also complained about being overworked (we were with Golden tours on Wednesday 9/28). He gave some history and commentary, but as not much compared to other guided trips we have done. To give him credit, he was doing the tour bilingually which was seamless and impressive.

star star star star star
My husband and I had the BEST day on this specific tour! Our lead, Danxia, communicated excellent facts and information throughout the day. Our bus driver Ashley got us to each destination flawlessly and efficiently. We felt the drop off and meeting times at each stop were very appropriate. We experienced so much in a very organized schedule. Thank you Golden Tours UK + team! ☺️

star star star star star
I've always wanted to see a castle. I went the week of the queens funeral, which meant everything in the city was closed. After looking at tours I settled on this tour. The trip did not disappoint. After we went to Canterbury. The cathedral was amazing but I also managed to shop in the stores. Dove was nice to look at but that's all you did. I liked how it ended with a boat ride. Our tour guide was knowledgeable and entertaining. The driver was good too.

star star
If you don’t want a Spanish tour and English is your first language, go with a different tour operator. We didn’t sign up for Spanish, and it’s unfortunate that Golden Tours didn’t inform us that we’d be on a bilingual tour. Our guide Pablo doesn’t have enough time to cover both languages, and I t’s hard to understand his English at times. Also he spends a lot more time in Spanish vs English, so it felt a bit one sided. Great if you’re a Spanish speaker though! At both Dover and Leeds you’re very much left to your own devices. There was no guided tour at all so we were a little lost and didn’t get a sense of the culture of the stops. At least we were able to google information in the downtime between stops, and the stops were worthwhile. Bottom line: go with someone else if you’re looking for context and culture.

star star star star star
Great day tour if you want to see sights outside of London! Leeds castle was incredible, and Canterbury is a really neat town. Dover was quick but still neat to see, and the river boat ride back was a different way to travel. Danxia was an excellent tour guide, very knowledgeable and made the tour really fun! Ashley drive us everywhere so carefully and made great time. Thanks for a great experience!

star star star star star
Castle was great but Danxia made the entire trip worth it. 2 days later, took another excursion and couldn't find our bus. Saw Danxia and she took the time to take us to where the bus was - Outstanding guide and service!! Ashley was driver and also did a great job.

star star
Logistics were terrible. Handing out wristbands at last minute caused delays so it really cut into the time to look at anything. Tour guide rambling on with info at inoppertune times when it could have been done during the time on the bus. Location to view White Cliffs was quite disappointing. They actually drive by the side in town that has buildings against it and not the beachside view area. Guide was always telling everyone to be prompt and to keep moving because we didn’t have much time but yet she would gather us and talk for 15-20 min and pass out wristbands after we’d get off the bus at every stop. I think that should be done on the bus as we’re driving to the sites.

star star star star star
What an amazing adventure! I loved every minute of this trip. Our guide, Eileen, was so knowledgeable about the countryside and the history of the areas we visited. We were given plenty of opportunities to stop and explore. We could not have planned a better outing ourselves! This is a MUST for anyone wanting to see the city, countryside, and coast.