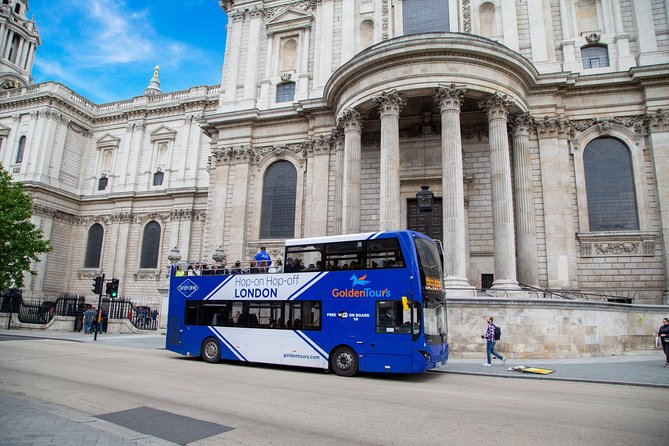 Sit back and relax as one of our well-ventilated open-top buses reconnects you with your favourite London landmarks. Glide past the Houses of Parliament, Buckingham Palace and Piccadilly Circus in this 2 hours fully guided tour of Central London.

This tour is not Hop-On Hop-Off and guests will be required to remain on the same bus for the duration of the tour. The buses will be running at reduced capacity and tickets will be sold in specific time slots to avoid overcrowding. Compulsory masks and gloves will be provided

Highlights:
• Panoramic 2 hours tour of London’s most remarkable regions and landmarks
• No need to print your tickets – E-tickets accepted!
• View such iconic structures as Buckingham Palace and Tower Bridge
• See celebrated areas of London including Trafalgar Square and Piccadilly
• Enjoy the insights and fascinating facts with a live English, or multilingual audio guided tour

INR 2,263
p.p. onwards
Itinerary
This is a typical itinerary for this product

The tour will start at London Eye, Belvedere Road, Tourist bus stop number 77, London, SE1 7GH (nearest tube station is Waterloo, 2 minute walk) where you will board an open top bus tour to see some of London’s most famous sights as dusk falls.

star
I paid about $70 for this tour and nobody asked for my ticket. It was a hop on hop off bus and I signed up for a 2 hour non stop tour. According to the tour company no such tour exists, I verified my viator information with them, I was at the correct place, they told me no such tour exists. Not sure why viator has this listed as a thing.

star star star star star
Fantastic experience on the guided open top bus with Dominic and Mark. Dominic was very knowledgable and funny and made the 2hr journey one to remember. Perfect for kids to see London. Highly recommend.

star star star star star
We really enjoyed the tour and the commentary by our guide Emma. She was interesting, funny and patient with some of the less polite customers on the bus. We found the stop easily, it was made clear where we could get off to visit the sites we were being told about, or to change to the other tour. There were headphones clearly available for audio in different languages. Perfect way to see the main London attractions.

star
Worst tour I ever experienced! First it was very difficult to locate their stops. The map wasn’t very clear on its locations. Our driver didn’t communicate with us the bus wouldn’t be stopping at Buckingham Palace. When I realized we had passed the location, I ran down to driver and he let us off only to have to walk half an hour to get there. The original driver didn’t offer us headphones so no audio. He also stopped & didn’t communicate it to us. We sat on the bus waiting unsure for how long. Definitely not worth the money or time spent. It was very disappointing!

star star star star
My son and I had a great time thanks to Laurence the tour guides informative and entertaining commentary.

star star
The trip was sold as an alternative to a hop-on, hop-off tour for 2 hrs. This is what we wanted. Upon arrival we were told there were only hop-on, hop-off busses. It was an hour and a half instead of 2 hrs with more than 10 min of that time at Victoria Station (not the origin of the tour). The live audio guide was literally unintelligible and spent an inordinate amount of time in private conversation thereby missing important points of interest and sites. Buckingham Palace was not visible from the tour. Not recommended.

star
We bought 48H tickets and waited several times over 40/45 minutes at the stop till the bus came. In the meantime we saw other hop on hop off busses come and go. Waist of time and money. At one point we didn’t even bothered waiting anymore and took the tube.

star star star star star
I am Londoner & my family came to visit me. Upon search we found this tour information. The open top bus with tour guide Emma plus warm weather was icing on cake. To see London's most iconic places with lot of inside / historic information was worth. As I said tour guide had all the answers to random questions ask by tourist. We had great time throughout. Must say all the team member few to mention, Driver Miguel, tour guide Emma and manager Akshay are credit to your company who Help us to make my family trip memorable. Thank you and we will recommend this to all in our contact.
Previous Next
keyboard_arrow_up