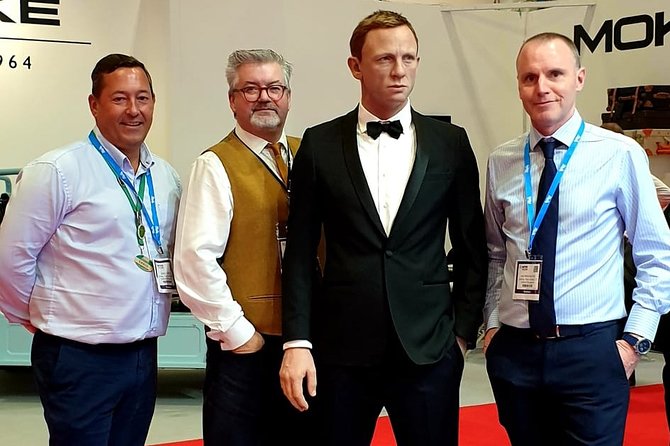 How would you like to be James Bond for a few hours, well now you can live your dream……

This tour is For your eyes only as you could Die another day so if the World is not enough you can always Skyfall your way down to Golden eye and ask The man with the golden gun to take you on this taxi tour.

INR 32,778
p.p. onwards
Itinerary
This is a typical itinerary for this product

“Shaken but not stirred" we will enter the world of James Bond. See Ian Flemings house, MI6, MI5. We shall visit James Bond film location sites all around town. We shall also find out about real spies and how they worked and where they met. This is a fun packed family friendly tour taking in the sites of London and the man himself James Bond.

See the shops where Bond had his shirts made, his cigarettes, and of course where he would buy his suits and hats. Not forgetting as a military man we shall see where his uniforms were made. Stand outside Blades Fencing Club, Le Circle Casino, The Hotel Europe, and lots more.

Real spies play a big part of this tour as well. We shall see drop zones and meeting places, homes and offices of spies that lived and worked around London. We shall see just how close film spies and real spies worked.

Did you know that St Petersburg Square were scenes in London? If this was not enough we will stop at the original Bar where the "Shaken not stirred" was first uttered. Besides all of this there is a wealth of Locations that we will stop at for photos and where your guide will explain from what Bond film they came from. We would tell you more, but it is a SECRET !!

You now can change direction should you wish as we can finish the tour at the Bond in Motion Exhibition. Here you can explore and see every Bond car and gadget. This is an option and the exhibition does have an entry charge.

DISCLAIMER: Any James Bond Tours operated by See More Taxi Tours Group are not official events and not endorsed, sanctioned or in any other way supported, directly or indirectly by EON Productions, MGM, United Artists or Danjaq or other studios connected with films featured on this tour, nor The James Bond book publishers or the estate of Ian Fleming. All rights to the series

star star star star star
Gordon was a great tour guide, very friendly and informative. We loved getting to see the sights in London (and he was kind enough to let us stop for a few non-Bond related pictures. It was great seeing the locations we remembered in movies, and can't wait to go home to see the rest again! Would definitely recommend to any Bond fan.

Gordon did a great job showing us around London..The Bond locations were a lot of fun but he also shared some non Bond gems with us. He was also open to taking us to specific film related sites my husband wanted to see. We had a great time.

star
Tour was cancelled due to Queens jubilee . Never got to go on the James Bond Shakespeare tour spy tour
Previous Next
keyboard_arrow_up