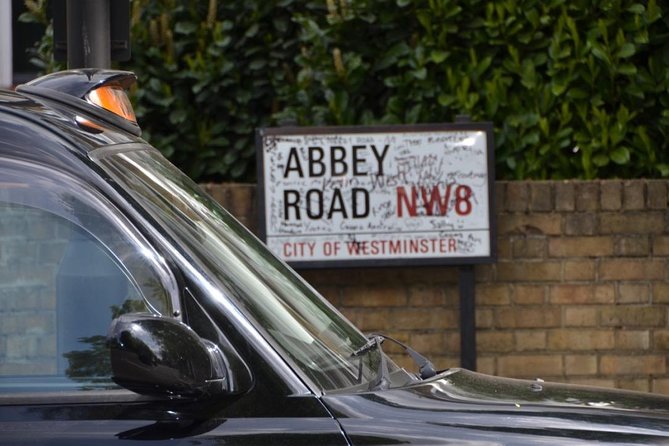 Take a trip back to the swinging sixties — when the Fab Four ruled the radio waves — on this 3-hour Beatles taxi tour in London. Travel through London by taxi as a guide plays music from the 1960s. (Singing along is a good option) Take in top sites of interest such as Abbey Road Studios, the Apple headquarters, and the place where John and Yoko met. Along the way, see where 'Hey Jude' and ‘I Wanna Hold your Hand’ were recorded. We won't be going "Back in the USSR" but following the Fab Four, John, George, Paul and Ringo seeing where they lived worked and played. Abbey Road, Paul's London house, John and Yoko's flat, Brian Epstein's home plus a lot lot more.
You have our "tick to ride" so we are going to "get back" to "yesterday" to see if "she loves you yeah yeah yeah" . This fun packed tour will please one and all. You would think that is enough but there is more, a lot more.
This 3-hour driving tour includes pickup and drop-off at your London hotel.

INR 28,798
p.p. onwards
Itinerary
This is a typical itinerary for this product

Visit the famous Abbey Road zebra crossing and so much more ...

A trip down memory lane to the swinging sixties and the Beatles, visiting the outside of Abbey Road Studios. We stop for photographs on that famous zebra crossing; Stand outside the house where Paul wrote "I wanna hold your hand", and view properties that the fab four owned and the places where they worked. See where John and Yoko met, Apple Headquarters, The rooftop Concert, The list of places goes on and on. Music of the era will be played and SUNG whilst on tour and your guide will have personal photos of The Fab Four and the 1960's era to show you.

So join in the fun of this MAGICAL HISTORY TOUR of The Beatles.

walk yourself over the famous crossing

The headquarters of the Beatles empire, where the very famous rooftop concert took place

View Locations that appeared in the Beatles films

London W1H 7DL, UK
Traveler pickup is offered
WePICK UP from ALL Central London Hotels in the following areas

star star star star star
Our Guide, Dave, picked up the four of us in his taxi cab at our hotel and away we went, reliving the London journey of John, Paul, George and Ringo. We visited 34 Montagu Square where John Lennon once lived and "I want to Hold Your Hand" was originally penned. We had our picture taken while crossing Abbey Road, signed 'The Wall' in front of the studio and shopped in the store next door. We stopped by Sir Paul's home @ 7 Cavendish Street, visited the Indica Gallery and dropped by "The Scotch." We visited where The Trident Sound Studio once was ("Hey Jude" was originally recorded there) and finished up where the Band's Final unannounced appearance in 1969 was held...Rooftop of the Apple Records Building. We came all the way from the USA to experience this tour. Thanks for the Wonderful Memories !!!

star star star star star
Had a great tour of Beatles sites in London, including the famous Abbey Road. Our driver/guide, Jason, was outstanding--he and my son really connected with their shared knowledge of the Beatles. Very informative, great music, a really pleasant tour.

star star star star star
We scheduled the Beatles Tour through Kensington tours. We had a black cab tour with Greg Smith. He was an amazing guide. Very knowledgeable and engaging! Highly recommend Greg Smith as the best guide ever!!!!

star star star star star
Our tour with Greg Smith today was amazing. We saw all the Beatles sites in addition to some additional city sites. Greg knows a lot of London history and shared amusing antidotes about the sites we saw. The icing on the cake was his taking the time to help us see the Queen in her carriage as she left the Parliament after giving the Queen’s Speech! You won’t be disappointed asking for Greg.

star star star star star
Excellent! Our guide was very knowledgeable and a great guy! Would recommend this tour to anyone who loves the Beatles, or just loves London.

star star star star star
I am from the US and took this private taxi tour. The tour was excellent, and our guide (Gary Boyd) was extremely knowledgeable and the kindest person I ever met in my life. When he found out my mom was from Liverpool, and is buried here, he went out of his way to bring us to the house she grew up in. I can’t say enough about the tour and Gary. Like my Aunt said, it felt as if we spent the day with family ❤️

Me and my wife loved every minute of the tour and had lots of new information of the Beatles and other music artists around that era . Our taxi driver Jason was a great host and full of information and a pleasure to be with. The tour was worth every penny. Thanks again Jason.

star star star star star
The Beatles Taxi Tour was a fantastic experience and went well beyond expectations. Simon was an awesome guide and extremely knowledgeable and personable. Highly recommended!
Previous Next
keyboard_arrow_up