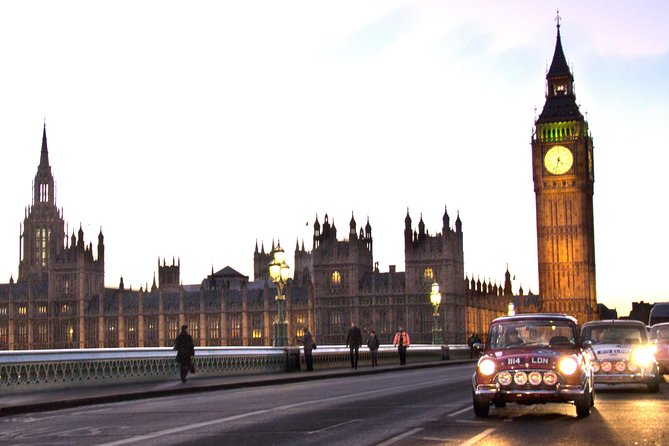 Private Tour of London's Landmarks in a Classic Car

London is a wonderfully busy metropolis. You cannot beat the hustle and bustle of a vast city. Our Landmarks of London Tour has been specifically designed for people who want to have a solid overview of the capital but do not have the time for an all-day excursion. We specialise in maximising your time, so you can cover as much ground as possible in the time given. We know which roads snarl-up with traffic and which roads keep on moving, so you can see as many landmarks as possible. You will be picked up in a beautifully restored classic Mini Cooper with your very own passionate local guide to take you around all of the landmarks that make up London’s iconic skyline.

What to expect to see on your Landmarks of London tour:

INR 18,719
p.p. onwards
Itinerary
This is a typical itinerary for this product

See where the centre of our government congregate

The historic centre of London

A royal palace since the 17th century

Where our monarch resides

star star star star star
When we booked the tour we were not sure what to expect. It was a really fun way to see the city and our favorite part was our guide who answered all our questions and showed us a great deal of the city in just 90 minutes. We'll definitely book again when my two daughters can tag along. They'll love it.

star star star star star
What a great way to see a city! As a MINI Cooper fan, I could not have been more happy. Ian arrived in Agnes, a British Racing Green MINI Cooper. For the next four hours, we had a thorough tour of London. Ian picked up on our interests and showed us what we wanted to see plus some unexpected places too. I had no idea that the oldest hat shop in the world was in London and let me tell you I LOVE hats. We poked in and ending going back there later. This tour is highly recommended!

star star star star star
Wow! Amazing experience with our guide and driver Jonathan. He is a wealth of knowledge and will take you all over London and to spots you would never see otherwise. He is not only a London expert (history, current events, trivia, Bond, Beatles), but an excellent and skilled driver!!! So much fun. This is a must do for a London visit.

star star star star star
Robert was our favorite tour guide while we were in London for the holidays. My two sons (17 & 14) joined me on this tour. He filled it with interesting sites/stories. It was exciting and insightful with some of the most interesting side spots that most tourists don’t get to experience. My older son really enjoyed talking about cars with Robert that day. It was one of the more memorable parts of our first trip to London and southern England.

star star star star star
We had the most amazing time on this tour, Tom was brilliant had shared so much knowledge of the city. We have been to London many a time, but this tour takes you to all the places you wouldn't always go to as a uk tourist!

star star star star star
Thank you so much. It was amazing fun interlaced with lots of interesting and memorable facts. Jamie our driver was extremely nice and an all round good bloke! We had an awesome hour and half and will recommend it to our friends in Australia!

star star star star star
Josh our knowledgeable and charming driver engaged with us the moment he collected us from our hotel. Our chariot was a cute 1992 Mini Cooper named Daisy that nimbly zipped through traffic on both sides of the Thames during our two hour tour. Highlight was rooftop views of St Paul's and a visit to the Globe Theatre and Tate Modern. Highly recommended.

star star star star star
The smallcarBIGCITY guys couldn't have been any better - lovely chaps, great tour, everyone had a huge amount of fun and have been raving about it ever since. A great family stag do for ages 10 to 73! There was one little hiccup in that one of the 8 cars we were in blew a fuse but this was dealt with perfectly and the guys even compensated us with a very welcome crate of beers which they didn't need to do but we appreciated very much. If you're thinking of doing this, think no longer just go ahead and BOOK :-)

star star star star star
Tommy and Stevie were great drivers and guides. They drove us by the landmarks but also to areas and neighborhoods of London that my family and I would not have otherwise seen. We ended up having them drop us off not back at our hotel but in Covent Garden which was like SOHO in NYC but on steroids. It was a memorable and exciting adventure we will never forget. Thanks Tommy and Stevie!
Previous Next
keyboard_arrow_up