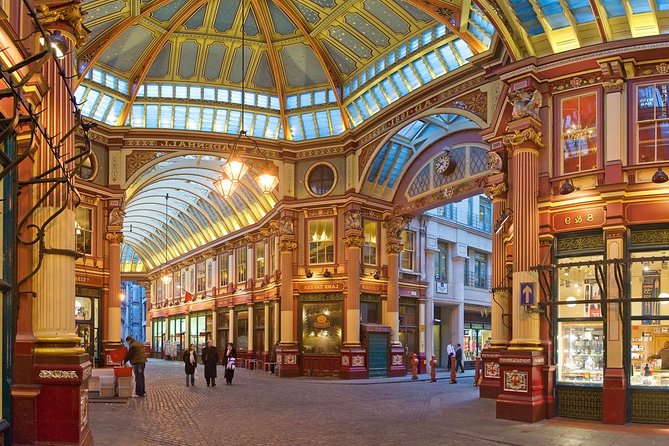 Become a Harry Potter character with the magical experience of this private guided walking tour though some of the movie's most significant places!

On this tour you will visit some of the most iconic locations where the movie was filmed and at the same time you will discover the beauty and magic of London! Using London public transport you will see:  Leicester Square, Trafalgar Square, Diagon Alley (Leadenhall Market), the Leaky Cauldron, Millennium Bridge, St. Paul’s Cathedral, the Ministry of Magic (Scotland Place), the London Eye and Platform 9¾.

The whole family will have a lot of fun!

NOTE: As you will use public transport (metro or bus) please make sure you have your Oyster card or travel card with you.

INR 12,298
p.p. onwards
Itinerary
This is a typical itinerary for this product

Choose between the morning or afternoon tour, whichever fits in best with your plans, and meet your child-friendly guide and Harry Potter expert in Piccadilly Circus next to the statue of Eros. This amazing journey of discovery will begin here, and will include some of the best known Harry Potter film locations.

This walking tour lasts for approximately 2.5 hours, and it constitutes a wonderful opportunity for families with children to see some of the most iconic buildings, streets and districts from which J.K. Rowling drew here inspiration, and which were included in the Harry Potter films.

Leicester Square is a famous pedestrianised square in London's West End and is famous for its theatres, eateries, nightclubs, bars and shops. There is always something going on in the square, but if all you feel like doing is relaxing after some extensive sightseeing, there is a garden area in the middle where you can take the weight off your feet under the watchful eyes of statues of William Shakespeare, Hogarth and Charlie Chaplin. Leicester Square is also home to one of the most celebrated and recognisable cinemas in the world, the Odeon, which has been the venue for the premieres of all the Harry Potter films.

Trafalgar Square is situated in the City of Westminster in the heart of London. Its name is a commemoration of Lord Nelson's victory for Britain at the Battle of Trafalgar in 1805, and it's one of London's iconic locations. Thanks to your kid-friendly guide, you will learn all about the most celebrated attractions in the square, including the National Gallery, Nelson's Column and the Trafalgar Square lions, as well as the fountains and statues. In the Harry Potter story, a small group of Death Eaters magically appear across Trafalgar Square on their way to Diagon Alley, where they kidnap Garrick Ollivander.

Leadenhall Market in the City of London was the location for Diagon Alley in Harry Potter and the Philosopher’s Stone. It is a beautiful Victorian covered market with an elaborately decorated roof, and it provided the film with the wizard-world shopping street. Hagrid and Harry take a stroll through the market before entering the Leaky Cauldron Pub through a blue door. Maybe you'll be able to spot it? Your guide, a Harry Potter enthusiast and expert in leading tours for families with kids, will use a range of stories and anecdotes to keep you and your children happy and entertained.

The Millennium Bridge, also known as the “Wobbly Bridge”, is a pedestrian-only bridge linking St Paul's Cathedral on the north bank of the Thames with the Tate Modern and Shakespeare's Globe on the south bank. It has become one of London's most recognisable landmarks and all Harry Potter fans will be able to identify it with the memorable opening scene of the film where Death Eaters are flying over London, obliterating everything in their way, the Millennium Bridge included. From here you can enjoy spectacular views of the city, which makes it a great place to stop and take some fantastic photographs.

London's public transport will take you to King's Cross Station, which is where students of Hogwarts School of Witchcraft and Wizardry catch the Hogwarts Express. The Hogwarts Express leaves from Platform 9¾ at King's Cross Station, and there is a secret entrance to the magical platform at the railing separating platforms 9 and 10! You will have the opportunity to visit some shops selling unique Potter-related items and souvenirs, and you and your family will be entertained by your guide who will expertly enhance the tour with visual aids, fun games and Harry Potter trivia along the way. You simply cannot finish this tour without having a photo taken as you push the luggage trolley embedded in the wall!That will be the end of the tour, but from here you can start your own magical journey with your imagination your only limit!

star star star star star
Tina did a fabulous job of keeping our girls engaged with questions, facts and videos. The tour was tailored to meet our families needs so we deviated a bit and Tina showed the girls some London historical sights too. It was a perfect tour to do after a 9 hour flight. Tina made London and Harry Potter come to life.

star star star star star
Tina did a wonderful job of engaging our girls in the wonders of all things Harry Potter and historical London. We took this tour just after we arrived in London the tour keep us invigorated and on the move. Thank you Tina for one of our best tours to date

star star star star star
Thoroughly enjoyed this tour and the guide. Locating the guide was a bit of a problem and after having been through getting ripped off by other viator vendors, I was skeptical. Perhaps someplace other than Picadillly as a meeting place would be better? Very knowledgeable and very fun once we found each other!

star star star star star
The tour guide was amazing and knew how to navigate the city with ease. Seeing the sights and locations of the movie locations was like a back stage pass. The entire family enjoyed the tour and we would recommend this tour.

star star star star star
Our 14 year old daughter, an avid HP fan, really loved this walking tour. Danny was not only well versed in all things Harry Potter, but was great at integrating other interesting London factoids as we navigated the tube and public bus system exploring all the HP film sites. My husband and I were unexpectedly entertained as well, since Danny used his iPad to show us the movie clips (admittedly, we dont have the HP knowledge that our daughter does). Great tour for any family with a Harry Potter fan (or muggle parental units).
Previous Next
keyboard_arrow_up