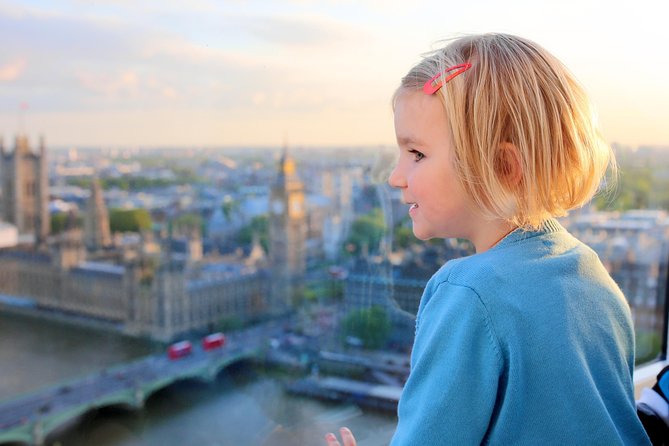 London for Kids with Changing of the Guard, Westminster Abbey, Tower of London

During this full day tour, led by a qualified Blue Badge Guide, you will discover all the main highlights of London, as well as going into Westminster Abbey and the Tower of London, two of the city's most famous landmarks.
Besides seeing some of London's best known attractions from outside, such as the Houses of Parliament, Buckingham Palace, the London Eye, St. Paul's Cathedral and many more iconic streets, palaces and squares, you will will also see the fascinating Changing of the Guards ceremony (takes place between August and May every Monday, Wednesday, Friday and Sunday and everyday in June and July). This tour is aimed at families with children, and your guide will make sure that everyone is entertained and engaged during the itinerary, sharing with you incredible facts and stories about the history of London.

London for Kids with Changing of the Guard, Westminster Abbey, Tower of London 09:00

INR 27,369
p.p. onwards
Itinerary
This is a typical itinerary for this product

You will meet your Blue Badge guide in Westminster, and from there you will start your walking tour to discover the history, culture and legends of one of Europe’s most famous cities.
This area hosts some of the most iconic attractions in London, and your guide will introduce your kids to some of the most important landmarks in this part of the city.

Big Ben is the nickname of the Great Bell of the clock tower (Elizabeth Tower) at the north end of the Palace of Westminster, though the name has also become synonymous with the tower itself. A light at the top of the tower is illuminated when Parliament is sitting at night.

You will take a stroll along Whitehall, a famous London street which houses some of the main government offices. From the outside you will see the area’s principal attractions, such as the Cenotaph war memorial, the Horse Guards Parade, Great Scotland Yard (the former home of the Metropolitan Police), and the Banqueting House (1619–22).

After a walk along The Mall, or a picturesque stroll through St James’s Park, you will reach Buckingham Palace. Here, if it is scheduled on that day, you will see the Changing of the Guards ceremony (if scheduled and weather permitting).
While you watch the ceremony, your guide will explain to you the importance of some the ceremony's finer details, such as the colours worn by the guards as well as the armour they wear.
The Changing the Guard takes place every Monday, Wednesday, Friday and Sunday, from August to April, and every day during the summer. However, the ceremony will be cancelled in the event of rain or adverse weather conditions, because, among other things, the rain could damage the guards' brass instruments). The ceremony can also be annulled without notice in case of major events. If this should happen, your guide will still be able to point out to you the guards protecting Buckingham Palace and in any case you will be able to witness the Horse Guard Parade.

You will then visit Westminster Abbey, one of the most famous religious buildings in the world, and one which has played an important role in British political, social and cultural affairs for more than 1,000 years.
This beautiful Gothic church is a UNESCO World Heritage Site, popular with many visitors to London. You will be fascinated by the paintings, stained glass windows and other religious artifacts present in this outstanding cathedral.
Visiting a church with children might sound challenging, but your kid-friendly expert guide will know how to keep your children focused and interested during the itinerary, ensuring this experience will be both educational and fun for all of you!
After visiting Westminster Abbey, it will be time to eat, and your guide will certainly recommend to you a restaurant or local pub where you can relax and enjoy a nice lunch before continuing with the rest of the tour.

The walking tour will continue towards Trafalgar Square. This famous square is a public space and tourist attraction in central London which commemorates the British victory, led by Admiral Lord Nelson, at the Battle of Trafalgar in 1805.
The centerpiece of Trafalgar Square is Nelson’s Column, guarded by four huge bronze lions sculpted by Sir Edwin Landseer in 1868.

Here in one of London's most popular attractions, you and your children will be enthralled by the fascinating tales and intriguing legends that your expert, kid-friendly guide will recount to you. One such legend has it that if the Tower's famous residents, the ravens, should ever leave, the Kingdom of England will fall. History will be brought to life as your guide shows you the places behind these stories, including many of the most important places in the castle, like the White Tower, the Medieval Tower, the Royal Mint, Tower Green, the Royal Menagerie, and the Bloody Tower.
One of the highlights of your visit is sure to be the Crown Jewels. A central part of the Royal Collection, they are the most powerful symbols of the British Monarchy and hold deep religious and cultural significance in the history of the United Kingdom.

star star star star star
This far surpassed my expectations: my kids are 12, 10 & 7 and we spent the day with our lovely local guide, Dan, from 9-5. It was a long, hot day but he kept us all really engaged, and we all learned some really fascinating facts! It was nice to be able to move at our own pace versus a group tour, take a break when needed, and spend more time at specific areas of interest, we also were able to adjust the itinerary a bit and skipped some things not of interest or that we had already seen, also being w a guide allows you to jump the long lines for entry to Westminster Abbey and the Tower. I would definitely recommend… we had sore feet and were tired at the end of the day but my kids have it 5 stars also!

star star star star star
Wow! We had the best day with Lucy our tour guide. It was a full day and a lot of walking and sightseeing, but we were so entertained, we barely noticed. We are a family of 5 and our youngest is 9. We toured Westminster Abbey, we watched part of the changing of guards ceremony and toured the Tower of London. Lucy not only gave us a tour of these amazing places she made it fun and she answered all our crazy questions. I would absolutely recommend this tour!
Previous Next
keyboard_arrow_up