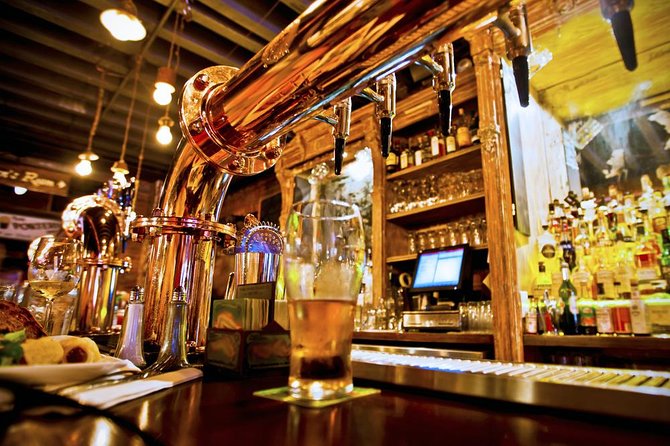 Check out London’s best ale houses on a 3-hour historical pub tour of the West End! Led by a friendly local guide, your tour visits five traditional pubs with beer samples included at each stop. Visit locals’ favorites at Trafalgar Square, Soho and Seven Dials – the epicenter of London’s theater scene -- and discover atmospheric pubs down blink-and-you'll-miss-it alleyways near Covent Garden. Hear the history and culture of beer in England, get tips on London's pub scene and enjoy drinking like a local!

Numbers are limited to 15 on this small-group tour, ensuring you’ll enjoy personalized attention from your guide.

HKD 667
p.p. onwards
Itinerary
This is a typical itinerary for this product

Meet your guide near Trafalgar Square in London, and then set off on your 3-hour pub tour of London’s West End.

Popular for centuries as the cultural heart of London, the West End is thronged with theaters, restaurants and galleries; no surprise then, that a thriving pub scene generated within it, and its historic pubs from bygone days are still every bit as popular today.

Start with a visit to a traditional 'boozer' near Trafalgar Square and soak up the ambiance of an authentic London ale house, serving beers, ales and ciders on tap.

As you relax inside, your guide will regale you with insider secrets about some of the monuments nearby, like Nelsons Column – the impressive structure in the center of Trafalgar Square.

After sampling some of the pubs hearty ales, continue your tour with a stroll to Covent Garden – one of London’s most beautiful squares, with a bustling marketplace in the center. Many visitors head straight for the tourist pubs here, but your guide will introduce you to two of the best local pubs, just hidden down side streets, away from the hustle and bustle. Enjoy a traditional snack inside one of them, and hear about the history and culture of beer drinking in the UK and Europe, as well as the ingredients used in different beers like hops and wheat.

Continue to the heart of London’s ‘theatreland’ in Soho and then head inside a pub that’s popular for pre-show drinks. Hear about the city's impressive performing arts and music scene in this world-famous theater district while sitting back and sipping on another ale.

Pass iconic London venues like the Adelphi and the Shaftsbury Theatre.

Your tour finishes at a pub in Seven Dials – the center point of London’s vibrant West End. Savor your last tipple of the tour and get recommendations about other great London pubs to visit independently!

star star star star star
My father and I are here from the States. We joined in on the pub tour with Danny Boy and had a beautiful time. He was incredibly personable with many great facts and stories to share!! Thank you Danny for a great experience while we were herein London. Much appreciated, Mary McMahon

star star star star
This was a great way to spend our first afternoon in London. Our guide was great with a brief history of each pub we visited. Just enough beer for me as we sampled at every location. Last location was a bit of food and it was great.

star star star star star
Interesting stories and history lesson. Who'd have thought there was so much to know about beer. The beers were varied and all very tasty. Our group was great fun and we all got on swimmingly. Our guide "Nick" was great and he regaled us with loads of interesting facts and stories. Really good day and a fantastic way to see some of London's quaint and historic pubs. Well done guys andbthank you for a great few hours.

star star star star star
Dan was a great guide. He not only knows the history of the city but also of the establishment that we went to. All the beers that he picked were fantastic. Really fun tour!!

star star star star star
We visit London regularly and fancied doing something a little different. Dan was waiting for us at the meeting point early and he was relaxed, fun and informative. The tour was very pleasant and not heavy on walking. The drinks and snacks were very nice, the last drink was a particularly delicious! I would definitely do another tour with this firm.

star star star star star
Nick, our tour guide was excellent. He was very knowledgeable about beer and pub culture. He took us to four different pubs where we were able to sample local beer. We explored the Covent Garden which was a unique experience. This was a really fun tour and I would highly recommend it.

star star star star star
Fantastic experience doing the pub tour in the West End! Our tour guide was a lot of fun and very informative. He had so many great stories to tell and we visited some very interesting old pubs in London! Definitely would do it again. We also tasted beer that we may not have chosen if we were travelling on our own!

star star star star star
Nick was an AMAZING guide! He was so knowledgeable and made sure every person had a great time! The beers were great as well. Perfect way to spend a Sunday afternoon