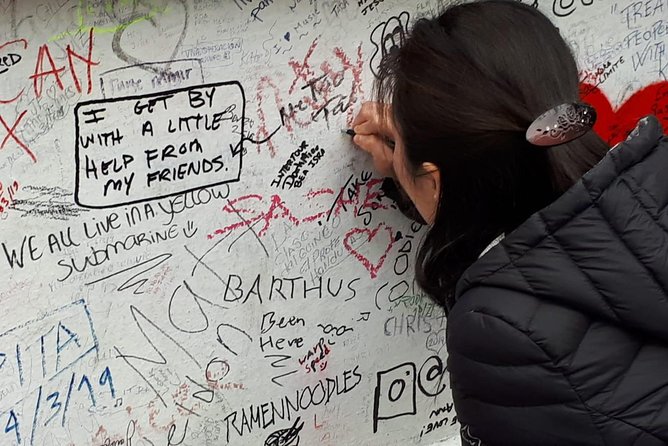 Music lovers! This is the ideal way to discover London's rock music history. Choose either the morning or afternoon tour, or book them both for a comprehensive full day London Rock Music tour. These small-group tours cover everything from rock 'n' roll landmarks in bohemian Soho to the north London neighborhoods of Camden Town and Islington (morning tour 09:00 - approx 12:30) and the heart of swingin' 60s Chelsea and the Kings Road, Kensington, Notting Hill (14:00 - approx 17:30.) And YES you get the St Johns Wood to walk across the famed Abbey Road crossing!

Full Day Tour 09:00
Full-day Rock Music Tour combining the morning and afternoon tour to give you the very best of London's rock music history. Departs 9am.

Afternoon Tour 13:00
Afternoon Rock Music Tour including sites connected with The Rolling Stones, Eric Clapton, the Beatles and much more.

Afternoon Tour 13:30
Afternoon Rock Music Tour including sites connected with The Rolling Stones, Eric Clapton, the Beatles and much more.

GBP 55
p.p. onwards
Itinerary
This is a typical itinerary for this product

Early gig sites, former recording studios, former offices and the theatre once owned by the Fab Four plus McCartney's offices. Fans of Beatles, The Who, Stones, Bowie, Hendrix. See hang outs, clubs and learn of the roots of rock from the jazz, R&B and blues scenes.

See where Amy Winehouse lived, hung out and passed away; Stomping grounds for hippie London, The Clash, then Madness in the 80s, Oasis and their Brit Pop rivalries in the 90s. Glimpse the world-famous Camden Markets and canal

Walk across the famous Abbey Road crossing outside the recording studio.

See the outside of the recording studio used by the Beatles and walk across famous Abbey Road crossing!

Stop by ‘Tin Pan Alley,’ where the Rolling Stones and others cut their first discs, where Ringo bought his drums, early days for Elton John, Bowie, Sex Pistols and more.

Cradle of the punk movement

star star
The Guide was ok but it was the first time pairing with the driver. The driver didn’t knew where to slow down or where he could speed up, so we pass through all the spots too fast.

star star star star star
The guide was great and very knowledgeable. We enjoyed the rock history and the added touch of playing music on the bus that was reflective of what we were seeing.

star star star star star
This was a nice ride through London. The van has huge windows so you can see everything easily even though you're in a vehicle, and it makes stops at all the places you'd want to get out and grab a photo. Clive was our host and he was fantastic. He looked like Eric Clapton which was a bonus.

star star star star star
Booked this tour for my music mad son and brother in law. Unfortunately the van broke down but rather than cancel the guide persevered on foot! The boys said it was amazing, the guide knew so much and they went to so many places and learnt so much! Highlight for my boy was of course Abbey Road - he hasn’t stopped talking about it. Amazing thank you for giving them a great experience :-)

star star star star star
Ian was a superb guide to the rock and roll history of London! He was so funny and knew the fine details of the music and musicians’ history well beyond pointing out the sites. I loved how this tour was like a rock history master class. The assumption going in was you knew the music and you knew the rock stars. So we spent the time on the fine details. This is a must-do if you are a rock music fan going to London. Ask for Ian for the best of this superlative tour through London.

star star star
We were left stranded for the afternoon tour our AM merchandise still on the van. Driver left us behind.

star star star star star
Spending an entire day with Ian on the london rock music tour was amazing! We saw so many sights and his stories made it all come alive. We even got a glimpse of Paul McCarthy going into his driveway! Take the whole day tour!!!! So many things to see! Loved seeing Queens house !!!

star star star star star
Super fun and informative tour. Ian was ghastly fun and informative. Perfect tour guide while still being full of piss and vinegar in a fun kind of way. A man who does not suffer fools but entertains at every turn. Plus he looks like Peter Noonan. I loved seeing Paul McCartney's office and London home and the outside of the church where he married Linda. Great day.

star star star star star
My man Ian sure knew his stuff! He made the trip very memorable with anecdotes about who played and partied with whom and where they lived and played while they were here. Hard to believe how much great music comes from one city! Me with Lee in Front of Freddie Mercury's house. This picture says it all about Lee. The outside of the tour bus Tree outside where Amy Winehouse lived Writing, I'm Only Sleeping on the wall outside Abbey Road studios