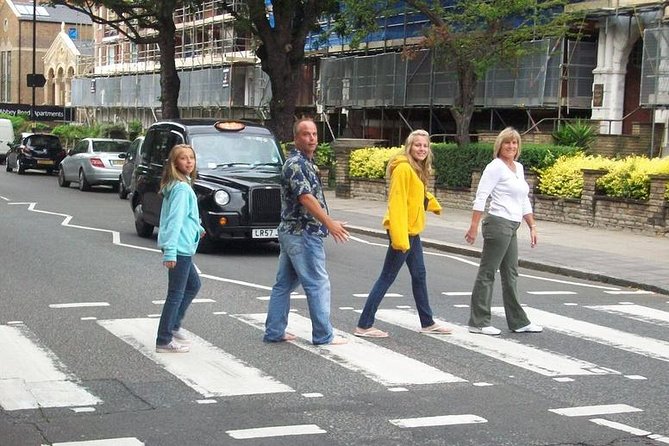 All aboard the magic bus to see where rock legends have played and died in London, the greatest rock 'n' roll city in the world! On this small group tour, get down the backstreets of the capital, hear about rock star adventures from your knowledgeable guide. Visit London's famous clubs, rock hotels, record labels, management offices and studios. This is a panoramic tour with photo stops, including time at the Abbey Road crossing.

INR 4,493
p.p. onwards
Itinerary
This is a typical itinerary for this product

The famed Abbey Rd Studios (see the outside) where you can walk across the famous Abbey Rd crossing!

St. John's Wood, home to a Beatle and the famed Abbey Rd Studios (see the outside) where you can walk across the famous Abbey Rd crossing!

Centre of the punk movement

Freddie Mercury and Queen reigned, Bohemian Rhapsody and more in this area

star star star star star
We really enjoyed our tour with Ian! We had a group of 10 people so it was very easy to hear all the the great information he shared. The tour covered several areas of London we would otherwise not visited. We rode in a smaller passenger van that we conformable and had air conditioning. We stopped mid way for anyone that needed bathroom break and were also able to pick up a small snack. The tour was full of facts and fun details abut many rock bands that we love. Overall we would recommend this tour to all music enthusiasts. In my option small children not advised.

star star star star star
Better than expected on top of the events occurring this week - the Queens death. Jim was extremely knowledgeable providing great insights and tidbits that dug deep in London rock history. Though we expected the 60's era, we did not expect the 70's and punk era included. As lifelong music fans, dating to the early 60's, this was the highlight tour given we more than likely will not be back in London. Highly recommend the tour and Jim as tour guide.

star star star star star
We were amazed at the knowledge of our guide. The queen’s passing caused all kinds of road closures and he managed to navigate and get us to almost everything. Abbey Road Studios and of course the Abbey Road crossing was a highlight.

star star star star star
Wow! We took the tour during all the chaos of street closures and congestion for the Queen’s funeral, and even with the modifications this tour is amazing! Jim was an excellent guide — friendly, funny and knowledgeable. I have a much better understanding now of London and the role it plays in the soundtrack of my youth. Thank you!!

star star star star star
Loved it! Jim was super knowledgeable and had great stories to share. It was a fun afternoon. Bonus was getting to see a lot of London that we wouldn’t get to see on our own.

star star star star star
As a classic rock fan, I absolutely recommend this! Even if you are not a big rock n roll enthusiast. The guide Ian rocked, he knows the business and told some amazing stories. You'll see essential rock places in London.

star star star star star
A great tour with a great guide! Ian was so informative , funny, and fun. It was great being on a bus with a bunch of rock music geeks like myself Jeremy with two of his all time favourites: the Beatles and Jimi Hendrix at Sticky Fingers. Here we crossing at Abbey Road Our minivan parked while we enjoyed refreshments in Bill Wyman's 'Sticky Fingers' restaurant. We attracted lots of attention traveling through London!