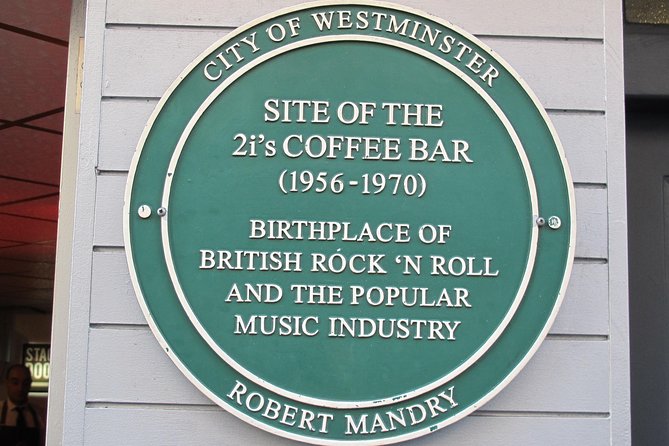 INR 4,493
p.p. onwards
Itinerary
This is a typical itinerary for this product

History of the music clubs from 50s through today

Learnt he history of this amazing venue!

Take a short stroll in your favourites’ footsteps through the narrow, winding streets of what is London’s entertainment district Soho.

Camden is a music playground. Amy Winehouse but also this was the stomping ground for hippie London, The Clash, then Madness and U2 in the 80s, Oasis and their Brit Pop rivalries in the 90s. The list of bands playing Camden venues is long and illustrious

Of course your tour includes time at the famed crossing!

Great guide. An oldies rocker. Told many interesting stories and was engaged.

Saw all of the sites

star star star star star
Highly recommend! This was a great tour and out guide was outstanding. He times the music perfectly with the stops and took a great picture of us crossing the famed Abbey Road. This was fun and there was great music. Really enjoyed this tour, take it, you won’t be disappointed. Minimal walking. Two bathroom breaks along the way. Nice little coach with AC. Marshal speaker was a great touch. Memorable and fun stories.

star star star star star
Our guide for the morning, was very knowledgeable and enthusiastic - an obvious passion for his subject. Being a Sunday morning we were able to get around Lonond quickly and visit lots of interesting sites. £30 for a full-on 3 hours was good value.

REALLY enjoyed this experience! Gave us a great lay of the land to go back and patron some of the venues still operating. Also liked the small group aspect, as we were able to incorporate our individual interests into tour.

star star star star star
An excellent tour. Colin really knew his stuff and we enjoyed all the tales of soho in the 60’s, Islington punk venues, Amy’s Camden and then a visit to Abbey Rd to recreate the iconic crossing. I would highly recommend. Thank you for a great morning!

Loved it, we did the afternoon tour last time and loved that too, would definitely do it again, very informative and a great way to get to see London :-)

Loved this tour also. My granddaughter was thrilled to walk across Abby Road. The tour guide was very knowledgeable about the history of Rock music and we loved the stories.

star star star star star
My daughter, granddaughter and I really enjoyed this tour. Our guide was so knowledgeable about the history of rock and roll in London. I would highly recommend this small group tour.

Fabulous tour!!!
Our guide knew EVERYTHING about the London of the sixties, when I rocked out to the Beatles, Stones . . . and then Queen . . . it was so much fun! Took us off the beaten track to see Freddie Mercury's home and more obscure sites that suited our 'summer of love' interests! He also recommended a visit to 'Trident Studios' - and we thank him for this suggestion. Wish we could remember our guide's name . . . he was the best!!

star star star star star
Excellent tour that takes you to off the beaten path neighborhoods in London. Our guide was funny, knowledgeable, personable. He did a great job of tailoring the tour to our interests and gave us plenty of time at the key sights. It was a terrific way to spend a Sunday morning.
Previous Next
keyboard_arrow_up